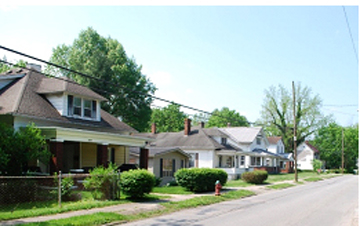 Photo contributed A portion of The McGrorty Avenue National Register Historic District, as it is now known, is made up of 13 African-American homes dating from 1814-1950.

A small, historic African-American neighborhood in Danville has been approved for inclusion on the National Register for Historic Places.

The nomination of the McGrorty Avenue/Old Wilderness Road Historic District was approved by the Kentucky Historic Preservation Review Board on Monday.

The review board is charged with evaluating nominations prior to their submission to the National Park Service (NPS), which will issue a final determination of listing within 45 days of receipt.

However, Danville’s preservation coordinator Joni House told the Architectural Heritage Board at its regular meeting this week that “it’s a done deal.” The district will be named to the National Register for Historic Places because the KHC approved it, House said.

The Kentucky Heritage Council/State Historic Preservation Office administers the National Register program in Kentucky and provides administrative support to the board.

House said research and documentation for the application was funded through a certified local government grant through the Kentucky Heritage Council.

The McGrorty Avenue National Register Historic District, as it will now be known, is made up of 13 African-American homes dating from 1814 to 1950 that reflect an evolution of housing styles, from vernacular to bungalow and Craftsman, according to a news release from the KHC.

The oldest home, being the only brick home in the district, was also very important during the days when hemp was being produced and made into rope, House said.

After the meeting, House said the area is now officially recognized by the United States as being significant for its contributions to the history of our country, state and the city of Danville.

Home owners shouldn’t be concerned that being in a district named on the National Register of Historic Places will restrict what they can and can’t do to their properties. Restrictions are only in place for properties within the city’s historic overlay, which this district is not, House said.

Being on the register “will open up abilities for the property owners to apply for tax credits and get state and federal assistance if they want to do work on the properties,” House said.

“I hope that this recognition will actually help the folks that own the property there to get some tax credits to start working on their properties. It’s an important corridor coming into downtown Danville.”

House said in order to get tax credits for work on their properties, the owners will have to fill out the proper applications. She said the KHC has a “complete staff” that can help with the paperwork.

House also said she will help anyone “get to where they need to go” in order to be awarded the tax credits.

“I feel it’s pretty important to help those folks out.”

The historic district “certainly adds to the tale of the African-American heritage that was here in the area. … Black folks bought a lot of property, but because of segregation, they had to settle neighborhoods.”

House said one of the more affluent African-American residents purchased the property on McGrorty Avenue, which is now named Wilderness Road, and sold lots to other African-American families.”

You can tell that the area is intact because of the narrow road and how the homes are set back off the road, she said.