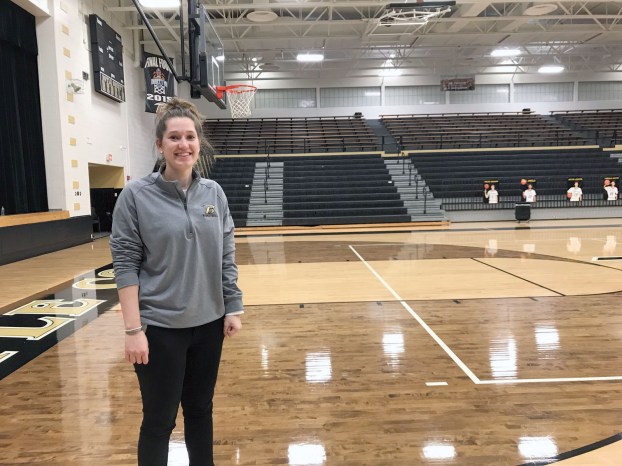 Hayley Hellyer back on the Boyle County sidelines

Boyle County girls’ basketball has a familiar name on the bench this season.

Hayley Hellyer has returned to the Boyle County sidelines. The Hall of Fame basketball and softball star graduated in 2009 and, after a successful collegiate career at Campbellsville University, is now an assistant coach for Greg Edwards.

“I’m excited. This is home, I’m excited to be back,” Hellyer said. “I think this program is moving, coach Edwards has a winning record and I’m learning a lot from him. I think that we’ve got good kids coming up and we can be a successful program.”

Edwards said Hellyer’s addition comes at a good time: Assistant coach Chad Mayes, who has been with Edwards for two decades, took the women’s basketball head coaching position at Asbury University. Another assistant, Chelsea Gill, will also not be on the sidelines this season.

“I’m so glad to have her,” Edwards said. “She played here, she’s one of the top leading scorers here and she’s in the hall of fame. Then she went to Campbellsville, had a great career there and now she’s back. She wanted to get into coaching, she’s been with the middle school the past couple of years and she’s done a great job.”

Hellyer’s career at Boyle County was remarkable for her skill on the court and her longevity playing at the high school level. She played up as a middle schooler for Judie Mason on the varsity level and finished her career third in school history in scoring.

As a sophomore, junior and senior, she was an Advocate-Messenger First Team member. She averaged 17 points per game as a senior to lead the area, and led the Rebels in points, rebounds and assists in her final two years.

She was also a four-year starter on the softball team, primarily at shortstop.

Her career is one that the current players can respect, and Edwards said that her involvement in the middle school for the past two years will only help the connection between the middle and high school teams.

“I always thought we needed a link from middle school on our staff here, just so there’s that connection,” Edwards said. “And we’ve got a lot of young kids on the JV, and that’s good because they’re all comfortable with her. It has worked out well.”

“It’s kind of become a thing where seventh and eighth graders can come up and play with the varsity,” Hellyer said. “It just makes them that much more ready, ready to go when the time comes and they are in varsity. I know it can be nerve-wracking. But I think it’s also good, me being at the middle school and high school. I get to kind of go up with the girls and be that in-between, so they’re ready to go.”

Hellyer said she learns from the current coaching staff and brings her collegiate experience to the table for the team.

“I just try to push them to be the best they can be,” Hellyer said. “Obviously coach Edwards and all of the coaches know so much about basketball, I try to bring what I learned in college and just use that and help motivate them.”

Admirals improve to 6-0 after comeback at Western Hills

FRANKFORT — Trailing Western Hills 24-21 at halftime, Danville’s boys basketball team opened the second half with a 9-0 run and... read more