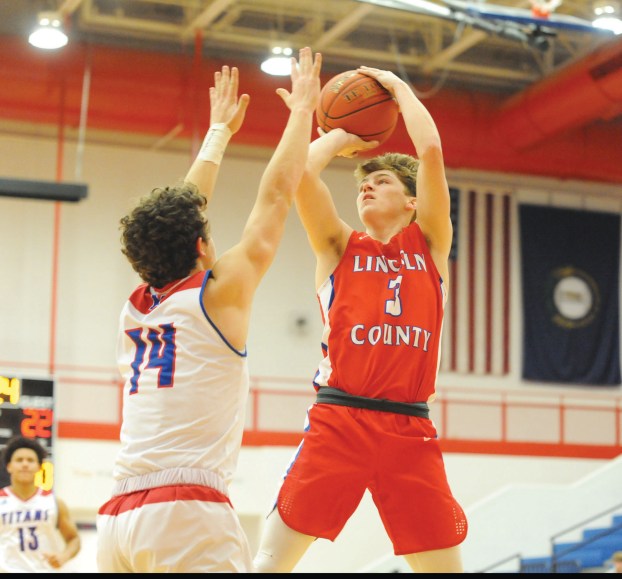 HARRODSBURG — Thursday night’s game in Mercer County was a different kind of challenge for the host Titans and visiting Lincoln County Patriots.

Both teams are battling for positioning in a wild 12th Region, and it was Lincoln who came out on top 59-41.

But Thursday’s contest was, as Lincoln head coach Jeff Jackson described it, ‘interesting.’ The two teams combined for 34 points through the first quarter, then just nine points in the second quarter.

Lincoln’s success came, in large part, due to shutting down Mercer guard Carter Baughman. Baughman ranks among the top scorers in the state but had just nine points, and only two in the second half.

“We did a good job keeping him out of the lane, contesting his shots,” Jackson said. “They’re very explosive and a good offensive team, coach (Josh) Hamlin has done a great job with his kids. We tried to squeeze, keep him out of the lane and contest his shots, take their transition away by having good rotation on that back end.”

Lincoln started the first quarter in man-to-man defense, but by the second quarter had switched to zone. That’s something that the Titans have struggled with all year, and the struggles continued Thursday.

“Coach Jackson does a good job,” Hamlin said. “It’s no secret that we’re going to get zoned. They started out in man and we really kind of exposed them early. We spent shootaround and Tuesday going through zone prep. It’s one of those things, when you get out to a game, it’s not  translating right now. We’re just not being aggressive in it.”

The two teams shared a 17-17 scoreline after one quarter, with 11 different players scoring in the first eight minutes.

“The first half was wild,” Jackson said. “I think they said we were 1-for-15 from inside the arc. It was a funny game, both teams played really hard. I’m proud of our kids for having a better second half, we played much better in the second half. First half, we took some shots too quick and didn’t attack the basket like we wanted to. We wanted to push the ball and try to get to the rim and we stopped and shot jump shots. We wanted to do a better job executing our break.”

Alcorn’s strong game came at a good time for the Patriots: Center Riley Bodner was limited due to foul trouble, and fellow big man Sawyer Carrier went down a week ago at Eastern with a foot/ankle injury.

Alcorn came in for Bodner and scored 17 points, sharing the team high with senior Blake Smith.

“Bryston Alcorn came in and did really well and we had to drop Bryson Yaden in at the five,” Jackson said. “When Riley gets in foul trouble, we get small. But we also get athletic because of Bryston and Darius (Napier) come in. We did some decent things, but we’ll take it. I’m just proud of our kids for playing better in the second half. Any win is a good win when we’re trying to find our way to win and find out who we are. Hopefully as the season goes on we’ll find out who we are.”

Lincoln’s offense picked up in the third quarter, scoring 15 points behind a balanced four-man scoring effort.

“We’re not attacking, and I think it goes back to confidence. We’re just struggling for that in all areas right now. We’re not used to being in that situation. We’ve played an extremely tough schedule, but we seem to have lapses that get us into tough situations.”

The two teams played a more open fourth quarter but the Patriots kept a double-digit lead throughout the final frame to finish with a quality region road victory.

Hamlin said that, as his team rebuilds its confidence, you could see a different Mercer County team.

“I would like to think that we’ve got resilient kids,” he said. “A lot of them have been in other sports. Our record isn’t where we thought it would be or where it has been in the past, but when late January, February comes, we’ll be playing better basketball and we’ll have a chance to make some noise.”

It’s a noisy 12th Region, with plenty of teams in contention for a potential title in the postseason. But there’s a long way to go.

“It’s crazy. Everybody’s playing well,” Jackson said. “There’s honestly 10 teams that legitimately, on any given night, can beat somebody else. If you’re not prepared to play physically and mentally, have a good gameplan in tune with what’s going on, it can get interesting in a hurry. We’ve got to keep focused, keep improving and get better every day, work hard and stay together. Hopefully we will.”