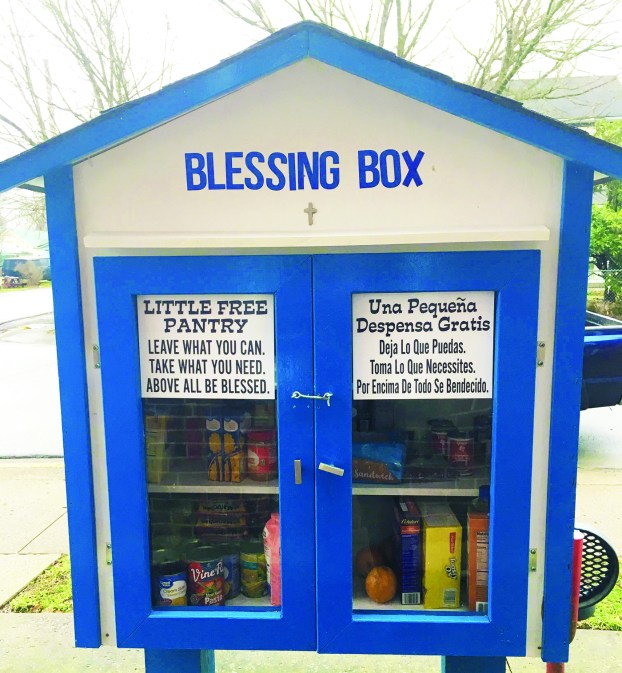 Photo by Merle Baldwin Blessing Boxes are in two locations in Junction City — in front of city hall and The Church, on the corner of Grafton and School streets. Built by Boyle County High School student Victor Gomez as part of an Eagle Scout project, they are meant to help people in need by providing basic food and household staples. Local residents have been keeping the boxes supplied.

Merle Baldwin says people would probably be surprised how many others go hungry over the holidays, and year around, really. As Junction City Chief of Police, Baldwin knows the town.

“There’s a lot of people on a fixed income, or no income, and they’re hungry. It’s everywhere; it’s going on in even in our small town,” he says.

So Chief Baldwin fully intends to keep a watch out over the “Blessing Box” out in front of city hall. He was just stopping to check its contents when he found Rick and Angela King, both carrying grocery bags overflowing with bread, sugar, household items …

“They live here in Junction. Just good people,” Baldwin says about the couple, two of many who have voluntarily helped keep the boxes stocked.

There’s another Blessing Box over by The Church, on the corner of Grafton and School streets, a venue Baldwin and his brother, Kenny, own.

The boxes provide a quick-fix for families in need, providing everything from snacks to kitchen staples, canned goods, beans and rice. Baldwin and his wife recently made sure they were stocked with personal hygiene items, soap and baby wipes. 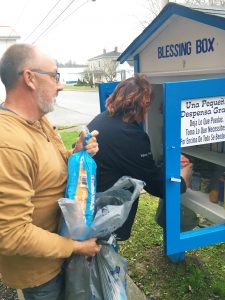 Photo by Merle Baldwin
Rick and Angela King of Junction City restock one of the Blessing Boxes in Junction City.

“I think the one at The Church has some baby food, too.”

Victor Gomez, a Boyle County High School student, came to city council in early November to get approval to install the boxes because he wanted them out by Thanksgiving. He’s aiming to get his Eagle Scout rank, and the boxes were his community project.

Anna Gomez, Victor’s mom, says he always brings up families who may not have enough food, something he thinks about a lot, and really thought about how he could help. He did the whole thing by himself, she says.

Baldwin gets it. And he says everyone, even adults, could learn from Victor’s sense of community, and taking responsibility.

“There’s a lot of children in our local school system who only get breakfast and lunch because they eat it at school. When they go home at night, they don’t eat,” Baldwin says.

Saturday, local resident Roy Miller will be dressed in his Santa suit bright and early, perched up on the bench outside city hall, near the Blessing Box. He will not leave until 100 items are donated, Baldwin says.

People can drop off any kind of non-perishable item to help restock the boxes. Since they were installed in November, they’ve been refilled multiple times — up to three times a day on weekends, and at least every weekday, he says.

“Basically, anything they can use at home, or eat that won’t go bad in the boxes,” Baldwin says.

Soups, canned fruits and veggies, pasta or paper goods, like toilet tissue or paper towels are other examples of what people can donate; Baldwin says the items will be kept inside the police station until the boxes’ supplies start dwindling — he and others have been helping keep them filled.

He says with the steady stream of locals who stop and put things in, the boxes are being kept in nice shape.

“Officers keep a watch on them, and citizens do the same. They’re definitely not there to be abused; it’s not like you’re going shopping and stocking your whole kitchen. It’s to help someone in need,” Baldwin says.

They’re in areas with a lot of foot traffic he says, “and no one knows if they’re putting in or taking something home with them. And that’s alright. We want people to take the items. That’s what they’re there for.”

Santa will be sitting on the bench in front of Junction City Hall, 794 Shelby St. 9 a.m. today (Saturday, Dec. 22) until he collects 100 items donated for the Blessing Boxes.

Check back next week to read more about why Victor Gomez chose to construct and install Blessing Boxes in Junction City for his Eagle Scout project.

Editor’s note: This is the sixth in a series of stories highlighting discussions during a recent Danville City Commission/management team... read more