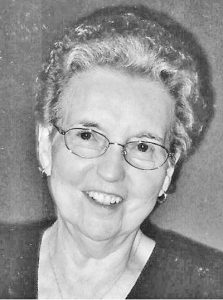 Illa Bell Mullins Carey, 89, of Moreland, passed away Tuesday, December 18, 2018. Born October 11, 1929, she was the daughter of the late Howard and Lula Maxey Mullins. Mrs. Carey was an avid quilter, winning many awards at the Kentucky State Fair with her quilts and teddy bears.

Illa was preceded in death by her husband, Clifton Carey, and by two infant sons.

The funeral service is at 2 p.m., Saturday, December 22, at W.L. Pruitt Funeral Home by Rev. David Smith with the burial in Hustonville Cemetery. Visitation is 5-8 p.m., Friday, December 21, and after 12 noon on Saturday.

A guestbook is available at www.wlpruitt.com