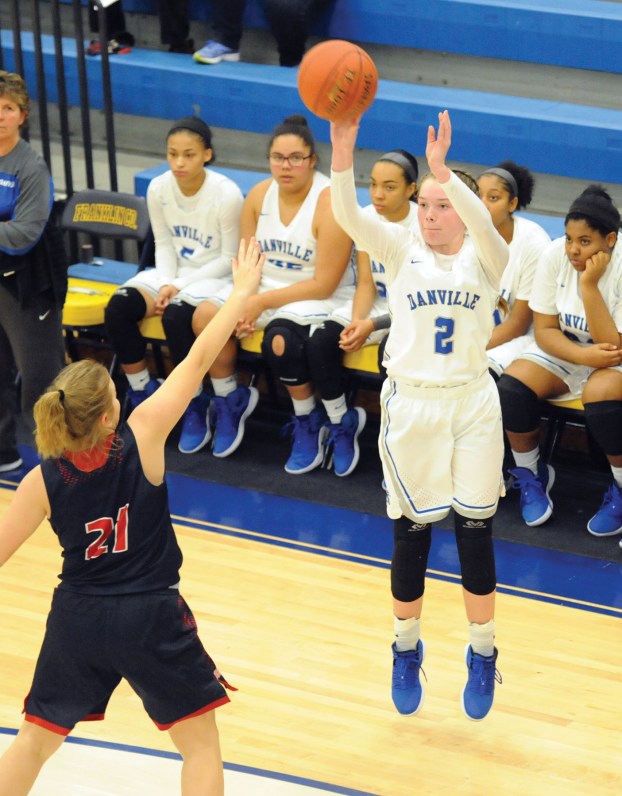 On Friday, Lara Akers took over.

The Admirals improved to 2-0 in pool play in Franklin County’s holiday Hoop it Up after a dominant 70-33 victory over Hopkins County Central.

“Lara finally got out of her shooting slump today, she played well,” Danville head coach Judie Mason said. “I thought today we played more as a team, I was glad to see her hit. And I thought Desiree played well there in the second half.”

Danville jumped out to a 17-2 lead in the first eight minutes thanks to Turner’s 10 first-quarter points. The Admirals kept that pace, scoring another 17 points in the second quarter to take a 34-14 lead into halftime.

Turner had 14 points and Akers scored 10 at the break. No one on Hopkins County Central’s team scored more than four points in the first half.

Mason moved Turner around as the Storm’s defense attempted to key on the Admirals’ star. But Turner’s teammates stepped up: Ahyana Burnett and Tyliah Bradshaw each shared time at the point while Turner worked off of the ball.

“I know everybody is going to key on her, so I’ve been trying to move her around to the 2 and 3 spot,” Mason said. “Because when you put her in that spot, she can be a point guard on the wing. With Lara hitting like that, we’re going to be hard to defend.”

“I know we got a running clock but I was disappointed with the second half,” Mason said. “And I know it’s hard, when you’re up on a team like that. But I told them, we could be on the other end. Tomorrow, we’ve got a really hard team in either Campbell County or Franklin County. We got a little lackadaisical when we got a big lead.”

Mason noted that the Admirals were ahead against George Rogers Clark by 24 points before winning by 10, but against a top-10 team, it’s the result that matters.

“Like I told them, GRC was a big win,” she said. “I don’t care if they did have starters out, mentally more than anything. I thought we played more as a team today because (against GRC), Ivy just carried us. I don’t care if they had their players, Ivy put on a show. She shot 27 free throws because they couldn’t stop her.”

The game against Hopkins County Central could’ve been a trap game, but the Admirals came out hot from the start and took care of business. There were missed opportunities — layups, turnovers, free throws — but Mason said she liked the way her team played on Friday.

“Those layups are going to go, that’s what I told them,” Mason said. “We’re too good of a shooting team for them not to go. I just want to be in the position to shoot layups, and I think tonight, we passed the ball a lot better. We made some really nice passes tonight.”