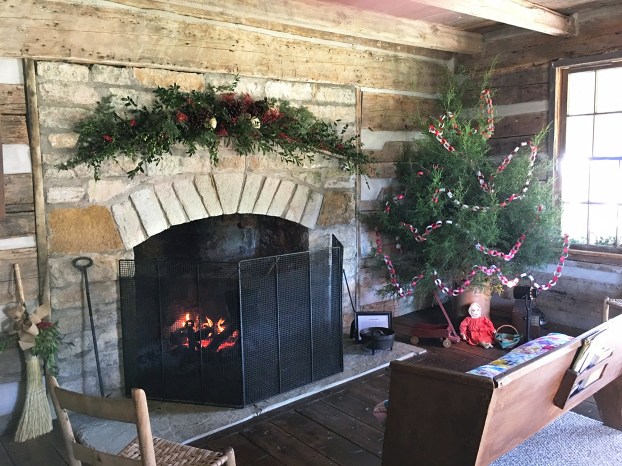 Photo by Brenda S. Edwards An old-time Christmas scene is depicted in this photo of the log cabin on the grounds at Forkland Community Center. A fire in the large stone fireplace with a garland of fresh greens and berries above, a cedar tree with a colored paper garland wrapped around it, and a few toys underneath.

“Who remembers the old-time Christmas days, the days of Christmas on the farm, in God’s free, open country with the table ‘groaning,’ as we in country newspapers like to say, with good things to eat,” asked E.C. Walton, editor of the Interior Journal.

Walton’s article about an old-time Christmas also was published in The Advocate-Messenger in December 1920.

He expressed his thoughts on parents and children and how children who left home earlier would return home to spend the Christmas festivities.

The parents in their places as rulers of the little household and believe us, boys, they were the rulers, he wrote.

“They didn’t need juvenile courts in those days.

“No father of our acquaintance ever allowed spoiling a child. Mothers in those days knew where their daughter was and whom she was with and where her son was and what he was doing.

“We’re not saying the days are evil, but they were a lot different, and we do not know that they have improved any.”

“Man made the city, but God made the country,” is as true now as ever. It is inevitable that the diversities of the city life should change our system of living, that Christmas day even should be affected by it to some extent. But it is rare indeed, in the city, to find a family who is not gathered about the home on Christmas day.

“It is a day when the thoughtless, busy, hustling city professional man or woman gives a thought to mother, when however, busy they may be, their minds go back to the old farm home and the parents by the fireside on Christmas eve and Christmas morning.

“Who would forget the delights of the mystery attending those other Christmas eves or the joys of those awakenings on Christmas morning?”

And who of us that is worthwhile does not upon Christmas morning go back in memory of those dear old ones who no longer are back at the farm but for whom the mysteries of life and death have been solved? Who does not remember the sacrifices they made that our success might be possible? Who does not envision them arrest now in the House not made with hands eternal in the Heavens? And who does not like to believe with Poet J.L. McCreery:

“And ever near us, though unseen,

For all the boundless Universe

Is life; there are no dead.”

“Let us this Christmas dedicate ourselves to the things that are worthwhile in life and let us remember the sacrifices made for us not alone but those who gave us life, but of Him who made the great sacrifice for the sins of the world and whose birthday we commemorate two thousand years after the cruel vengeance of the mob was wreaked upon Him.

“Christmas will live so long as good exists in the world. The resurrection of Him who walked by Galilee’s shores, is but typical of the second life of those for whom He walked up Golgotha’s sided bearing His cross.

“Let us let nothing disturb our old-fashioned Christmas faith in the things are really worth while, not only in this life, but as the higher preparation for that which will be ours ’beyond the river.”’

It’s usually children writing letters to Santa, but back in December 1899, it was the other way around. The Kentucky... read more