file photo The mural shown in process, on the side of Derby Shoppe and Ragg's was a community endeavor.

The year of the mural in downtown Danville

In 2018, downtown Danville gained four public art murals. One of them generated a lot of controversy.

In late January, the Danville Architectural Heritage Board approved the city’s first mural in the downtown historic district following a discussion of what the AHB considers art, logos and signage. The Community Arts Center submitted a design with the words “Art Local Danville, Ky.” 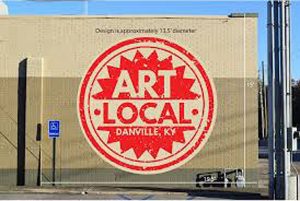 File photo
A designe created by Brandon Long, the Art Local logo was the first mural approved in Danville.

Director of marketing and development Kate Snyder told the AHB, “This piece of art that will go on the wall is something that will reflect Danville’s value of the arts, that Danville as a city is leaning into its arts identity in terms of tourism.”

Board member Julie Wagner said she was grateful to the CAC for “paving the way” and becoming the first official test case for the AHB’s new guidelines for public art.

The board continued discussion about if the circular design, which was going to be pained on the side of Sherwin William’s building facing the CAC, was really a logo and not art.

Snyder said the mural image was promoting a concept and wasn’t advertising a specific business or service.

The second mural brought before the AHB for approval was submitted by Heart of Danville executive director Nick Wade in late March, to be painted on the side of the Derby Shoppe and Ragg’s building on Third Street. This time, the ultra contemporary mural to be painted by nationally known muralist Andee Rudloff was unexpectedly denied in mid-August, after the Heart brought more detailed information about the mural before the board. The Heart appealed the decision, arguing the AHB denied the project based “entirely on artistic preference.”

Public opinion was strong both for and against the AHB decision, so the board held a special public opinion meeting. But a couple of days later, the board formally denied the mural, even though the Heart had already commissioned the artist.

The Danville City Commission held a special called meeting to hear the Heart’s appeal in early September. Snyder said then, “The question that seems to be the sticking point is … can contemporary art be successfully woven into historic communities?”

After hearing the Heart’s appeal, and community members speaking for and against the mural, the city commission overturned the AHB’s original decision, which allowed the project to continue. The mural was completed, with the help of the public, in late September.

The third mural approved by the AHB was for the Sister Cities Commission to have international muralist Dee Craig, of Carrickfergus, Ireland paint on the side of Elmwood Inn Fine Teas. This time the approval was given without a hint of debate. The mural was unveiled in mid October.

The fourth mural was painted by Ryan “ARCY” Christenson of Connecticut during the Soul of Second Street Festival in early August. It’s a portrait of well-known Danvillian Bunny Davis.

No definite plans on where to hang the artwork were made at the time. In September, the AHB approved Janet Hamner’s request to hang the mural on a brick wall between her building at 103 S. Second St. and The McDowell House.

The historic building at 311 W. Main St., which was at one time in danger of being demolished, is in... read more