Ben Kleppinger/ben.kleppinger@amnews.com A rendering of what the new Boyle County track facility could look like is displayed on a projector screen during last week's Boyle County Board of Education meeting. The track facility project has been put on hold, possibly for a year.

Plans to renovate and improve Boyle County Schools’ track facility have been put on hold due to estimated costs exceeding the expected budget.

Boyle County Board of Education members agreed last week that the project to build new bleachers, locker rooms, a press box and concessions space at the track wasn’t urgent enough to warrant the new estimated cost of about $2.2 million at this time.

Architect Tony Thomas walked board members through the design of the facility at the regular December meeting, showing them some changes made to try to bring the cost down. But even after the changes, the price tag for construction alone — not counting any “soft costs” — was $2.2 million, far exceeding the previous estimated cost of $1.687 million.

“That’s why I immediately threw up the red flag,” and brought the issue first to Superintendent Mike LaFavers and then the board, Thomas explained.

Clotfelter Samokar, the architectural firm Thomas works for, could redesign the new facility to try to bring it within budget, but only by substantially reducing the functionality the board had hoped to add, Thomas said.

LaFavers said the easiest cuts would involve building only two locker rooms instead of four, and removing some of the bleacher seating.

“My initial thought is we’ve got three projects for sure right in front of us,” LaFavers said. The new Boyle County Middle School currently under construction and the planned renovation of the old middle school to serve as the new Woodlawn Elementary School are the other two.

LaFavers said soft costs for construction can often equal 18 percent of the base construction cost. That would add almost $400,000 to the $2.2 million estimate.

Athletic facilities can’t be paid for through bonding like schools can — the money has to come directly from the district’s general fund. Because of that, LaFavers said he was uncomfortable moving forward with the track facility upgrade, especially since the district doesn’t yet have a firm estimate on the cost for the Woodlawn upgrade.

The Woodlawn project has previously been roughly estimated at just over $3 million.

“I would hate to execute this project … and Woodlawn ends up bing $3.8 million or something,” LaFavers said. Such an outcome could put a lot of pressure on the school’s general fund. 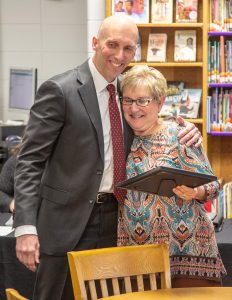 Ben Kleppinger/ben.kleppinger@amnews.com
Boyle Superintendent Mike LaFavers, left, congratulates Board of Education Vice Chair Julie Jones for her time serving on the board during Jones’ last meeting in December.

“I still think it’s a project we have to do,” LaFavers said in recommending the board hold off for a year on the track upgrade. “My only point is we do not know what the cost of Woodlawn will be.”

LaFavers said in a year, the district will have a much better idea of whether it has the funds for the track project. The board members all said they agreed with that position.

Vice Chair Julie Jones questioned whether delaying the project would create trouble for the district with the Kentucky Department of Education (the district has already submitted the initial financial paperwork, called a BG-1, for the track facility project, to the state). Thomas told her he believes KDE would “probably approve” of the decision, since it shows the district is putting its instructional-space needs ahead of its athletic-facility needs.

When the board approved the BG-1 for the track facility in September, LaFavers said it would “take a lot of pressure” off the high school’s turf field.

The improvements include “expanding the current facility to house locker rooms, restrooms, concession stand and press box, while increasing bleacher capacity to nearly 800,” according to district Communications Director Jennifer Broadwater.

“The project would give our athletic teams much-needed functional spaces, while more evenly distributing usage between the turf field and the grass field,” according to Broadwater.

LaFavers said right now, usage between the turf and grass fields is split about 90/10; the improvements would result in about a 70/30 split instead.

The board also said goodbye last week to a board member and a district-level official.

Board Vice Chair Jones was congratulated by LaFavers for serving on the board for more than eight years, more than five of those as vice chair. The December meeting was Jones’ last; she did not seek re-election in the November general election.

“Ms. Jones has been an invaluable asset to the Boyle County Schools,” LaFavers said. “As an advocate for the staff, students and community, Ms. Jones was always willing to listen. During her tenure, she was thoughtful and caring, and made everyone feel special. She will be greatly missed.”

LaFavers also announced that Communications Director Broadwater would be leaving to take a position with the Norton Center at Centre College.

In other business, the board voted unanimously for architects to proceed with the color palettes selected for the floors, walls, ceilings and more in the new middle school building.

The approval was made “in general” — color selections must still be finalized for some areas, most notably the collaborative classroom spaces off of the library.

LaFavers said a committee put together to guide color selection and teachers who would be using the space would be consulted before selections for the collaborative spaces are finalized.

A month and a day ago, NASA’s InSight lander successfully touched down on the surface of Mars, bringing humanity as... read more