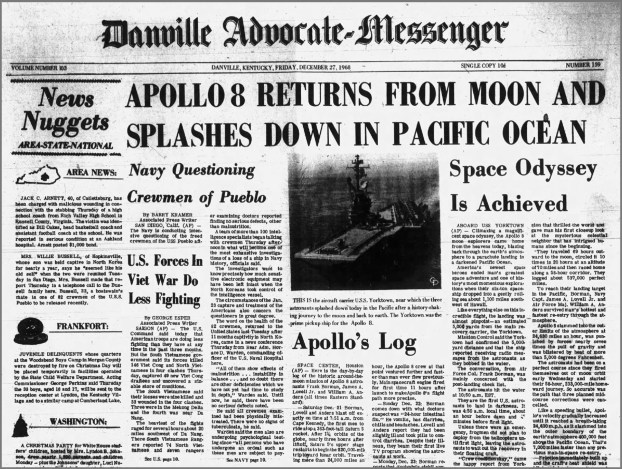 A month and a day ago, NASA’s InSight lander successfully touched down on the surface of Mars, bringing humanity as close as it has ever been to understanding how the Red Planet works and rocky planets, including our own, form in the first place.

NASA has been making headlines in inspirational ways for decades, as the front page of The Advocate-Messenger from 50 years ago today demonstrates.

“Apollo 8 returns from moon and splashes down in Pacific Ocean,” shouts the headline at the top of the page. “Space odyssey is achieved,” the main subhead reads.

The front page actually featured four stories about the successful completion of the Apollo 8 mission, in which astronauts Frank Borman, James A. Lovell Jr. and William A. Anders “traveled 69 hours outward to the moon, circled it 10 times in 20 hours at an altitude of 70 miles and then raced home along a 58-hour corridor.” Another story inside focused on the wives of the astronauts.

In November 2018, thousands live-streamed the NASA control room in the final moments of InSight’s landing; in 1968, the closest experience available was possibly the day-by-day NASA log of the Apollo 8 mission, reprinted in its entirety in The Advocate-Messenger, noting even such minor details as when one of the astronauts caught a 24-hour bug.

The paper also ran articles telling the life stories of the astronauts and listing all the “new firsts for space” that the Apollo 8 mission accomplished. Among those firsts: 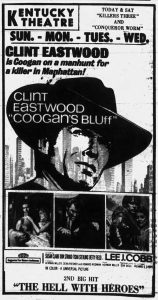 • “It demonstrated the Saturn 5 rocket can launch men safely to the moon.”

• “It proved the pinpoint accuracy of guidance and navigation systems and of good quality two-way voice communication at lunar dispatches.”

• “It sent good television pictures from lunar orbit and from points in space between moon and earth.”

The lead story was brimming with joy about the successful space mission:

“Climaxing a magnificent space odyssey, the Apollo 8 moon explorers came home from the heavens today, blazing back through the earth’s atmosphere to a parachute landing in a darkened Pacific Ocean.

“America’s newest space heroes ended man’s greatest space adventure and one of history’s most momentous explorations when their six-ton spaceship dropped into a gently rolling sea about 1,100 miles southwest of Hawaii.

“Like everything else on this incredible flight, the landing was almost pinpoint — an estimated 5,000 yards from the main recovery carrier, the Yorktown. Mission Control said the Yorktown had confirmed the 5,000-yard distance and that the ship reported receiving radio messages from the astronauts as they bobbed in the water.”

• Advocate-Messenger Editor W.C. Alcock had a front-page essay on the importance of birds of prey and why policies around the U.S. of incentivizing farmers and hunters to kill hawks and owls would be harmful in the long run. “With only about 30 years more to go to get to the 21st century, it is tragic to think that man — the only deep-thinking animal of all the creatures — has but scratched the surface in a futile effort to learn how to live with himself and his environment,” Alcock wrote. “If you can forgive that somewhat philosophical beginning, we will say here that the story that follows deals with man and his attitude toward harks, owls and vultures — an attitude that is now still so out-of-date, we feel called upon to try to change it.”

• U.S. forces fighting the Vietnam War were “doing less fighting than they have at any time in the past three months,” according to an AP report.

• The Clint Eastwood movie “Coogan’s Bluff” was showing for four days at the Kentucky Theatre. “Clint Eastwood is Coogan on a manhunt for a killer in Manhattan!” read the ad.

Victor Gomez is working toward his Eagle Scout badge. He could’ve made a birdfeeder or a park bench, but he... read more