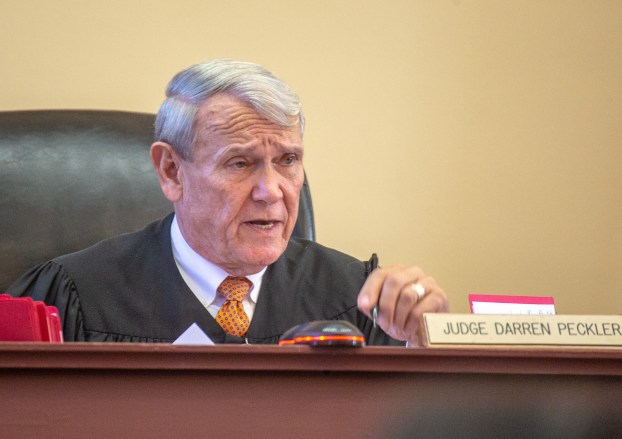 Boyle and Mercer counties are two of only seven counties in Kentucky without a state-certified drug court.

But there is a “local drug court” at the circuit court level, run by Judge Darren Peckler. And Peckler says his local version of drug court is more effective and cost-efficient than running a state-certified drug court.

“Our numbers are as good as any of the state drug courts around,” Peckler said this month, in the first interview he has granted The Advocate-Messenger since practices in his courtroom came under scrutiny during a study of the local jail and criminal justice system.

“It is a very personal contact, one-on-one — very individualized treatment program,” Peckler said of his Intense Substance Abuse Treatment and Rehabilitation Probation Program. “… We use local counseling services to help (participants), plus it’s the continued monitoring by the probation officers for the extended period of time thereafter … they’re looked after for a longer period of time. That’s why I think it’s more appropriate — that’s why I think we do our best work, because we have a longer monitoring term.”

January 2019 will “mark the start of the 20th year” for Peckler’s local program, according to a news release from Peckler’s office.

“The program began in January 2000 and has had approximately 350 plus graduates with a little less than a 10-percent recidivism rate, making it a very successful program,” the release states. “The court would gratefully acknowledge the remarkable supervision and guidance that has been provided to the participants by the local Probation and Parole officers in Boyle and Mercer counties. It also is more than appropriate to acknowledge the invaluable individual substance abuse counseling provided by the local counseling programs Bluegrass.org (formerly Comprehensive Care), CAFCA and the local AA/NA groups.”

Potential participants in the program are sometimes identified pretrial, meaning before they are convicted of a crime. Peckler said if someone successfully completes a short-term rehabilitation program, that’s taken as a good indicator they would be successful in the local program. Often, the commonwealth attorney will offer “favorable” plea bargains to those individuals, which “helps out quite a bit,” Peckler said.

Mostly, its left up to Peckler and Probation and Parole officers to identify potential candidates for the program, he said.

“We’re running through about 15 and 20, maybe more, a year,” Peckler said of the number of people selected for the program.

“All of this has been accomplished with no additional costs to the state, county or city governments and has at its disposal all of the facilities and programs provided by the state Department of Corrections, including social service clinicians, job placement, job counseling, substance abuse evaluations and a wide range of other valuable services.”

Peckler said the heavily involved, personal nature of his program, along with much more extensive involvement from Probation and Parole are two key elements that don’t exist in state-certified drug courts.

Peckler said the state drug court program “as it’s currently run is a very committee kind of run program. It’s a bit standoffish and it doesn’t really get into that kind of a personal connection that I think the Probation and Parole officers and I have with the individuals that come through our court.”

“There are some other issues I have with actually the lawfulness with some of that (the state drug court), but that’s a different story,” Peckler added.

Kentucky’s certified drug court program is a “shining example of Kentucky’s success in specialty courts,” according to information on the program from the Kentucky Administrative Office of the Courts.

“Kentucky Drug Court was created in 1996 to assist individuals who have entered the criminal justice system as a result of drug use or drug-related criminal activity and are choosing to achieve and maintain recovery,” according to the AOC. “Drug Court combines close court supervision and treatment with other services to intervene and break the cycle of substance abuse, addiction and crime.

The AOC states there is now “irrefutable evidence” that Kentucky Drug Court is achieving results: “For more than 20 years, the program’s solid track record has convinced leaders in state government, along with local judges, prosecutors and treatment providers, that drug court is an essential part of the Kentucky court system.”

Out of Kentucky’s 120 counties, 113 have state-certified drug courts. Along with Boyle and Mercer counties, the others without such courts are Carroll, Owen and Grant counties in northern Kentucky; and Todd and Logan counties in southwestern Kentucky.

The lack of a state-certified drug court in Boyle and Mercer counties is identified as a problem in the recently completed Boyle-Mercer Detention Center Study. The 354-page report compiled by consultants working for Brandstetter Carroll attempts to identify issues causing overcrowding in the Boyle County Detention Center and recommends construction of a new 450-bed jail facility.

Among numerous recommendations for changes to case processing is a recommendation for Peckler to request assistance from the AOC and work with others in Boyle and Mercer to develop a plan for a state-certified drug court.

Peckler’s local program “does not have sufficient resources and format to be considered a truly functional drug court,” according to the study.

But Peckler said he believes there are advantages his program has over the state drug court.

“Number one, we don’t cost any more money. And we have, I think, a pretty successfully running program. Overall, I’m very pleased with what we’ve been able to accomplish so far,” Peckler said. “… The state has to pay so much for every (drug) court and then they have a grant system they have to go through and there are certain almost like protocols where they have a book of things they have to follow and do all of those things. They’re very, in my mind, restrictive in what it is that they’re able to do and they really can’t explore much of the alternatives that are available through Probation and Parole officers working with people.”

Dr. Allen Beck, a lead consultant on the jail study, acknowledged when he presented the final study in November that a state-certified drug court would come with a price tag. But he said the cost would be worth it.

“We do need to have a drug court,” Beck said. “We don’t have what you would call a drug court. It may take some resources. It may cost us something … but it may have a much greater impact than what we have now.”

Peckler said the pretrial aspects of his program and Probation and Parole’s involvement are examples of how his program is unique.

“Most of the state drug courts exclude the probation and parole factors completely — well maybe not completely, but only at the very end,” he said. “… Pretrial is a very insightful piece of information that the state does not utilize.”

The Advocate-Messenger requested interviews with Probation and Parole staff who work with Peckler in his local program. As of press time, a Department of Corrections spokesperson had yet to confirm whether an interview would be granted.