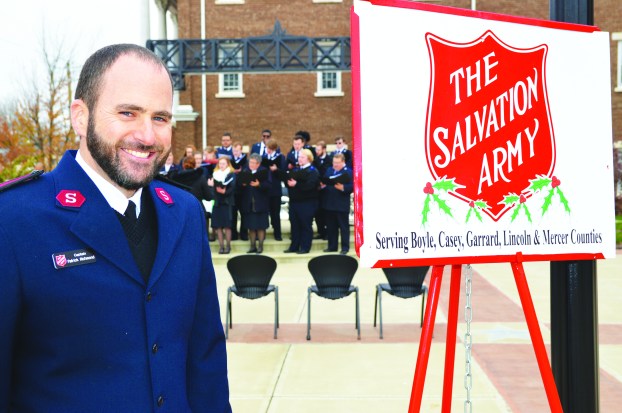 File photo by Bobbie Curd Capt. Patrick Richardson says he and his wife, Maj. Carey Richardson, don't head up The Salvation Army of Danville for the paycheck. "We do it because we love the people."

The local Salvation Army hoped to raise $110,000 from its annual Red Kettle Campaign. Instead, it raised $120,826 as of the final count on Christmas Eve.

“It was amazing — absolutely amazing,” said Capt. Patrick Richmond. He took a few minutes to relay the good news while on holiday vacation with family in Mobile, Alabama, after the holiday rush. He and wife Maj. Carey Richmond man the local post in Danville. 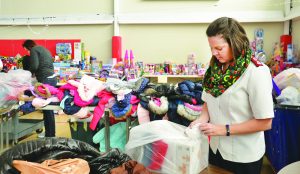 File Photo by Robin Hart Major Carey Richmond, with the local Salvation Army, begins to untie a Christmas Angel’s bag of gifts to make sure it contains everything the child is supposed to receive for Christmas.

He said of course, the whole initiative would have been for naught if they hadn’t had the thousands of volunteers pitching in.

“Dana Long was our kettle coordinator, a volunteer. She did an amazing job. Our advisory board filled holes in the ringing schedule at the last minute,” Richmond said. “… Our sponsors, Danville Office Equipment, a private family, Stuart Powell dealership, we also had Lee’s Famous Chicken …”

The campaign lasted 32 days, with bell-ringers working in seven locations. Richmond said the Salvation Army pulls in about as many volunteers during the seasonal rush for the kettle drive as it does during all the rest of the year combined.

“You could probably add a couple thousand to a full total of volunteers over the course of last year; the majority of all those volunteer hours are for the kettle drive,” Richmond said. Last year’s volunteer count, from Oct. ‘16 through Sept. ‘17, was 4,915 people with 11,046 donated hours of work.

“We serve Boyle, Casey, Garrard, Lincoln and Mercer,” he said. “We had kettles in Liberty, Stanford, Harrodsburg and Danville …”

Richmond said the response to the Angel Tree program was phenomenal. Because of the community’s giving, 149 families were served, including 400 children.

“Our families came in, heard ‘The Christmas Story,’ were prayed over individually, given a Kroger gift card, provided by the community, a frozen turkey, a gift basket and all the gifts that were donated,” he said.

Richmond said simply put, he and his wife are “blessed to be here.” This is their third Christmas on their post in Danville; they’ve had previous posts lasting for anywhere from a year to four.

“It’s hit or miss. When the army decides to move us, they move us,” he said. “For us to be here three years, we’ve considered every year a blessing. This whole community is amazing. Danville is amazing.”

Boyle and Mercer counties are two of only seven counties in Kentucky without a state-certified drug court. But there is... read more