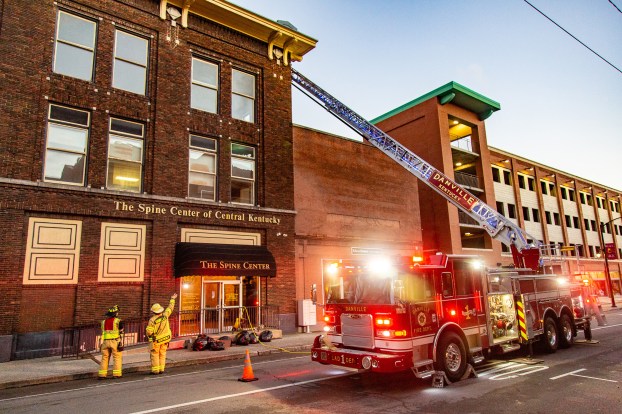 Ben Kleppinger/ben.kleppinger@amnews.com Danville firefighters used their new ladder truck Friday evening to access the roof of the Hub building while they investigated a suspicious smell.

A suspicious smell forced firefighters to evacuate two downtown Danville businesses Friday, but the problem turned out to be minor and easily fixed. 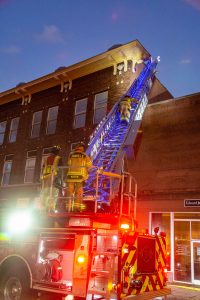 Ben Kleppinger/ben.kleppinger@amnews.com
A firefighter climbs to the roof of the Hub building Friday evening.

Third Street from Main to Walnut was closed from around 4 p.m. to shortly before 7 p.m. Friday while firefighters investigated reports of a strange smell inside the Hub Coffee House & Cafe and the Centre College Bookstore.

Hub employees said when they began to smell something, they walked to the bookstore and discovered the smell was even worse there.

Danville Fire Department sent seven firefighters to the scene, along with the department’s new ladder truck, which was used to gain access to the roof of the three-story building. Battalion Chief Gabe Heatherly said firefighters detected unusual amounts of volatile organic compounds in the air inside both businesses. They evacuated “out of an abundance of caution until we figured out why we had the readings in our monitors.”

A third business in the building, the Spine Center of Central Kentucky, was not evacuated because no volatile organic compounds were detected inside.

It turned out workers had been cleaning the roof with mineral spirits. Those spirits had been left behind or spilled in some way that caused people in the businesses below to smell them, Heatherly explained.

Firefighters ventilated the building thoroughly before people were allowed to re-enter.

Heatherly said the new ladder truck was helpful in this situation and has been seeing a lot of action recently, even on runs where a ladder isn’t absolutely necessary, because the department wants its firefighters to have as much practice with the ladder as possible. That way, they’re comfortable using it when it counts.

“It’s a good tool to have in service for the city,” Heatherly said. “With these downtown buildings we can access the roof quickly.”

Firefighters were on the roof of the Hub building within two minutes of arriving at the scene Friday, he said.

In order to get up there, they had to thread a needle — the ladder had to reach under and then behind the Hub building’s corner eave in order for firefighters to get onto the roof. Heatherly said his team executed the tricky maneuver perfectly, proving the practice is paying off.

The Arts Commission of Danville-Boyle County has named Vince DiMartino the 2018 Arts Citizen of the Year. File photo by... read more