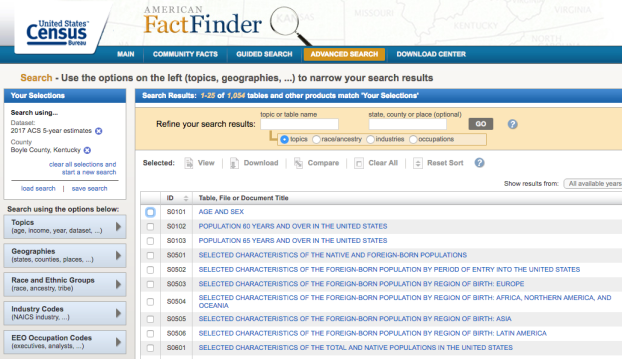 The U.S. Census released its American Community Survey’s annual 5-year estimates this month, providing a wealth of statistics about the population in Boyle County.

“The ACS is the most relied-on source for up-to-date social, economic, housing and demographic information every year,” according to the Census. “… The ACS is the only source of local statistics for most of the 40 topics it covers, such as educational attainment, occupation, language spoke at home, nativity, ancestry and selected monthly homeowner costs.”

In the area of jobs, the new ACS data says 79.7 percent of Boyle Countians work for private businesses, while 14.6 percent work for federal, state or local governments and 5.6 percent are self-employed without an incorporated business.

The industry that employs the most people in Boyle is “educational services and health care and social assistance,” which includes an estimated 28.5 percent of all Boyle jobs. Manufacturing jobs are second at 17.4 percent; then retail jobs at 11.1 percent. Jobs in arts, entertainment, recreation and food services represent 9.8 percent of all jobs.

When it comes to household income, 69 percent of Boyle’s households include someone making money at a job. A little more than 41 percent of households have Social Security income; and 24.4 percent — nearly one in four — have retirement income.

From 2013 to 2017 — the five-year time span the ACS data is taken from — 14.2 percent of Boyle households received benefits through the Supplemental Nutrition Assistance Program (SNAP).

Single-family homes dominate the residential market in Boyle County, with more than three-fourths of households living in houses. About 18 percent of households live in apartments in multi-unit structures, while 6.6 percent live in mobile homes.

About one-third of men in Boyle County have never been married, while the same is true for just 26.7 percent of women. Almost half (49 percent) of men are currently married and living with their spouse; the number is 46 percent for women. While 2.1 percent of men are widowed; 10.8 percent of women have lost their spouse. The divorce rate is the same for both men and women — 13.6 percent.

Of an estimated 4,002 young adults in Boyle County (ages 18-24), only 275 — 6.9 percent — did not have a high school or equivalent degree. Almost half — 49.9 percent — had attended some college or received an associate’s degree. Just 4.5 percent had obtained a bachelor’s degree or higher.

‘Tis the season to skate

Skate on Main, the iceless skating rink in downtown Danville, is attracting a steady flow of visitors this season, said... read more