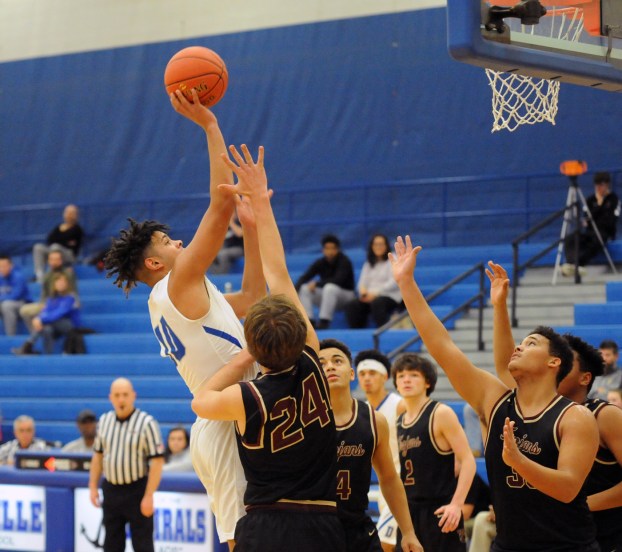 Danville basketball is off to one of its best starts to a season in decades.

The Admirals are 12-1 entering 2019 after a pair of wins on Friday in their Hilliard Lyons Holiday Classic, and with five wins already in region play, Danville has its sights set high in the new year.

It’s something that head coach Ed McKinney brings up quite often with his players: They have the potential to be special. But they’re not there yet.

“We talk about that a lot. I think a lot of it comes from them, it’s just rare to get this many players in the same era,” McKinney said. “You’ll get one or two, and it just seems that this year we’ve got a bunch of guys from that sophomore to senior class who can play. This is different. It’s hard to tell a high school kid that this collection of kids is special. You don’t want to waste a chance on it. I think, to be honest, we can get a lot better.”

That was evident in a 51-40 loss to Wayne County last week, a game where the Admirals hit just two three-point shots, their lowest total of the season.

It was a learning experience for a team that had already beaten Wayne earlier this season.

“We learned that we’re not unbeatable, we have our own faults,” senior DeShaud St. Martin said. “On nights that we’re not shooting the ball well offensively, we can be beat, no matter how good our defense is. We played really good defense against Wayne County, we just couldn’t score that night. I feel like we understand that we have to execute our offense more to be a better team and be the team that we want to be.”

Defense hasn’t always been Danville’s calling card: The Admirals have given up more than 61 points once this year (a 75-61 win). Just last year, the Admirals allowed more than 60 points seven times before the new year.

“We all realized during the preseason, the seniors, we realized that we have to give it our all,” St. Martin said. “To be a good team defense, that’s the main thing. So we just bought into what coach has said, which is to cause havoc on defense and we can guard anybody in the region.”

One huge benefit to an improved defense is practice. The Admirals have had their full complement of players since the middle of November, a rarity in recent years with the Admirals’ success on the football field.

“We just came in before this season started and started working,” senior Zach Thornton said. “Last year, we weren’t all together because of football. We got all together and got in the gym and worked our butts off.”

That effort hasn’t gone unnoticed from the head coach, and it’s not a specific player or class that has contributed to that improvement.

“Last year we just didn’t come to play when we needed to,” Thornton said. “I wouldn’t call it a mindset change, it’s just knowing that we have players around us who can finish the ball. All of us can score at any time so we’re distributing to anybody.”

Danville’s offense has looked great at times and not so great at others. Just look at Thursday’s contest: The Admirals scored 20 points in the first quarter, four points in the second and 37 points in the third.

“We’re still wasting possessions. It’s hard, when you get up and you know that you might win, you tend to get sloppy,” McKinney said. “We’ve still got a ways to go, and it’s hard to coach that when you’re up 20 or 30. I do think, that’s one of the things that you can flip on and off. When it’s a four point district seeding game, you might not force those passes.”

St. Martin said he and his teammates know they have to be better on offense if they want to reach their goals this season. The selflessness of the team has helped the offense flow, now it has to become more efficient.

“I feel like we have more chemistry. The football players came back earlier, that helped us, having more time to get used to each other,” St. Martin said. “I feel like there’s not much selfishness on the team, everybody just wants to win. That’s the main goal. Nobody is really worried about who’s scoring the most, it’s about getting the win each night.”

Wins will be tough to come by, and Danville’s already seen it in two games against Wayne County and wins over West Jessamine and Mercer County.

“The West game was a battle. Mercer was tough,” McKinney said. “I think we know that we’re not going to win district or region with a B-plus game. You’ve got to have your A game. The same thing is true for other teams, it’s whoever plays well in the big games to win them. Against the best teams in the districts and region, the margin is slim. And you know how those games get, the possessions get cut down. Things slow down, each possession gets more valuable because there’s less of them.”

Districts start with a bang for the Admirals on Friday, when they’ll travel to Lincoln County.

“It’s going to be one of six very good district games,” McKinney said. “And then we go to the All-A right after that. These four weeks coming up, that’s a big, big piece of your season. It should be a great environment Friday night. They’ve got a very good team, they do things right and they’ve got a lot of guys playing well.”

St. Martin said they know just how good the district — and region — is this season, and no game can be taken lightly.

“Our focus going into districts is to play our game, execute our offense and be intense on defense,” he said. “We know Lincoln County is a good team, Boyle County might have their struggles but they’re a good team, Garrard County has a great scorer in Brayden Sebastian. We have to be focused going into districts and capture that No. 1 spot. That’s the goal, then make it to the region championship.”

Danville’s benefitted from a deep bench this year. Practices have been more intense because players are fighting for minutes.

“Coach is on us pretty tough right now because he knows we can have a great team,” Thornton said. “He wants us to do our best.”

That’s evident in the post with St. Martin, Ethan Wood and Darrian Bell all deserving minutes in the post.

“There’s no off days in practice. It’s a battle every day, especially down in the paint with our size,” St. Martin said. “Our guard play is a lot better. We’ve got freshmen competing and helping us get better. Practice is hard.”

Danville’s size could be an issue for area and region teams, but it’ll take an efficient offense to get consistent looks at the rim, particularly in district games when the pace of play slows down.

“The game turns into making fewer mistakes than the other team,” McKinney said. “That’s not a bad way to play. Some people might say, ‘well you’re playing tight.’ But in big games, you want to make fewer mistakes than the other team and be efficient. When you’re playing a district tournament and the stands are packed, that’s not something the coach does. That’s a product of the environment you’re in.”

By LARRY VAUGHT No one should have a better feel about what might happen in Saturday’s Kentucky-Louisville basketball matchup than... read more