Ninety-one years ago today, the Danville chapter of a national environmental preservation organization was making plans to host the annual meeting of all Kentucky chapters.

The Izaak Walton League of America was founded in 1922 by a group of Chicago sportsmen who wanted to protect fishing opportunities for many years to come. The group was named after Izaak Walton, who was known as the “father of flyfishing” and died in 1683.

The Izaak Walton League of Kentucky held its first meeting in 1927 in Lexington. According to the Jan. 3, 1928, edition of the Danville Daily Messenger, “It was not as some supposed, just a bunch of fishermen, but on the contrary that type of men and women who are interested in our forests and streams and the little wild life that is all but gone.”

John R. Yeager, chairman of the convention committee wrote that during that first meeting, the Izaak Walton League of Danville invited the group to hold their next annual meeting in Danville. They felt this area was the best place to hold the annual gathering because of the “interesting conditions” being the Dix Dam, Herrington Lake, the site of Kentucky’s first state capitol, Dr. Samuel McDowell’s famous surgery and the Kentucky School for the Deaf.

The Bowling Green chapter of the Waltonians had also wanted to host the meeting, but lost its chance by only a few votes. However, “Had it been known at the time that the great Mammoth Cave idea was to be launched, Danville would have acceded to the wish of Bowling Green, for behind such movements the Izaak Walton League stands firmly.”

In fact, Yeager wrote, if the Izaak Walton League had existed 100 years ago, the carrier pigeon wouldn’t be extinct and the buffalo would not be only a circus curiosity. 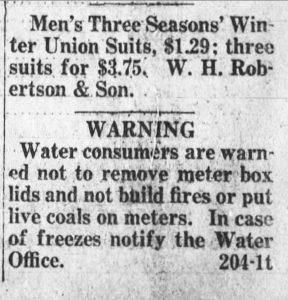 The meeting was going to be held in Danville in three weeks. Members were planning to invite the Kentucky governor and his staff, all members of the House of Representatives and Senate, officers of the Fish, Game and Park Commission, the governor of Wisconsin and Herbert Hoover or Missouri Senator James Reed.

Members of the visiting chapters were expected to pay for their own lodging, but the local group was asking for the public’s assistance for donations to provide transportation for the government officials from Frankfort to visit Dix Dam, Kennedy and Chenault bridges and have a banquet in their honor.

Yeager wrote that having so many government officials in Danville for the convention would be a great opportunity for the town to show how legislation would enable the city to improve. Yeager wrote, “Not a foot of paved street touches” KSD campus and they never would without special legislation. He went on to say that much of Danville would be forever hindered in its improvement if the streets weren’t paved.

He also said by hosting the convention, the city may have an opportunity to secure a fish hatchery which would in turn make Herrington Lake become “the greatest attraction east of the Rockies.” Yeager added, “Mammoth Cave Park will someday be a reality and second to it will be Herrington Lake.”

Yeager invited not only every member, but also every public-minded citizen to attend a meeting to discuss the final plans for the convention.