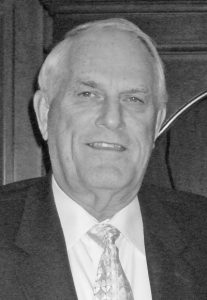 Jack C. Wallace, 83, passed away on December 28, 2018. Husband of 61 years to Carolyn Cooper Wallace. He was the son of the late Theola Jane Mayfield Wallace and John William Wallace. He was preceded in death by a son, Michael C. Wallace; a brother, Billy Joe Wallace; and a sister, Wilma Wallace Jackson.

Jack was born on December 27, 1935 in Quinton, Ky., grew up in Danville, Ky., and resided in Versailles, Ky., for 49 years. He graduated from Danville High School and earned a B.S. degree from Eastern Kentucky University. He was a veteran of the United States Army. He retired from Aviation Construction Inc. (ACI) as a project manager. He was a long-time member of the Versailles United Methodist Church where he served as a coordinator of the ushers for many years and was a trustee. He enjoyed playing golf for several years. Jack was a woodworker, and spent many hours planning and building projects for his children and grandchildren.

Funeral services will be conducted at 2:00 p.m. on Wednesday, January 2 at Versailles United Methodist Church. Interment will follow at Rose Crest Cemetery.

In lieu of flowers, donations may be made to the Wounded Warrior Project, PO Box 758517, Topeka, KS, 66675. Condolences may be left online at www.BlackburnandWard.com