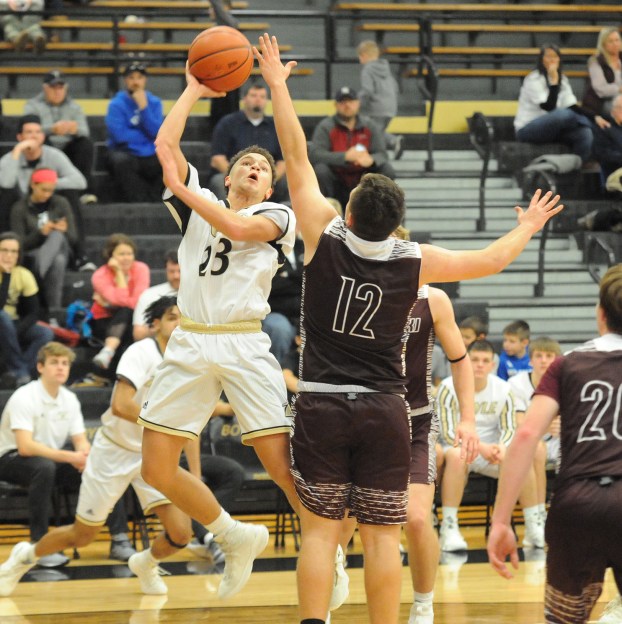 Change is coming to the Boyle County boys basketball team’s starting lineup.
After Wednesday’s game against Pulaski County, head coach Steve Adams said that his team needs a spark at the beginning of games.

The Rebels lost 51-40 to the Maroons after falling behind 17-3 in the first quarter.

Single-digit scoring has been common in one quarter per game this season for the Rebels: Wednesday’s contest was the fourth-straight game where Boyle scored in single digits in the first or second quarter.

“It’s usually the first quarter,” Adams said. “We can’t continue to dig into a hole like that. Obviously we’re starting the wrong people. We can’t go out and take care of the ball.”

The Rebels had six turnovers in the first half against Pulaski and hit just 5-of-18 shots (27.8 percent) over the first 16 minutes of the game. Pulaski’s 28-14 halftime lead was thanks to a 12-for-24 performance from the field.

Adams said the offense isn’t working as efficiently as it needs to be, in part because players are trying to play outside of their means when they have the ball.
“We talked about it for the last three days about being disciplined,” Adams said. “We’re putting people in places that they can be successful. Get your butt there, quit doing what you can’t do. And they don’t want to figure that out, so they can sit and watch. We’ve got to have people in there who want to start the game, come out and fight and get after it.”

The Rebels showed fight after the first quarter: Boyle and Pulaski tied 11-11 in quarter two, Boyle outscored the visitors 12-10 in the third quarter and 14-13 in the fourth quarter.

But the Maroons did enough to keep Boyle out of reach, and Boyle’s second-half shooting (9-of-24) didn’t do enough to close the gap.

But Adams was happy with the way his bench played on Wednesday.

“They came out and didn’t hold the basketball, didn’t try to dribble it through three people, got after it on the defensive end and just played, just competed,” he said. “If you want to be cute, be pretty, you can be cute and be pretty on the bench.”

Jacob Lassiter and Cameron Britton each came off of the bench to grab a team-high five rebounds.

KJ Combs scored a game-high 20 points for Pulaski County, while Grant Oaks scored 12 points and pulled down 13 rebounds for the visitors.

Boyle’s next game will have postseason implications: The Rebels travel to 45th District foe Garrard County for a doubleheader on Friday. Girls start at 6 p.m. and the boys game will follow.