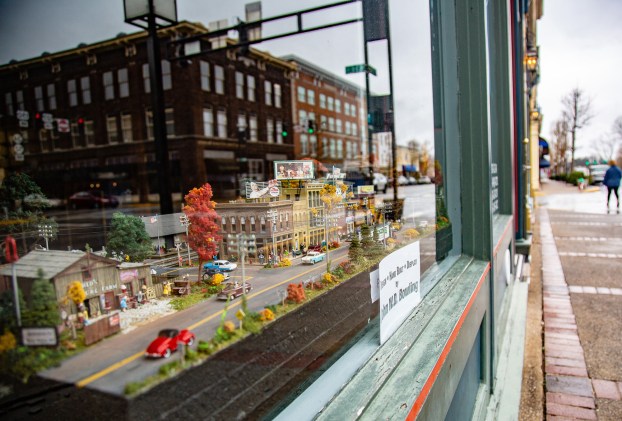 Ben Kleppinger/ben.kleppinger@amnews.com The Hub building is reflected in the window of the old Cue on Main building, where one of John Bowling's dioramas is on display.

The large dioramas depict rural Kentucky life in the 1930s through the 1950s, when steam engines were being phased out for diesel and train depots were a big part of life in many small towns.

They were created by former Danville mayor and state representative John W.D. Bowling as a kind of Christmas gift, a nice treat for downtown visitors during the holiday season. 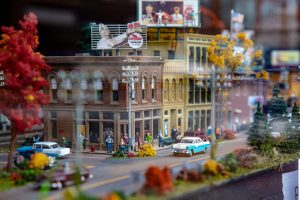 “The key to modeling is you make it as interesting as possible and as real as possible,” said Bowling, an avid model train layout builder with decades of experience.

The dioramas are on display in the front windows of Coldwell Banker, Hilliard Lyons and the old Cue on Main building, all located along Main Street between Third and Fourth streets.

While the large layouts are impressive in their own right, an even grander display sits inside Bowling’s “train building” at his home on Maple Avenue.

Bowling’s personal layout stretches the length of the building; it features 120 buildings, mostly situated inside three different cities; 1,600 figurines of people engaging in all aspects of mid-20th-century life; more than 4,000 trees, most of which were handcrafted by Bowling; and three main powered train lines crossing bridges and winding their way through knobs like you might find in southern Boyle County.

Everything is done at 1:87 scale and it took him seven years to get it to where it’s at right now.

It’s raining outside as Bowling stands inside the building that houses his layout and workshop. As he powers up the layout and explains how the digital control system and its four miles of wiring work, his eyes sparkle.

“You never finish a layout,” he says. “You always are tweaking on it or adding different scenery, or adding automobiles …”

Bowling has many tricks up his sleeves when it comes to his model train layouts — this current one is his seventh and he says likely final massive undertaking. He uses small tree roots turned upside down to create dead trees, for example. Logs in a logging truck are actually tiny twigs cut exactly right and stacked using tweezers. Billboards along one rail line are painted as political signs, asking the tiny world’s train-riders to vote for his granddaughters. One of the trains chugging along is an exact replica of a train he would ride as a small child with his mom when they traveled to Louisville.

“I just get down here and I get started and I don’t think about time,” he says. “I just get engrossed in what I’m doing. It’s a fun hobby and it’s a rewarding hobby. I come down here and the rest of the world could go by and I’d never know it.”

Bowling, whose work has been featured in Model Railroader magazine, says he got the idea to put his smaller dioramas downtown at a model train show in Madison, Tennessee, when someone asked him if he had ever displayed his work in public. He hadn’t.

“So I went to a couple (downtown businesses) and asked, and they said sure,” he says.

Bowling has already gotten numerous requests from other downtown merchants for dioramas, but he doesn’t have anymore available at the moment.

Asked if his dioramas could become a downtown tradition every Christmas season, Bowling responds, “Maybe so. Maybe we could do that. I’d kind of like to do that.”

Ben Kleppinger/ben.kleppinger@amnews.com John Bowling uses a controller to start up one of the three main tracks that circle his home model train layout.

Ben Kleppinger/ben.kleppinger@amnews.com The Boyle County Courthouse is reflected in the Hilliard Lyons window where one of John Bowling’s dioramas sits on display.

Ben Kleppinger/ben.kleppinger@amnews.com The cities inside John Bowling’s home model train layout feature fully lighted buildings and streets that can come to life when the main lights are turned off.

Ben Kleppinger/ben.kleppinger@amnews.com Inside John Bowling’s train house, his layout sprawls across the room. On the far wall is his inventory and workshop.

Ben Kleppinger/ben.kleppinger@amnews.com John Bowling’s model train layout is backdropped on one whole side by a painting of Pineville mountains that covers the entire wall. Bowling hired an artist to paint the wall after he sketched it with pencil years ago.

Ben Kleppinger/ben.kleppinger@amnews.com The city of Dant has its own water tower in Bowling’s model train layout.

Ben Kleppinger/ben.kleppinger@amnews.com The Boyle County Courthouse is reflected in the Hilliard Lyons window where one of John Bowling’s dioramas sits on display.
You Might Like

Boyle County can’t provide adequate health care for its inmates. It might take a new jail to change that.

On Dec. 20, Brian Snyder spent the night sleeping on the floor at the Boyle County Detention Center, the same... read more