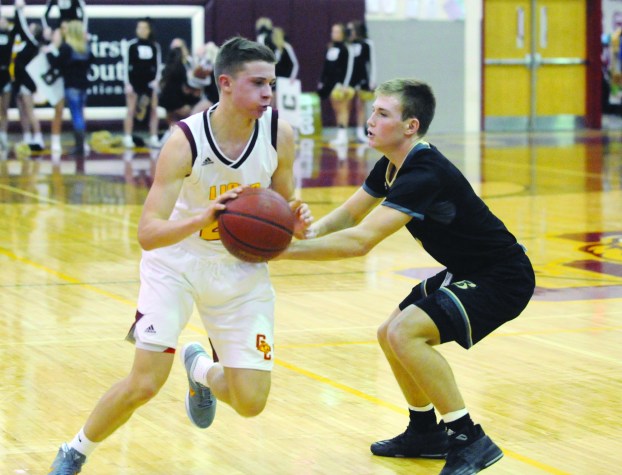 The first half of Garrard County’s basketball season has been up and down.

The Golden Lions are 5-7 and 2-3 in region play so far this year. Now, district play has arrived for a team eager to make its mark.

“We’ve been very inconsistent, this has probably been my worst defensive team I’ve had but my best offensive team,” head coach Ryan Young said. “We’re playing a lot of younger guys, we’re playing three or four guys who haven’t had much varsity experience. So it’s taking us a little longer to get them where we need to go.”

Young is in his third season as head coach at Garrard County, going 9-23 in his first year and 12-19 last season. His team finished last year strong, winning seven of its last 10 games.

January, however, has not been kind to Garrard: In the past two years, the Golden Lions have just four wins in the month of January, and are 1-7 in district games in that period.

“This is a big stretch, the next four for us are district games and it starts (Friday) night,” Young said. “Obviously we’ve got a lot of history with them, they knocked us out of the district tournament last year. It’s always a passionate, emotional game when we hook it up. I have a lot of respect for their coaching staff, I really expect an intense, physical basketball game.”

Junior Brayden Sebastian will certainly play a major role in any kind of noise Garrard makes this season. He’s among the top 15 scorers in the state, averaging 25.4 points per game.

“I definitely want to set the tone for my team and really get a winning tradition back in Garrard County,” Sebastian said. “Leading up to my senior year I really want to get Garrard County on the map.”

He’s taken on more point guard duties this season for Garrard, but that hasn’t stopped him from leading his team with 10.5 rebounds per game (among the top 25 state leaders).

It’ll take a team effort to take down Boyle on Friday, Sebastian said.

“First and foremost, we want to set the tone,” Sebastian said. “We want to show that we won’t back down, if they come out with a run on us, we’ve just got to respond and play our game. Be who we are.”

It’s a battle between two teams who have struggled at the beginning of the season but are two teams with the talent to make noise in a wide-open region.

“I think they’re dealing with some of the issues we’re dealing with, they lost a lot of quality players last year and they’ve dealt with some issues like we’ve dealt with some issues early on this season,” Young said. “When I watch them on tape, they still play hard. They just have some young guys, it might take them a little while. But I don’t think they’ll come in and lay down, I expect them to be physical with us, play us aggressively and I expect an intense basketball game tonight.”

Garrard’s starting center, Charles Jones, is one of just three players on the team with significant varsity experience. He was injured for two and a half weeks and missed four games, returning Wednesday against Montgomery County. He scored 21 points and had nine rebounds in the loss.

Jones, Sebastian and Brice Burkhart are the upperclassmen who have seen significant varsity minutes in years past. Senior Brock Milburn and sophomore Ethan Wall have filled in the other two starting spots for the Golden Lions.

“Brice, he’s going to get it going. We’re waiting on it, we’re hoping for it,” Young said. “He’s a great shooter, he’s just not making shots right now. I expect him to get off of that schneid very quickly. With Charles, it’s just a matter of getting your conditioning back. When you miss two and a half weeks, it’s hard to get that back, games are different than just running on the sidelines.”

With Sebastian’s role as a ballhandler expanding this season, Young has worked with him more on being a floor general. Young’s career as a point guard helps with that relationship, the coach said.

“Brayden’s statistics, what he’s done so far has been incredible to watch from a coaching perspective,” Young said. “But the things a lot of people don’t see is the work that he put in during the offseason to make him the type of player that he is. He’s a quiet kid, so leadership is something that we’ve had to develop and grow at the point guard spot, which I think is good for him that I played that position, I’m able to instruct him in a way, lead him down that path.”

For the Golden Lions to make it to the 12th Region tournament, it’ll take a focused defensive effort and a strong approach on offense. Sebastian said that, if that happens, they can make noise.

“I feel like our defense, when we come out and we’re aggressive on defense, our offense flows into itself. That’s what really gets us going,” he said. “I feel like as a whole, if we can lock down defensively, get our offense going, we’ll be in good shape. (Coach Young) has told us the 12th Region is wide open and I agree with that 100 percent. It’s anybody’s game, anybody’s time. We’ve just been really working and we’ve got to keep setting the tone. If we start pulling together as a team, I think we’ve got a good shot.”

By LARRY VAUGHT Contributing Writer The first time I saw Craig Yeast touch the football in a game for Harrodsburg,... read more