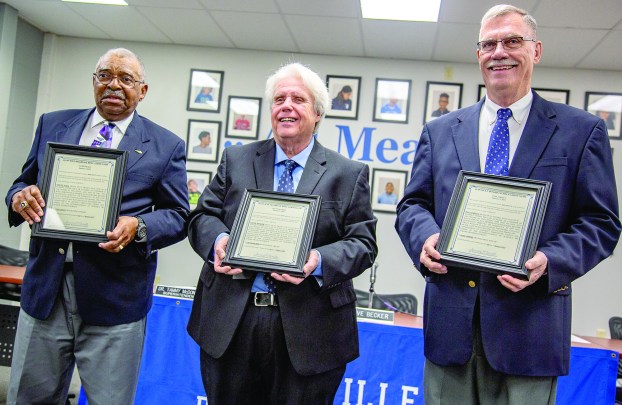 Shortly after the brief ceremony, led by state Rep. Daniel Elliott (R-Danville), the new board held its first meeting and Becker was elected as chair of the board.

Smiley and Ball made the respective motion and second to nominate Becker as chair; the vote was unanimous in favor.

Becker, Smiley and Ball were elected in the November general election in what wound up being the closest race in Boyle County: Ball earned the third and final seat up for election by a single vote over the next candidate, Aaron Etherington.

The other two board members, Finke and McCowan, were both elected in 2016 and are halfway through their first terms. A new chair and vice chair were chosen because the previous chair and vice chair, Paige Matthews and Susan Matherly, did not seek re-election.

Ben Kleppinger/ben.kleppinger@amnews.com Paul Smiley signs his oath of office after the swearing in ceremony.

Ben Kleppinger/ben.kleppinger@amnews.com Steve Becker leads his first meeting as chair after being elected unanimously by the board.

A 55-year-old Danville man was arrested early Thursday morning after another man was found with multiple stab wounds inside a... read more