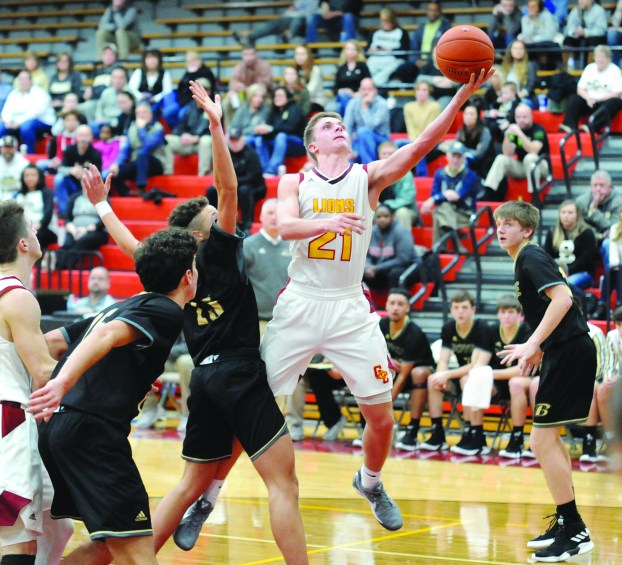 LANCASTER — Another hurdle has been cleared for Garrard County basketball.

The Golden Lions survived against Boyle County in the first district game of the season for both teams, winning 51-49 behind 26 points from Brayden Sebastian.

It’s the first win for Garrard over Boyle since head coach Ryan Young took over in 2015.

“The past two years and some change in this district, we’ve lost some really gut-wrenching games similar to this one, where we crumbled late,” Young said. “I was really pleased to have guys step up and make plays late.”

Garrard led by seven points at halftime, 30-23, and led by as many as nine points early in the third quarter.

Boyle would double its efforts to stopping Sebastian — literally — in the third quarter, limiting his touches by putting two players on the junior at every opportunity.

That defensive change, plus an early third-quarter foul on Garrard center Charles Jones, sparked a Rebel rally. Boyle cut the Garrard lead to one point by the end of the third quarter.

“We started using each other, moving the basketball and doing what we needed to do,” Boyle head coach Steve Adams said. “It was a whole lot different than Wednesday. We’re getting better, we’re so young. There’s going to be games that are up and down. But we did a nice job, gave ourselves a chance at the end. Again, it just comes back to finishing some layups, free throws at the end of the game.”

The Rebels created opportunity through defense in the second half, but still struggled putting the ball in the basket. Boyle finished the second half 8-of-39 from the field. The Rebels were 8-of-22 in the first half.

“I thought we did fine, we just went on a stretch there where we didn’t make layups or free throws,” Adams said. “We do that, we probably win the game by eight or 10. We just didn’t finish plays.”

Boyle also finished 12-of-19 from the foul line.

Sebastian went 13-for-13 and led Garrard’s 20-for-23 performance from the charity stripe, but only two of his makes were in the second half. Adams said his team’s gameplan on Sebastian was simple.

“Try not to let him get the ball as much as possible,” Adams said. “But the referees bailed him out a lot I thought, we were standing there with our hands up. But he’s a nice player, give him credit. We made him earn every basket he got. He did a great job.”

It was Sebastian’s teammates stepping up in the fourth quarter that impressed Young.

“Trevor Holman, he hasn’t played any varsity games but he stepped up and made two free throws,” Young said. “And these games are going to be like this, they’re going to be tough. I knew they were going to come in and be physical, they were. I thought we were in spurts. We’re just lucky to get out and survive it.”

Garrard received a big boost from Jones in the fourth quarter, returning with three fouls. He scored seven of his 11 points in the final eight minutes to help his team keep the lead.

“We talked with him at halftime about being smart and having to wall up, then in the third quarter he jumps and fouls a kid,” Young said. “I brought him off and I just looked at him and said, ‘son, give me the best eight minutes you’ve ever given me.’ From my viewpoint, that was some of the best basketball I’ve seen him play. I was just proud of him and his effort there late.”

Boyle had an opportunity to win the game with 3.1 seconds left, but a half-court heave from Caleb Jackson hit the back of the rim.

“I really wish I saved that last timeout so we could set up a play, that’s on me,” Adams said. “I’m not sure if we would’ve got a better shot. But the kids played their hearts out, and if the kids continue to do that, we’ll be fine. We’ve got to finish plays, but we laid it on the line. I’m proud of them. It’s still early, we’ve got a big one on Tuesday. So we’ve got to regroup and come back and play another one.”

Garrard held their timeouts for the second half, something that Young said was a focus going in. When the Rebels doubled Sebastian, he and his coaches drew up plays to break Boyle’s press.

“I think we did a good job as a staff holding on to our timeouts, that’s something that we talked about going in, we didn’t want to burn a lot early, even if they made a couple runs,” Young said. “Just because we know with our basketball IQ, we’ve got to draw different things up. We drew up three or four different press-breakers that we’ve never practiced. I think that helped us get him the ball and get us back into our offense. “

Sebastian scored eight points in the second half. He and Jones were the only two Golden Lions in double figures.

“Brayden is just a great kid,” Young said. “It wasn’t pretty tonight, I thought he forced some things, and that’s something we’ve been talking about as far as being a point guard. Knowing when to go, knowing when to pull it out. I think he was forcing it a little bit. But we’ve got to ride him, and that’s plain and simple. He plays about every minute of every competitive game we have and the kid is just a warrior. He doesn’t show it emotionally but he’ll fight you. He wanted this one pretty bad.”

With the win over Boyle, Young has victories over every team in the 45th District. He’s the first coach since Lee DeForest (2007-09) to win games over Boyle, Danville and Lincoln County.

“For us, for this program, for this community, when I took this thing over, one of my goals was to beat every team in the district,” Young said. “And we’ve done that now, they were the last hurdle in that. I just want people to know that you can stay here in Garrard County, you can play basketball here and be successful and can compete.”

The first half of Garrard County’s basketball season has been up and down. The Golden Lions are 5-7 and 2-3... read more