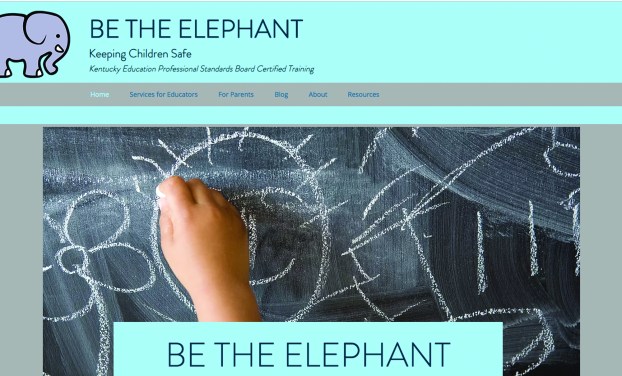 Screenshot of bethelephant.net A screenshot of the website for the program “Be the Elephant,” developed by Elaine Wilson-Reddy to combat sexual abuse inside the schools.

Elaine Wilson-Reddy didn’t realize she’d been victimized criminally until she began law school. She was a non-traditional student, having over a decade of teaching experience and executive-level positions at nonprofits behind her.

“I was 50 years old the first time I told anyone, because that’s when I realized what really happened,” Wilson-Reddy says about the sexual abuse she endured from a teacher.

Now the chief advocate of Be the Elephant, her aim is to help adults get the training they need in educational settings to prevent children from being victimized — and make sure the entire community is aware of the warning signs.

“The first thing I wrote about on my Be the Elephant website blog was about the beginning of my journey of being a survivor,” Wilson-Reddy says.

What she thought had been an “illicit affair” with her band director in school was actually sexual abuse. “I was 13 years old when he began to groom me, and 14 when he perpetrated the first time.”

The abuse continued through junior high and high school, until she graduated and moved away to go to college. 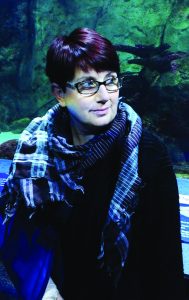 Photo contributed
Elaine Wilson-Reddy has begun a service for educators and parents, called Be the Elephant, which offers training on how to recognize the signs of abuse within the school system.

Wilson-Reddy calls educator sexual misconduct “the elephant in the room” because she says there is so much denial surrounding it. She mentions research showing some surprising results — one in specific that found only 11 percent of educators said they would report a peer if they suspected abuse or an inappropriate relationship.

She also wanted to name her new venture “Be the Elephant” to represent how elephants in the wild work together to keep their young ones safe.

“The idea of offering this training came around to me about this time last year,” she says. She taught for 16 years, worked for nonprofits for 10, then went to law school.

By now in life, she assumed she’d be a lawyer. “When that part didn’t work out, I started thinking, ‘What is it I’m supposed to do with this knowledge in my brain?’ I’ve always loved to teach. How can I use teaching and my other knowledge? And it evolved into this.”

The curriculum focused on with Be the Elephant is certified by the Kentucky Education Professional Standards Board, to provide training at the school levels to educators.

“There’s too much illegal activity going on in schools,” Wilson-Reddy says, and lists off recent news stories, locally and nationally. She says educators do take child abuse training, but it’s for recognizing the signs of abuse happening outside of the school — not inside. Her training focuses on recognizing behaviors also in peers of educators — a coach, a teacher, a volunteer, a bus driver, anyone associated with the school system who has contact with children, she says.

With her own story — Wilson-Reddy says she knew the situation with her teacher was inappropriate. “But I didn’t know it was illegal. I kept thinking of it as a relationship or an affair. I didn’t have a name for it.”

She sought out a counselor in law school, which led to her finding “an amazing therapist that I saw regularly for about a year and a half.” She said through much work, she was able to fully understand what happened to her and process it.

“I always thought I was partly responsible, never considered myself being a victim.”

When she had time to put it all together, she says of course it was healing, but it also gave her an incredible insight, paired with her educational and legal background.

Wilson-Reddy has “moved from being a victim to being a survivor — it’s a big transition. If I can get out there and talk to people within the education community, and help them recognize the balance they can create, and the warning signs from children who are being groomed, maybe we can stop some of this behavior.”

Her curriculum is not intimidating, she says. She follows a syllabus she created, and offers half-day and full-day trainings, which provide up to six hours of professional development credit.

Wilson-Reddy educates the educators about the laws that protect children, and what the consequences are if someone breaks them.

For instance, when she speaks about “grooming,” she explains perpetrators use this process to gain not only the trust of the victim, but the adults around them. And the ones perpetrating are not only men — “It is definitely men and women.”

The grooming can involve special treatment that’s substantially differently from how other students are treated; frequent after-school meetings, where no other adult is present; and the beginning of inappropriate comments about the student’s appearance, etc.

“There are some big signs — that’s the thing. It can also be so gray. Because these things, some of them, can also be done with a teacher who’s not abusing and not aiming at that,” Wilson-Reddy says. She says her training is also to let teachers know they may not even realize they’re crossing a line with certain behaviors.

“It’s to give educators the tools they need to keep students safe, No. 1. But No. 2, if there’s someone in the system who is handling themself inappropriately, but not for any other reason than maybe they don’t know any better, this gives them information to keep themselves safe and change that. And No. 3, if there is a perpetrator in the system, they will be on notice that this behavior is not acceptable, and the culture of this school system means you’re going to get caught.”

Wilson-Reddy also provides free training to parents to teach them about patterns of child sexual abusers, how to talk to children about the sensitive subject and the steps to take if abuse is suspected.

“A lot of people don’t want to come forward because they’re afraid they’re going to ruin someone’s life if it turns out not to be true.” She says following protocol set up in the school system is the best way to avoid that, by first contacting the supervisor of the person who is in question, and the chain of command can investigate. She says with social media and electronic devices, if something is going on, there is almost always a trail.

When someone toils over suspicion in these cases, Wilson-Reddy says she has three things that come to mind immediately: “Be brave. Trust your instinct. Say something.”

STAFF REPORT advocate@amnews.com The Boyle County Health Department urges anyone who ate at Burger King recently to get a hepatitis... read more