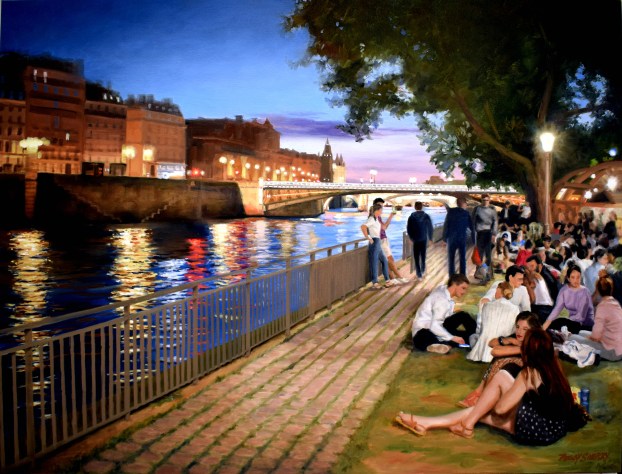 Images contributed “An Evening in Paris” by Peggy Sherry.

For Community Arts Center Creative Director Brandon Long, the magic of the holidays continues well past Dec. 25, with the arrival of artwork for the New Year New Art exhibit. “It’s always exciting to unwrap the pieces for this show,” says Long. “It’s like opening up a present because you never know exactly what it’s going to be.”

The exhibit is open now through Feb. 20. Friday evening, the community will have the opportunity to take in the NYNA exhibit during its opening reception and speak to the artists.

The mystery of the show stems from the parameters Long created when he established the NYNA exhibit in 2014. His goal was simple: Encourage artists to make new work. Therefore, the only requirement Long set was all artwork for the show must have been created recently — since August of the prior year. 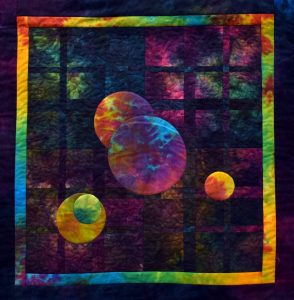 Long says, “These artists have been working hard on these new pieces and they are always eager to share their latest work. We see a lot of artists trying new techniques and subject matter in this show. With each artist submitting one piece — we get to see their freshest, most inspired ideas coming to fruition.”

The focus on “new” remains in effect with the 2019 exhibit, resulting in a vibrant array of artwork in a range of styles. Contemporary quilts and metal assemblage share wall space with impressionist paintings.

One such painting is “An Evening in Paris” by Peggy Sherry, of Somerset. Her painting captures a “magical scene” on the banks on the Ile St-Louis in Paris. Sherry says, “I have painted in the Louvre with a small group of American artists and will always have a soft spot for Paris. I’ve been interested in painting shimmering water reflections and was drawn to the colors in the water and the sparkling lights.”

For some artists, the final look of their piece isn’t always planned. Artist Andrea Perkins, of Harrodsburg, created a quilt for the show, made from two different pieces of multicolored, hand-dyed cotton fabric. Perkins cut the pieces into strips, then arranged them to create the background of her quilt. She says, “When converging strips like this, you never know what you will get so there really wasn’t a plan in place it was a wonderful surprise.”

The piece submitted by photographer Nick Lacy, of Danville, encompasses an entire year of artistic creation — 365 tiny photographs, all posted as part of a social media challenge. What began as a “7 Days … 7 Black and White Photos” challenge evolved into more than a year of daily posts of photographs he had taken. The collage in the exhibit is accompanied by a magnifying glass, allowing viewers to take a closer look at the tiny images.

Painter Kasandra McNeil, of Nancy, also sees her submission as the culmination of ongoing artistic progress. She says, “My entry is the result of a yearlong study in portrait and figurative painting. I wanted a riot of brush strokes for the girl’s hair and tulle skirt, so that her arms and face could smoothly reflect two sources of light. If you look closely, some of the undercoat peeks through in the shadows of her face and arms, which gives the subject more depth.”

The pieces in NYNA are very personal, says Long. “This show deals a lot with identity. It’s important for any artist to put themselves out there and say, ‘This me. Here’s what I’m about. Enjoy.’  Some artists work from the inside out, weighting their pieces with emotion, while others work from the outside, capturing the world around them and putting their own stamp on it.”

Carlotta Kustes, of Danville, agrees. “My work reflects my emotional state of being at the time at which it was created,” says Kustes. “It becomes an autobiography of my life. While the gallery viewer may see elements that make up a composition, those pieces conjure memories of how they were made or where they were collected to me.”

Collage artist Connie Beale, of Danville, also embraces a free-flowing process in her artwork, describing her work as “organic.” Her submission, titled “Blue Bird,” started with an image of an urn. “I simply saw it as a good container for a floral arrangement. It wanted to be more than that, so what can I say? The water with the swans appeared, the baptizers appeared, the sculpted figures walked across the landscape. It all seemed to demand a blue bird or two. Hue and balance of color is important to me. The colors have to relate tonally.”

Hunt says, “Looking back at the series up to this point, it becomes clear that the defining characteristic of my subjects are their humanity. I chose Jimmy Carter because of his goodness and generosity. These 20th-century icons are my personal heroes. In each portrait I endeavor to create a well rounded representation of the individual. When I created Carter’s portrait, I included the problems that plagued his presidency  — including the gas crisis and the Iran hostage crisis — as well as his many victories.”

The opening reception for the New Year New Art exhibit will be 5:30-7:30 p.m. Friday at the Community Arts Center. Guests will have the opportunity to talk with artists in the show and light appetizers will be provided. Beer and wine will be for sale by the glass.