The site of Dawson’s Mill on Hanging Fork in the small community of Lytle was a place for milling flour and meal, fishing and picnicking in the late 1800s and early 1900s, according to articles in The Kentucky Advocate archives.

The post office and community was named Lytle after a Lincoln County judge.

After a few tries to get a post office at the W.W. White store near Dawson’s Mill, it became a reality in December 1897, and opened in March 1898.

The first mail was distributed in April 1898. No stage route had been established and the office was only an experiment. Since there was no mail carrier, a student delivered the mail. ”Little Sadie Stagg carries the mail as she goes home from school,” was reported in the newspaper.

This place apparently was also a favorite spot to fish for anglers from Lincoln and nearby counties, who spread the word about their success in catching the most and biggest fish.

Fishing at the mill

• “A good old lady,” while fishing at Dawson’s Mill in April, went overboard into the water in April 1886. When she rose to the surface, she asked some Danville fishermen if they had any whiskey. They indicated they did.

She waded out of the water and got the “medicine” to keep off the cold. 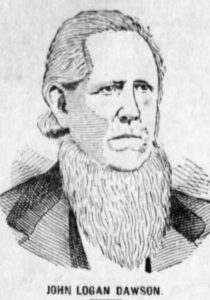 “It can safely be said the men went in the water, too, for they had been her companions while fishing on the banks of Hanging Fork daily during the summers for the last 40 or 50 years.”

• Local fisherman had been whipping the waters of Hanging Fork and Dick’s River for bass and newlights.

• Raymond Flaig of Danville had his first successful catch in October 1890 and took several large jumpers from the waters below Dawson’s Mill.

“The waters of these two streams are fine fishing grounds,” was reported.

• Ben Kelley, one of the expert fishermen of the Hanging Fork neighborhood near Dawson’s Mill, captured a three-pound black bass near the dam in July 1907.

It was the biggest catch reported in years from this noted spot, where many anglers enjoyed the sport.

• A.H. Dawson was in Danville over one weekend and talked about the oily creek in Hanging Fork near Dawson’s Mill in March 1908. He said the creek at that point was very oily and he thinks there is an oil spring in that locality.

However, the oil had not bothered the fish and he landed 14 fine ones.

A snow storm and the L&N Railroad’s need for water apparently were the only things that could keep the fishermen away from the mill pond.

All fishing ceased at Dawson’s Mill pond a few days before Christmas in 1876. The snow measured 14 inches thick and 10 inches of ice covered the fishing hole.

In November 1904 the L&N Railroad was in need of water after pumping all the water that could be had out of Hanging Fork near the railroad bridge on Stanford-Junction City Pike. So the railroad ran a pipeline from there to Dawson’s Mill and began pumping 2 miles to the railroad. The newspaper wrote that, if this continues, the mill dam, which had been a favorite fishing spot for years, soon would be pumped dry.

Students from local schools and churches also enjoyed the area as a playground.

Terah Moore took pupils of Willow Grove School fishing at the Mill Dam the day before school ended in May 1903.

The Junction City Methodist Church Sunday School hosted a picnic on July 4, 1900, at the Mill Dam.

And youths from Danville spent an enjoyable day in May 1900. The newspaper wrote, “They came home with a large string of bass with the biggest one weighing two pounds.

A 13-year-old student at Kentucky School for the Deaf lost his life in the old Dawson gristmill in March 1905. James Avery of Lebanon fell through a hole in the floor while trying to catch a bird.

Dawson’s Dam was washed away in a flood on Hanging Fork caused by heavy rains in June 1910. The owner, Mr. Lyons, planned to build a concrete dam across the creek nearby.

John Logan Dawson Sr. appears to have operated the mill in the beginning, however, research could not confirm.

He and his wife, Mary Ann Swope, daughter of Benedict and Dorcus Swope of Garrard County, were married July 19, 1832. She was born Feb. 18, 1818. They had been married more than 60 years when he died.

They are buried in the Dawson Family Cemetery on Gristmill Road between Stanford and Danville.

John was a son of Elijah Dawson (1784-1855), a native of Amherst County, Virginia, who came to Kentucky when he was 10 years old. Elijah’s mother was widowed and she and her four children moved to Garrard County.

They are buried in Buffalo Springs Cemetery in Stanford.

David Gambrel helped with information on the Dawson family and cemetery.

By JERRY SAMPSON Personal Effects Question: Help Jerry! I need some help with some of my dad’s books. I’d give... read more