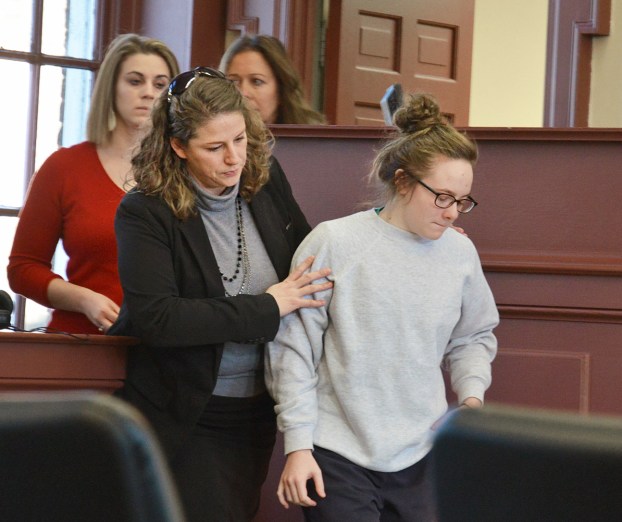 Jenna Oakley, 17, appeared in Boyle County Circuit Court Friday as her attorneys argued that her murder case should be remanded to juvenile court because the decision of the district court to have her tried as an adult was “an abuse of its discretion and an arbitrary and capricious act.”

Oakley is being charged as an adult with complicity to commit murder. The charge stems from a 2016 incident when her stepmother, Rhonda Oakley, was found dead in the basement of the family home. Oakley, who was 15 at the time, and her 20-year-old boyfriend, Kenneth Nigh, were taken into custody three days later in New Mexico, where they were found with Rhonda Oakley’s vehicle. After their arrests, Nigh later died in a hospital after attempting to hang himself in his jail cell.

In October, 2016, Oakley was indicted by a Boyle County grand jury after it was determined she would be charged as an adult.

Friday’s motion hour was scheduled to begin at 9 a.m. There was a flurry of activity in the courtroom as defense and prosecuting attorneys went back and forth, meeting behind closed doors, before court was ever called in session. Just after 10 a.m., Circuit Court Judge Darren Peckler announced to the public that the hearing had been reset for 1:30 p.m.

When court convened in the afternoon, public defense attorney Erica Roland presented a motion challenging the district court’s earlier decision, saying, “The juvenile court conducted a hearing on Oct. 13, 2016, in which the Honorable William Dotson, Judge, Boyle Juvenile Court found that two out of eight factors supported jurisdiction in the juvenile court. The juvenile court then exercised its discretion and transferred the jurisdiction to circuit court. … The transfer was invalid and the Circuit Court cannot obtain jurisdiction of the juvenile without a valid transfer.”

The motion goes on to say, “the district court abused its discretion by certifying the juvenile to be tried as an adult when it is clear the court only considered three of the eight factors required and made no factual findings regarding any of the factors.”

“The district court must consider all of the factors and said reasons for the transfer must be stated as to permit ‘meaningful review,’ or the transfer will be voided and the case remanded to juvenile court,” the motion states. “… a mere parroting of the wording of the statue does not meet the requirements of reasons for waiving jurisdiction.”

Kentucky Revised Statutes 640.010 gives eight criteria that could allow the charging of a juvenile as an adult:

The motion says that the court showed evidence of the first two criteria — seriousness of the alleged offense and that it was against a person.

However the the maturity of the child was determined by evidence only on an officer’s testimony — “There was no evidence presented by any kind of expert qualified to discuss a child’s maturity or lack thereof.”

The motion argues no evidence was presented by either the prosecution or defense regarding Oakley’s prior record or protection of the community.

The defense presented evidence that Oakley would have a good likelihood of rehabilitation, however prosecutors provided no evidence on whether rehabilitation services would help her, the motion claims.

There was no evidence presented on gang participation.

The motion argues that “Not only does the court merely parrot the language of the statue” in its order sending the case to circuit court, it also only ruled on “three of the eight factors. No finding of facts were given for how or why any of the factors weighed for or against transfer to circuit court.”

“The court failed to discuss the other five factors at all,” the motion reads. “There is no way to tell if the court determined those factors weighed for or against transfer. It is the duty of the court to consider each and every one of the factors and to make findings of fact concerning each one.”

In conclusion, the motion reads, “the defendant moves this court to hold her certification to the circuit court null and void, and remand the case back to juvenile court for resolution of her case.”

Commonwealth’s Attorney Richie Bottoms has previously told The Advocate-Messenger he couldn’t go into great detail regarding the case, but that Oakley’s situation met the criteria necessary to try her as an adult.

“The seriousness of the alleged offense? Murder. You can’t get any more serious than murder,” Bottoms said previously.

He said Jenna Oakley also met the criteria that the alleged crime was against another person; and since she’s being charged with murder, that could be important to the protection of the public.

There’s no evidence that Oakley was in a gang, and any prior record she might have cannot be released, Bottoms said.

On Friday, Bottoms told Judge Peckler that the court “did the right thing,” and that Dotson’s actions were correct when determining that Oakley should be tried as an adult in circuit court.

Last week, another of Oakley’s attorneys, Jessica Buck also appeared before Judge Peckler asking to have recordings thrown out of evidence, including a recording that contains an alleged confession.

At the end of Friday’s hearing, Peckler said he would issue his decision sometime early next week. The trial remains scheduled to begin on Jan. 23.

A Boyle County High School senior has overcome many challenges in his young life and his perseverance has paid off... read more