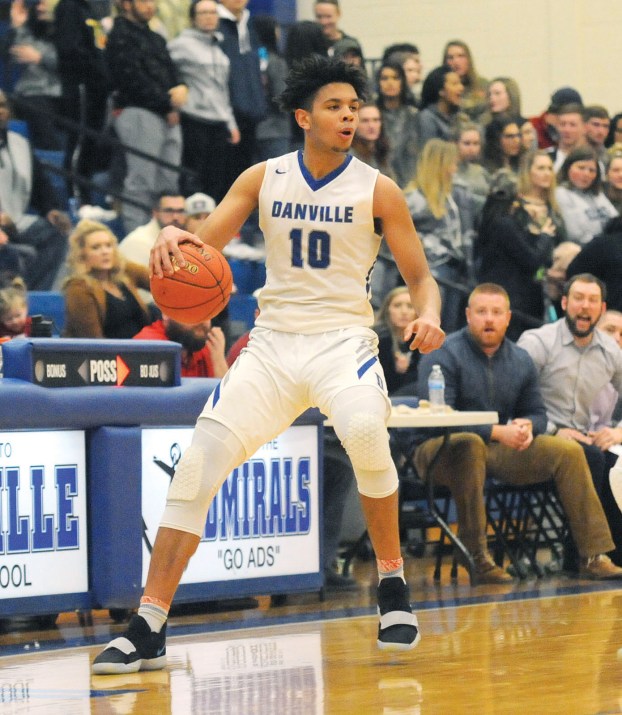 Brayden Sebastian had the performance of the night.

The Admrials’ balanced scoring pushed them past the highest-scoring performance from Garrard County this season, winning 89-82 to improve to 16-1 (2-0).

“Caden Hill, he got hurt right before the season, missed two weeks,” McKinney said. “Then he missed practice with illness. I thought he came right out tonight, we need him going. He can do some things, he’s one of the most versatile kids we got, as far as defending, putting it on the floor, shooting it. He hasn’t played a ton, I thought he played well.”

But the best performance of the night came from the visitors: Sebastian netted a stellar 44 points, the most scored by an individual against Danville this year.

“I’ve been telling people. We have people tell us that he’s not the best player in this district,” Garrard head coach Ryan Young said. “I mean, I wouldn’t trade him for anyone else. He just plays like a warrior. He’s not always the most vocal kid, but he shows up in the big moments and that’s what a great player does. That’s what he comes with.”

McKinney had nothing but praise for Sebastian. He kept the Golden Lions within reach throughout the game, scoring 21 in the first half before a 23-point second half.

“Sebastian is just a heck of a player,” McKinney said. “I really don’t know what you do with him. I thought there were a few times, we had pretty good defense on him. We were up on him with our hand up and he still buried it. I knew he was good, he played great against us last year, but he’s the real deal. He’s difficult to deal with.”

Danville pushed the tempo and Sebastian was happy with that, but the Golden Lions didn’t expect so many scorers for the Admirals.

“We knew it was going to be (up tempo),” Young said. “We didn’t expect them to shoot it collectively the way they shot it tonight. We know that Hayden and Dawson, some of those guys can make it but their other guys stepped up. That’s why they’re 16-1, they’re a quality team. But I thought we answered their runs, and I think that’s the best we’ve been offensively. That’s the way we need to play going forward.”

Young said the gameplan was to keep the Admirals off of the boards as much as possible, a challenge given the Admirals’ height and athleticism across the board.

McKinney was happy with his team’s offensive performance, but the Admirals are still learning to play defense without lockdown defender Tevin Kavanaugh.

“We’re still trying to figure out how to play without Tevin,” the coach said. “We celebrate when we hit a shot, Tevin’s back. He gives us a lot of things that our kids don’t realize. They’re seeing it. He was a big part of everything we do defensively. We’re missing him on both ends, but defensively especially. He did a lot of good things our guys don’t realize, they’ll understand that when we watch film. We’ve got to be better.”

St. Martin’s 20 points set the pace for Danville, and his past two games epitomize just the kind of team that McKinney has this season: He shot three times for seven points against Boyle County earlier in the week.

“Shaud played well. He shot the ball three times against Boyle. When we can win a game on the road when Shaud takes three shots, tonight he gets 20. That’s just how this team is, it’s going to be that way every night. The district tournament, wow. It’s going to be tough.”

STANFORD — It was perhaps the start of a new season for the Boyle County boys, while it was more... read more