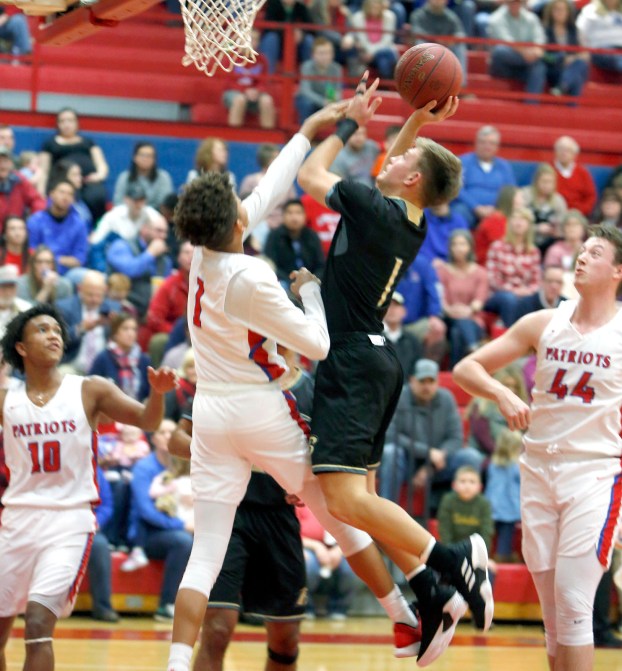 STANFORD — It was perhaps the start of a new season for the Boyle County boys, while it was more of the same for Lincoln County.

Boosted by the return of two starters who saw their first action of the season, Boyle rallied in the second half Friday night to defeat Lincoln 51-46.

Reese Smith and Grant Hotchkiss, both of whom had been out with injuries, combined provided a spark for the reeling Rebels in a battle between two teams looking for their first district win. The two did not start, but both played the majority of the game and they combined for 22 points, eight rebounds and four assists.

Given what they brought to the floor, might this game mark a new beginning for Boyle, which had lost five of its previous six games and faced a challenging early-season schedule with an inexperienced team?

“Yes and no,” Boyle coach Steve Adams said. “We’ve still got a lot of work to do, and we’ve got a long ways to go. The kids we have are good players, and they played hard, they just had no experience, and we didn’t have any experience on the floor to lead them and give them direction. And our schedule didn’t do us any favors.”

While the numbers that Hotchkiss and Smith provided were important to Boyle (5-9, 1-2 45th District), Adams said the leadership they brought back to the court was even more so.

“We had some older guys that hadn’t played a whole lot that really didn’t know what to do yet, and we were playing two or three freshmen and a sophomore, and

nobody was guiding them. That’s probably what they brought as much as anything – plus their competitive spirit and their will to win,” Adams said.

Lincoln coach Jeff Jackson cited a number of ways in which Boyle was better than his team in the second half.

Smith and Hotchkiss took the floor about 3 1/2 minutes into the game, and their impact was felt right away. They combined for their team’s first nine points as Boyle clawed out of a 7-0 hole.

Smith, who suffered a broken bone in his hand during Boyle’s football season, scored nine of his team’s last 16 points, including five during an 8-1 run midway through the third quarter that lifted the Rebels into the lead. He finished with a team-high 15 points along with three assists in 23 minutes.

Hotchkiss, who suffered a torn labrum at the start of the football season, scored all seven of his points in the first quarter. He also had six rebounds in 20 minutes.

“It’s definitely great to be back,” Hotchkiss said. “I’ve been out for five months or so, and I know Reese is glad to be back, it’s been (almost two) months for him. This team was good without us, and they’re going to be good with us, and I feel like we’re going to make a run.”

Lincoln led 34-25 before a 17-minute delay to clean numerous drops of blood on the court after Smith suffered a cut. Boyle scored eight of the next 10 points to pull within three.

The Rebels’ 8-1 run in the fourth quarter erased a 43-37 deficit, and they took their first lead since the first half when Luke Imfeld’s 3-pointer put them up 45-44 with 2:30 remaining.

The Patriots missed shot in the paint on their next two trips. Smith hit two free throws with 16 seconds left after Lincoln once more pulled within a point, and Luke Sheperson came up with a steal 10 seconds later, then hit two free throws to seal the win for the Rebels.

Sheperson had nine points and a game-high 11 rebounds, Imfeld had seven points and Caleb Jackson had five assists for Boyle, which has won three straight meetings with Lincoln after losing 11 of the previous 12. Adams said everyone on the floor – not just the two new faces – made key plays, particularly in the second half.

“We got loose balls, we got rebounds. Everybody contributed, and that’s what we’re going to have to do right now,” he said.

Hotchkiss said the new season may be a short one, but there is time for the Rebels to work on some things they need to do to be ready for the postseason a month and a half from now.

“We’ve just got to get chemistry down, work on defense and work on the flow of the offense,” he said.

It has been one historic start to the season for Danville boys basketball. The Admirals have started the season 15-1... read more