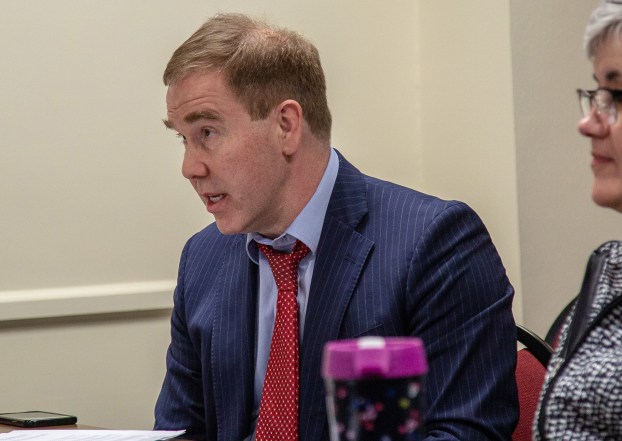 The Boyle Mercer Joint Jail Committee has recommended a “compromise” raise of 50 cents per hour for deputy jailers at the Boyle County Detention Center.

The committee voted 4-1 Friday to forward the recommendation on to the Boyle and Mercer fiscal courts for consideration.

The raises would cost around $60,000 for the remainder of the fiscal year, according to financial documentation from Boyle County Treasurer Mary Conley.

The recommendation was made despite Mercer County Attorney Ted Dean voting against it. Dean raised the same concerns about giving employees raises partway through the fiscal year that he raised during the Joint Jail Committee’s previous meeting, when the raises were tabled for further discussion.

Mercer County always sets its annual budget and then operates based on that budget for the entire fiscal year, which ends in June, Dean said.

“That’s how we do these things. We set salaries and then we typically … don’t consider (raises) in mid-stream,” he said. “I’m not saying there’s not a need there, but I would hazard a guess that my fiscal court would feel the same way.”

Boyle County Jailer Brian Wofford said he understood and agreed with setting salaries during the annual budgeting process, but a recently completed jail study has shown that the jail is “in crisis” and extraordinary action is warranted.

“We have to do something or we’re going to keep losing employees,” Wofford said.

“It’s in our backyard, it’s the same work and it pays better,” Wofford said, noting that the jail has lost two high-quality deputies to Northpoint within the past few months.

The cost of the 50-cent raises for the rest of the current fiscal year would be covered by savings already in the budget due to the jail being understaffed, Wofford said.

“The money is there. We’re not asking for new money,” he said. “… We just want to use the money that’s already there to help us get through this crisis.”

Wofford said his proposal is to give 50-cent raises to the jail staff now, then “look at adding the other amount” of 50 more cents during the budget process for fiscal year 2019-20. The proposal at the December Joint Jail Committee meeting was for a full $1-an-hour raise.

Dean said he wouldn’t be opposed to considering the full $1 raise at budget time. He also questioned how much of a “crisis” the jail is in, pointing to a smaller daily population of around 250 right now, compared to when the jail topped out at more than 400 inmates multiple times in 2017.

“We are addressing the crisis issue as best we can,” he said. “… I think from a very realistic perspective, we are a jail that is improving its circumstances.”

“We have improved,” Wofford responded. “But we still need to improve more.”

Boyle County Attorney Chris Herron said as he was driving to work the morning of the Joint Jail meeting and heard an advertisement on the radio for open positions at Northpoint.

“I don’t feel like we can afford to lose any more people working at the jail to Northpoint, because then it really becomes a crisis, in my opinion, because we are understaffed,” he said. “Yes, this is mid-year, but I think that a 50-cent raise is a compromise and I think we need to do this because I feel like we are going to lose a lot of people to Northpoint.”

Wofford said every time a deputy leaves and the jail has to hire someone new, that costs money, too — “wasted money” on training and uniforms for the employee who left, and money to train the new employee.

“By adding the salaries, guess what? That’s going to save us money,” he said. “That’s going to keep us from losing employees that we’re investing a lot of time and money in.”

Boyle County Treasurer Mary Conley, who is not a voting member of the committee, said Dean’s comments “ring true” to her as a budget hawk, but she also noted under the new cost-sharing interlocal agreement between Mercer and Boyle counties, “Boyle County is going to pay the lion’s share of the salary increase if the fiscal courts approve it.”

“I agree with your philosophy wholeheartedly because I’m kind of a stickler like you are,” Conley told Dean. “But during the budget cycle, I think we’re going to have to do something anyway.”

Wofford added, “This is not how I intend to do business for my tenure. But this is a crisis situation where we need to address it right now. Unfortunately from where we’re sitting, we need to do something now.”

Mercer County Judge-Executive Milward Dedman said Dean “speaks for me” on how Mercer County runs its budget. But, he added, “I will vote for it just because it is a crisis, just to get it to my fiscal court. I have no idea how they’ll (vote).”

Boyle County Judge-Executive Howard Hunt seconded Dedman’s thought that the committee should make the recommendation and let the counties’ fiscal courts decide whether to accept it or not.

Wofford ultimately made the motion to recommend the 50-cent increase for all jail deputies; Herron seconded. Wofford, Herron, Dedman and Hunt voted in favor; Dean voted against.

The plan for a new deputy judge-executive will be on hold until further notice, Judge-Executive Howard Hunt said. He... read more