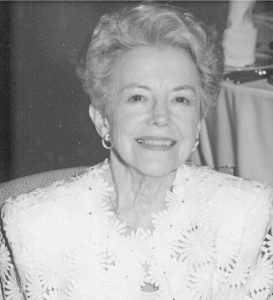 Mary Elizabeth Grant Gulley Cox Sanders, of Lancaster, Kentucky, passed away Thursday, January 10, 2019 at Ephraim McDowell Medical Center. She was born December 27, 1924, in Camp Dick Robinson in Garrard County. She was the daughter of the late Stella Hendren Gulley and Jesse Woolfolk Gulley.

She was preceded in death by her husband, Cecil Sanders, former attorney in Lancaster and by her first husband, Glen W. Cox of Lancaster; two brothers, J. Woolfolk Gulley and Charles Hendren Gulley; and one sister, Margaret G. Thorngren.

Mary Elizabeth attended the Camp Dick Robinson School and the Fugazzi Business School. She was the owner of a flower shop in Lancaster and was employed at the Garrard County Clinic for several years. Mary Elizabeth enjoyed keeping house, entertaining for beloved friends or family and decorating. Later in life she became a world traveler with her husband Cecil. Mary loved beautiful flowers and gardening. She was an active member of the Lancaster Christian Church for many years.

Funeral services will be handled by Spurlin Funeral Home with visitation and services at Lancaster Christian Church with Rev. Dr. Robert Mallory officiating. Visitation will be from 5-8 p.m. Monday at the church. Funeral service will be 11 a.m. Tuesday, January 15, 2019. Burial will follow in Lancaster Cemetery.

Memorial contributions can be made “In Memory of Mary” towards Lancaster Christian Church.

There will be a meal provided after services in the basement of the church. www.spurlinfuneralhomelancaster.com