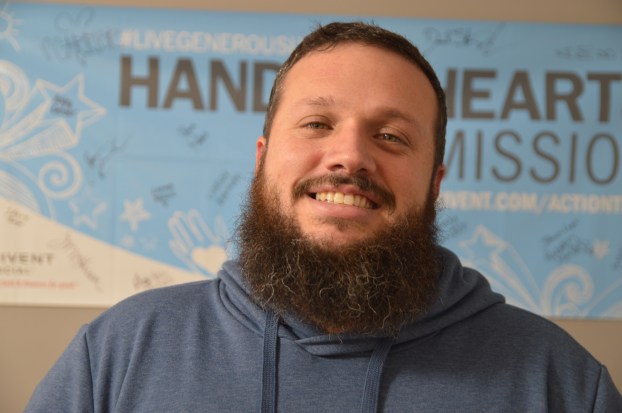 Photos by Bobbie Curd/bobbie.curd@amnews.com Fox says he’s been given a second chance at life. He feels he was put here on earth to help others achieve the same goal. “Each and every person who comes here will know they are loved, and accepted,” he says.

Addiction recovery director used to be in his clients’ shoes

The program director for Shepherd’s House in Danville says in his job, there is no “average day.” However, Roger Fox usually starts out checking the Boyle County Detention Center’s inmate list.

“I make sure none of my people are in there, and check on who needs to be here,” Fox says. Shepherd’s House is a non-residential treatment program for former inmates. Fox keeps stats on a whiteboard in his office — in two years, the program has seen 151 clients, and 48 of those have graduated.

Amber Davis, a social worker, is the case manager for the program. 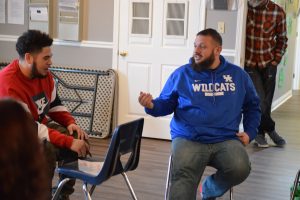 Photos by Bobbie Curd/bobbie.curd@amnews.com
Roger Fox, right, talks with clients during a group session at Shepherd’s House. As program director, Fox also functions as the peer support specialist for men.

Fox can be representing the program out in the community, sharing success stories and making contact with government agencies one day, then driving a client to court in another county the next.

“We do go to court with them, as often as we can. We want them to know they’re not alone.”

He says the program is a community-based treatment center, “but I call it a life-living program. We’re going to educate you about drugs and alcohol, sure, but we’re also going to teach you how to be a son or daughter again, a parent, how to be an employee, how to pay your bills and be self-sufficient.”

Fox tells the story of a teenage client addicted to heroin who came up missing. He got reports she was at a local dope house, so he and a coworker went and got her.

“On the drive back, she tells me she overdosed the night before and was in the ER, then when she got out she drove straight to get more drugs. So I drove her to the jail and checked her back in — that’s where she needed to be, and she’s doing well in treatment now.”

Normally, Fox says if a client is discharged from the program before graduating, they are given two hours to report back to jail. “But with her, it was critical. I had to make sure and see she got there.”

He can return clients to jail, and they can possibly be indicted for leaving the program, Fox says, but they work hard for that not to happen. “We’re not a one-and-done deal. We’re not done with you if you mess up, that’s not the way it works. This is a disease, and we have to work with them.”

His job is not an eight-hour-a-day gig. “This is our life; we’re on 24 hours,” Fox says, with 2 a.m. phone calls sometimes coming in from clients who need help because they’re about to use again. “We have to be there for them.”

The program relies strictly on donations and funding from Boyle County Fiscal Court. “We don’t get any (funding) from Danville, and that’s one of my goals — to integrate into the city partnership.”

Group sessions are held daily; everyone currently in the program is expected to show up every Monday morning. “Our community, is what we call it. Everyone checks in, we get our hands on them and see what they’re up to, what struggles they have, what do we need to focus on.”

On Monday, Fox walks into the second group session. Seven clients are in a circle, holding homework Fox asked them to be prepared with. Today’s topic is triggers.

Clients talk about not being able to watch certain shows that depict drug usage; one says his palms become sweaty when he sees it, and then the cravings begin. Another says certain music is a trigger; one guy says “outlaw women” are his. Another says the feeling of being overwhelmed and having too much to do makes her want to use.

He talks them through how to recognize these feelings and how to combat them; talks of how drugs actually rewire the brain; and asks them to share stories about how they’ve overcome their triggers in different situations.

Fox interacts with the clients easily. He gives them his undivided attention, reacting to what they say. They all seem to connect with him.

Fox says that’s because he’s been where they are.

“I like to share my story a little bit, so that people realize there’s hope,” he says. He grew up with a drug addict dad, and says he should’ve known what drugs do to a family. But it didn’t stop him.

“I tell them I used to have a big hole inside of me. Drugs and alcohol made me feel OK enough to be around people. But once it got a grip on me …”

Fox began on pain pills. He barely graduated college due to how far his addiction had progressed. Then the crackdown on opiates came, forcing the cost of a pill up to $50.

He got a divorce, was separated from his kids and came to his breaking point. He started injecting heroin, then meth. Then, he was stealing to make ends meet for his habit.

Fox went through eight or nine different treatments for addiction — his family, including his in-laws, had done all they could for him.

Then he got caught in a life-changing predicament in Lincoln County. “It was about 3 a.m., and the police roll up. Here I am in this house where they’re cooking meth.” However, at the same time, he had another case mounting up against him he didn’t even know about — he was selling pills to pay for his addiction, too, and sold to an informant.

“So me and my dad and my girlfriend got a trafficking case against us.” He got 10 years in prison. He got probation, but violated it because he couldn’t stay clean. After he broke into a house his mother owned and was squatting there, neighbors called her to report it.

“My mom came, and I told her I was at the end of my rope,” and talked of killing himself, Roger says. She called probation and parole, and he went back in. Strangely enough, he says he was happy to be there.

“I was safe from my brain. I can turn it off in there, do what I’m told.” He got out on May 1, 2015, but had nowhere to go. He’d burned all his bridges. But the Shepherd’s House in Lexington took him. It took 20 months of work — between the SAP program in prison and the Shepherd’s House — for him to get clean. He began to climb work ladders, and is so thankful for those who gave him a second chance. He managed the house in Lexington before coming to Danville.

“And here I am today, driving my daughter to school every morning. Getting to see my son. Making amends to all those I hurt,” Fox says, his eyes smiling. He tells clients often — look, it can be done. I did it. Look where I am.

“Danville is great about community support. Making these people feel like they’re part of it, instead of separate from. It changes lives.”