Allison Ball, Kentucky state treasurer, is a ninth-generation Kentuckian. Her family has been in Floyd County in Eastern Kentucky since the 1790s. She developed a deep appreciation of entrepreneurialism and small businesses when, at the age of 9, she started her first business selling pencils, and continued with the operation of a Prestonsburg law practice. 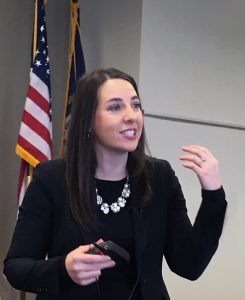 Ball holds a degree from the University Of Kentucky College Of Law and was very active while a student there, serving as president of the University of Kentucky chapter of the Federalist Society. After graduating, Ball spent four years as an assistant Floyd County attorney, prosecuting child abuse and juvenile delinquency cases. She is married to Asa James Swan. The couple has one son, Levi, whose birth in 2018 made Ball the first Kentucky constitutional officer to give birth while in office.

Elected in 2015, Ball is currently the nation’s youngest female statewide elected official. She is the 38th state treasurer of the Commonwealth of Kentucky. Prior to her role as state treasurer, Ball practiced bankruptcy law and focused on consumer rights and commercial litigation. Throughout her professional career, Ball has focused on developing and improving the economic mobility of individual Kentuckians. Since taking office, she has launched a new transparency website making it easier for Kentuckians to see how the state government is spending their money.

Unclaimed property returns have reached over $70 million in monies returned to Kentuckians over the past three years. That is the most in treasury history during a three-year period.

Ball’s reputation for getting things done continued in 2018:

• April 2018: Ball held a press conference to announce the launch of the Financial Empowerment Coalition and the Financial Empowerment Database. “As state treasurer and a former bankruptcy attorney, I know that we have a financial literacy crisis in Kentucky. The answer to fixing this crisis long-term begins in childhood. The best time to learn basic principles of saving and money management is before a person graduates from high school and enters the workforce.”

• September 2018: Ball was named the State Financial Officers Foundation’s national chair at the fall meeting in Kansas City. She is the first Kentuckian to serve as National Chair of the organization.

• Oct. 3, 2018: Ball is one of 24 elected leaders named to the 2018 Aspen Institute-Rodel Fellowships in Public Leadership program. The Rodel Fellowship program is open by invitation only to individuals between the ages of 25 and 50 serving in publicly elected office.