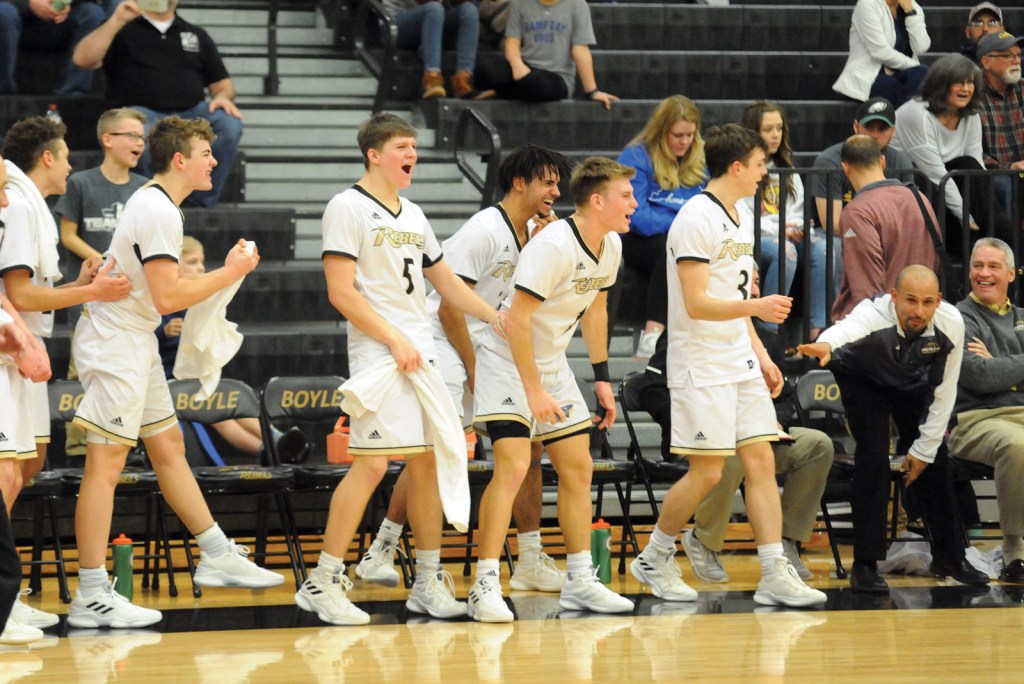 The Rebels lost in Lancaster two weeks ago by two points, but the rematch looked like two different teams.

Boyle pounded Garrard 72-47 thanks to a stat-stuffing performance from Reese Smith and an efficient 21 points from freshman Luke Imfeld.

It’s the third game this season that Boyle has had Smith and Grant Hotchkiss back from injury, and they again made a difference on both sides of the ball: Smith finished with 19 points, nine rebounds, eight steals, five assists and two blocks. Hotchkiss was in foul trouble for most of the game but scored 10 points and had three rebounds in just 12 minutes of action.

“We are still, I think, are a long way from where we can be and need to be,” Boyle head coach Steve Adams said. “We just haven’t had enough practice time together and we can’t kill them because we’ve got games. But it’s going to take us two or three weeks, we’re still committing some dumb fouls. But our effort is there and we’re getting better, we’re moving the ball so much better, getting out and going with it.”

Adams was thrilled with his team’s defensive effort and willingness to pass the ball — Boyle finished with 16 assists to 10 turnovers — and said that has him excited about where his team will be.

“They’re such an unselfish team, they’re looking for everybody and they’re playing hard,” Adams said. “But we’ve still got a lot of things we need to work on. I’m proud of their effort and the way they’ve worked here, because it’s been a tough year for them, given the circumstances, playing a tough schedule, playing young players. With Reese and Grant back, it takes a while. But the kids have been tremendous, working and talking and helping each other. I’m very proud of them.”

Adams noted senior Will Imfeld as a player who showcases that selflessness on the team.

“They’re so unselfish. Will’s a senior who has been playing well and is all of a sudden coming off of the bench, but he sees how that helps the team,” the coach said. “It also helps him because he stays out of foul trouble, he sees what’s going on and now we’re working him at two different positions. It’s making us more flexible, better and it’s making him better.”

Garrard County head coach Ryan Young wasn’t happy with how his team responded in the second quarter of Friday’s game.

The Golden Lions roared out to a 15-10 lead after one quarter of play, but Boyle punched back with a 24-point second quarter and Young said his team didn’t fight back.

“We were out-worked, out-toughed, out-physicaled,” Young said. “They just came in and kicked our tails tonight … They started to come up and get into our shorts a little bit. The book is out on us, get physical and they’ll turn the ball over.”

“Doesn’t help when your center gets called for a questionable call early in the first quarter, that kind of took us out of the way we were playing,” Young said. “We scripted early in the game to come out and get him into the paint. We did that, we didn’t capitalize on it. But he’s a big cog for us and guys just have to step up, they didn’t tonight.”

Noah Allen was the next leading scorer for Garrard with six. The Golden Lions finished 12-for-39 from the field and 1-for-14 from 3-point range.

Boyle improves to 2-2 in 45th District play while Garrard falls to 1-3. The Rebels have won two straight games in the district, Garrard has lost three straight district games.

“We’re at the soul-searching square,” Young said. “Are we going to step up and compete with these other teams? This week has been really revealing with how hard these other teams are competing in these big moments. We’re not there yet.”

Boyle girls the aggressors vs. Lions

Rachel Leath and Payton Bugg pushed the pace as Boyle County girls took care of Garrard in a 59-33 blowout.

Leath and Bugg each scored 16 points to lead all scorers in Friday’s contest.

“She’s done a really good job. Tonight she was really good as far as knowing when to pass, when to drive. She’s more aggressive with the ball which is what you expect from an eighth grader who’s trying to figure it out. I think she’s figuring it out so hopefully going forward, she’ll just keep getting better.”

The Rebels jumped out to a 16-2 lead in the first quarter and led 19-9 after eight minutes before a slow 2-for-10 second quarter.

“We had 18 shots in the first quarter,” Edwards said. “Our pace wasn’t as high as we wanted it in the second. But we came out in the second half, I thought we did a really good job offensively and defensively. Our intensity was better, especially on the defensive end.”

Boyle’s defense stepped up in the second half, allowing just 13 points in the final 16 minutes of the game.

Edwards said it was a huge positive seeing his team rebound from a loss to Collins earlier in the week without star senior Makayla Baker. Baker twisted her ankle against Collins and was out against Garrard.

“I thought overall, everyone we played, played well,” Edwards said. “We didn’t have Makayla tonight and we had to make up for that, but I thought the people coming off of the bench played really well.”