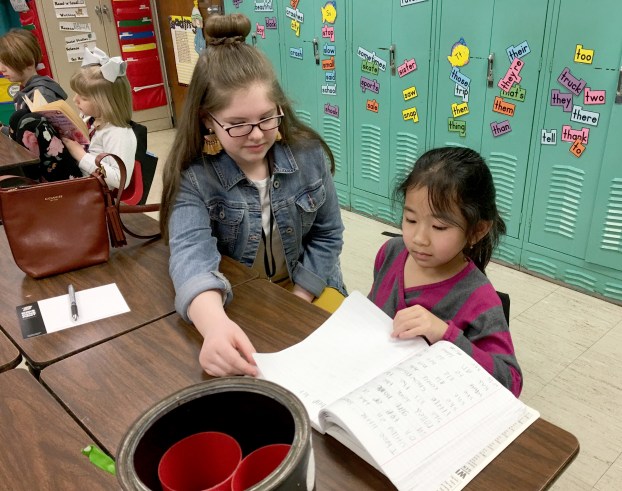 Photo contributed Boyle County sixth-grader and "superintendent for a day" Hailey Sparks looks through a notebook with a student at Woodlawn Elementary.

Boyle sixth-grader takes over as ‘superintendent for a day’

Boyle County sixth-grader Bailey Sparks is usually sitting at a student’s desk when she’s at school. But on Thursday, she had a much larger desk and bigger responsibilities: She got to be “superintendent for a day.”

“I didn’t know what the superintendent did, to be honest,” Sparks said Thursday night, after she had helped run the Boyle County Board of Education meeting and her superintendent duties were winding down. “It kind of showed me that they do have a fun job, but at the same time, they have to get work done.” 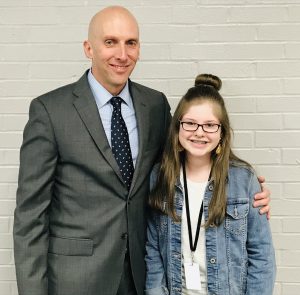 Photo contributed
Boyle Superintendent Mike LaFavers, left, and “superintendent for a day” sixth-grader Hailey Sparks pose for a photo together.

Sparks’ mom bid on and won the “superintendent for a day” prize at a Woodlawn Elementary PTO fundraiser, Sparks said. And so, instead of heading to class first thing on Jan. 17, she headed to Superintendent Mike LaFavers’ office.

She and LaFavers attended a staff meeting in the morning, where they discussed things that were happening in the different schools. Then they went to Woodlawn Elementary and observed some classes, taking notes on teachers and things they were doing well, Sparks said.

She and LaFavers also ate lunch with the district’s teachers and classified employees of the year award-winners, then attended another meeting to plan ahead for the Black and Gold academy in the summer.

LaFavers said Sparks was especially helpful with the Black and Gold Academy planning.

“I threw several ideas out there, and she was just like, ‘No,'” LaFavers said to laughter from those at the board meeting. “… To her credit, some of them were pretty bad. One of them was zombies …”

Sparks did get in some regular class time after that, but then she was back at it in the evening, guiding the school board from each agenda item to the next and presenting the teachers and employees she had eaten with earlier in the day with their awards.

“He does a good job doing his job,” Sparks said of LaFavers. “He taught me a whole lot today and I would like to thank him for all of that.”

LaFavers said Sparks did a great job, herself.

“She’s a positive person and she knows what she thinks about things … and she says them in a very diplomatic way,” he said. “That’s awesome. How are you going to stop a young person like that?”

When she’s not superintendent, Sparks is part of the Boyle County Dance Team and KUNA, the student United Nations. She said she has thought for awhile she wants to be a teacher when she grows up. But after Thursday, “I’m thinking about being a superintendent,” too.

Photo contributed The Boyle County Board of Education, sixth-grader Hailey Sparks and Superintendent Mike LaFavers stand for a photo with the district’s teachers and classified employees of the year.

Ben Kleppinger/ben.kleppinger@amnews.com Boyle Superintendent Mike LaFavers, left and sixth-grader Hailey Sparks prepare to hand out awards to the district’s teachers and classified employees of the year.
You Might Like