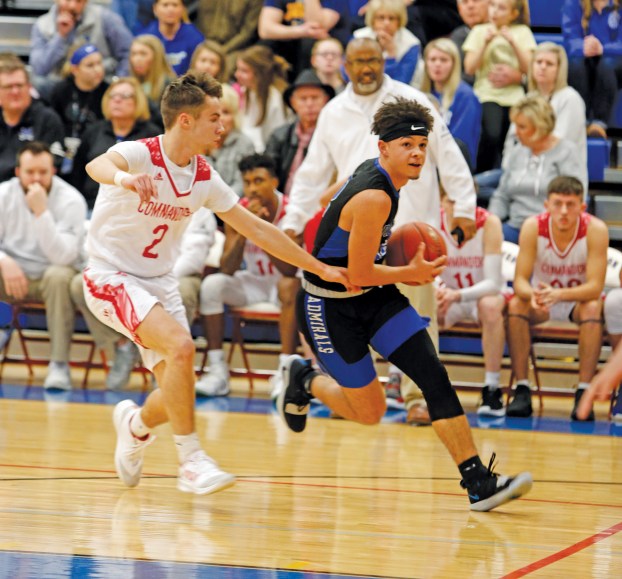 SPRINGFIELD – Danville’s basketball teams regularly appear in the All “A” Classic, but they aim to do more than make an appearance next week.

Both the Danville girls and boys earned spots in the statewide small-school tournament by winning the 12th Region All “A” Classic on Friday night, and both will be heading to Richmond next week with the goal of competing for a championship.

The two Danville teams wrapped up their respective regional titles with convincing victories over Washington County in Friday’s championship games.

The Danville girls captured their sixth straight All “A” regional title with a 79-34 rout in which four players scored in double figures.

The Danville boys got a career-high 33 points from Dante Hayden as they won 67-40 to take their fourth All “A” regional title in the past five years.

Both teams will be among the best in their respective fields in the statewide All “A” next week at Eastern Kentucky University’s McBrayer Arena, though their coaches know the road won’t be easy.

Danville coach Judie Mason, who returned to the bench after three seasons away, led the Lady Admirals to the finals in 2014 and said she thinks this team can win one more game.

“Getting there is not what I looked forward to when I came back,” Mason said. “Winning it all. We were runner-up, and I want this team to do something that team didn’t do.”

“This team, we’ve got a shot, and we could also get beat the first round. Every game there’s going to be tough, but if we do things the right way, we’ll probably be in the thick of all of our games,

Danville 79, Washington County 34 – Danville scored the first 11 points and never looked back as it surpassed 70 points for the fourth consecutive game and won by its second-largest margin of the season.

The Lady Admirals led 25-9 after a first quarter in which they hit 10 of 17 shots from the field and forced 11 turnovers.

“I felt like we were the better team, and I just wanted us at the beginning to do the little things,” Mason said. “You look on the internet and you know their scores, and I was afraid we would overlook them and we’d struggle, so I was glad we came out with intensity.”

Ivy Turner scored 11 points in that first period and finished with 20 points and eight rebounds for Danville, which has won five straight games and nine of its last 10.

“I thought it was a total team effort. Ivy gave the ball up a lot tonight and got everybody involved, so I was pretty pleased with them.

This will be Danville’s sixth straight trip to the All “A” state, but the Lady Admirals haven’t won a game there since their run to the finals in 2014, meaning none of the current players have gotten out of the first round.

“It feels good because we’ve never won the first game, so hopefully we’ll have a chance to do better,” Turner said.

Danville set an All “A” regional record by winning its 11th title, one more than Somerset. Mason led six Somerset teams to the statewide All “A” from 1998-2003, and this will be her sixth Danville team to get there.

Danville 67, Washington County 40 – Danville has been nothing if not balanced this season, but that wasn’t the case in this game as Hayden had the hot hand.

The sophomore guard made his first nine shots from the field and scored 20 points in the first half as he powered the Admirals to their 10th straight victory.

“I had a good warmup, had a good day. Tonight was just my night, I guess,” Hayden said.

Danville’s top five scorers are bunched between 8.8 and 12.8 points per game, but no other Admiral had more than eight points in this game as Hayden’s teammates deferred to him.

“We have games where we’ve got six guys in double figures, and tonight he just got a lot more touches,” McKinney said. “When he gets on a roll like that he’s going to stick it in the basket, and I thought (point guard) Zach (Thornton) did a good job getting the ball to him.”

Hayden was 9 for 10 from the field in the first half 13 for 20 overall. He also had a game-high seven rebounds.

The Admirals hit eight of nine shots in the first quarter as they opened a 15-6 lead, and they finished the first half 17 for 24.

Their lead reached 20 points at 37-17 in the final minute of the first half, and the margin stayed near 20 throughout the third quarter before Danville led by as many as 28 points in the fourth.

The Admirals will make their 10th appearance in the statewide All “A.” They have advanced beyond the first round in six of their previous nine trips, and they have their sights set on playing several games next week.

“We just have to play our game. We have to come out and play strong defense like we always do, we have long, athletic guys so we have to go to the boards, and we have to get the easy baskets,” Hayden said.

Boyle County came out motivated against Garrard County on Friday night. The Rebels lost in Lancaster two weeks ago by... read more