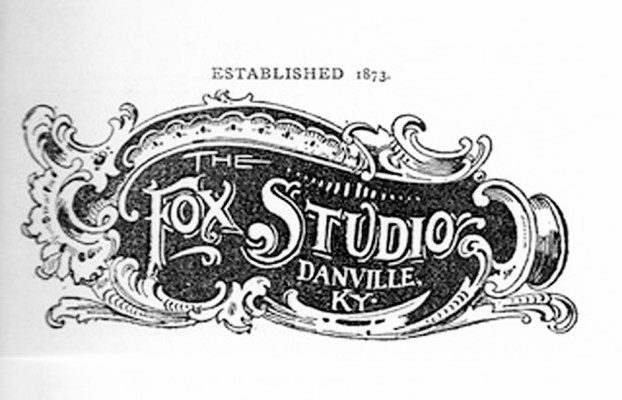 Image contributed Logo in the 1909 City Directory used by Fox on his work.

Talented photographer was an important fixture in Danville community

“He is one of the most artistic and best known photographers in this section of the county,” according to an article in The Advocate-Messenger archives.

“Mr. Fox turns out nothing but the most artistic work and with him, photography is indeed an art.”

“In 1884, he photographed all places of importance in this region to use at the World’s Fair in New Orleans, Louisiana.

“He also does all kinds of engraving and makes half tones and engravings of all kinds.” 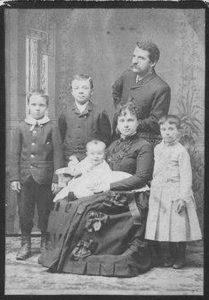 Photo owned by Karen Thomas
Edward H. Fox and his wife Margaret Amelia Head Fox are shown in about 1875 with their children, from left, Samuel, Harold, Maurice and Lyda.

The Advocate used Fox’s half tones in its publications and called them “the high grade work that he does.”

The Central Record in Lancaster also had the occasion to use “a great many cuts, and we cannot refrain from a word of praise for Edward H. Fox who does work for us.

“Mr. Fox executes for us a splendid cut that would do credit to any of the larger and more pretentious establishments to be found in the larger cities, and his prices are very reasonable.

“This class of work with Mr. Fox is but a sideline, as he is one of the leading photographers in Central Kentucky, and with it, a clever courteous, Christian gentleman.”

Fox had an exhibition in 1910 in his studio of a picture of Dr. W.C. Young which is a work of art, according to an article in The Advocate.

“It is a hand made sepia and Fox was employed three weeks in doing the work. The picture is to be hung in the Parish House of the Fourth Avenue Presbyterian Church in Louisville, of which Dr. Young was pastor before he became president of Centre College. The picture is made from a photograph taken by Klauber of Louisville while Dr. Young lived there.”

In 1911, Fox did a life-size crayon drawing of Circuit Judge Milton J. Durham taken from a large photograph and it was hung in the Pulaski County Courthouse in Somerset with those of other circuit judges there.

He also photographed many historic places in the Danville area.

“While operating a printer’s paper knife in August 1911, the well-known and popular photographer, became entangled with a machine and one of his fingers on his left hand was severed. The wound is healing nicely.

“The paper knife is one of the most treacherous of the many dangerous machines printers must use, and it is watched by an experienced man with the same care that a trainer watches a lion, but even with this many careful men meet with serious mishaps.”

While in Danville, Fox served as secretary of the South District Baptist Association. He was re-elected in 1912 and again in 1919. He was also on the advisory board of the Young Men’s Democratic Club in Boyle County. He also allowed his studio to be used for charities in town.

100 YEARS AGO — 1919 Chrisman Bros. of Boyle County, have leased from Anton Bodner, the portion of his building... read more