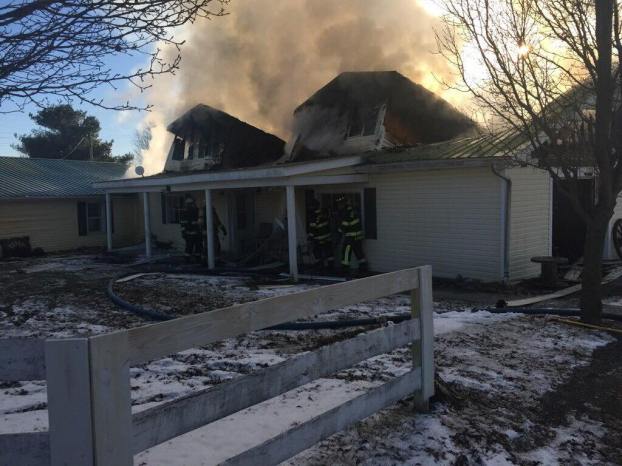 Boyle County firefighters were very busy Monday morning, dealing with two structure fires happened, one right after the other.

The first one started at about 6 a.m. on Johnson Branch Road, near the backside of Parksville Knob. According to Fire Chief Donnie Sexton, it was an attic fire and believed to be caused by the wiring in a ceiling fan.

No one was injured who lives in the home. 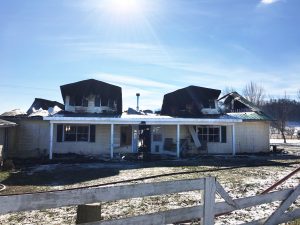 Photo courtesy of Junction City Police Department/Merle Baldwin
A fire along White Oak Road in Junction City Monday destroyed a home, but the occupants were not injured. The cause of the fire is still under investigation.

As firefighters returned to the station, the second call came in at 8:08 a.m. Sexton said fighters had just cleared the first fire and hadn’t even gotten out of their gear yet.

“So they made some really good response time,” he said.

The second fire was on White Oak Road. The residents and their pets got out of the burning house uninjured.

Traffic was detoured onto Hogue Hollow Road until the fire was extinguished.

Sexton said firefighters’ water supply was set up at a Knob Lick hydrant, two miles away from the fire location. He said when there’s no nearby water supply, such as a pond, teams set up a fill station at the nearest hydrant.

Sexton said there were two men on the hydrant, so one tanker could roll up to refill while the other was being used on the blaze.

“They did a really good job on both fires,” Sexton said, especially when it was six or seven degrees out. “We were very fortunate. Nobody was hurt, just a little cold.”

The cause of the White Oak Road fire is yet to be determined.

A Boyle County teenager’s poem describing her childhood memory of her grandmother’s battle with cancer has won first place in... read more