The American National University building on East Lexington Avenue in Danville will be bought by the Danville Independent School District for $820,000 if the sale is approved by the Kentucky Department of Education. (Photo by Ben Kleppinger)

The Danville Independent School District plans to purchase the American National University building next to Danville High School for $820,000. If the purchase is approved by the Kentucky Department of Education, the building could serve as the district’s central office and alternative school.

The Board of Education voted unanimously to enter into a purchase option on the building at the end of an hour-long executive session Tuesday night.

“We’ve been working on this as a district since July, so this is not something we’ve taken lightly at all,” board Chair Steve Becker said before the vote was taken. “It is, in my opinion, the opportunity of a lifetime for our district.” 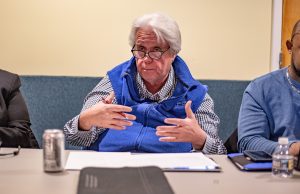 The district will be able to use around $300,000 in restricted funds on the purchase, and a little more than half a million will be spent out of the general fund. “I feel very comfortable that this is going to be something we can easily manage,” Becker said after the meeting.

Superintendent Tammy McDonald confirmed the building purchase means the district is no longer planning to use the former Jennie Rogers Elementary building for its central office and alternative school. “We are exploring all options for the use of Jennie Rogers at this time,” she said.

“There’s no preconceived notion. We know community folks are going to say, ‘That means you’re going to dispose of Jennie Rogers.’ That’s not even in the conversation,” Becker said. “The building is still vital to the school district.”

McDonald said American National University has many other locations. She did not know if the Danville campus would be relocating, but confirmed the existing location is closing.

The building was listed for sale by Schrader Commercial Properties at $1.495 million, according to a property fact sheet provided to the school board members. It is a 10,700-square-foot building sitting on 2.36 acres.

“The building has been very well maintained inside, as well as the grounds around it, and offers plenty of parking along the side and back of the building,” according to the property fact sheet. “This is definitely a gem in the heart of Danville.”

McDonald said the district plans on relocating its central office to the building before the beginning of the 2019-20 school year. The alternative programs currently at Danville High School and Bate Middle School will be relocated to the building beginning with the 2019-20 school year, in order to provide better resources and services for the district’s most at-risk kids, she said.

The job of a dog groomer can sometimes be compared to that of a beautician, but it can be a... read more