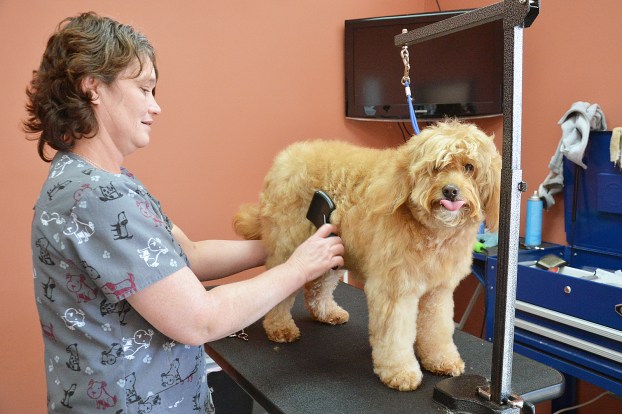 Photos by Robin Hart Renay Hundley, co-owner of Uppity Puppy in Danville, brushes out Josie's cout one day this week before giving her a trim.

The job of a dog groomer can sometimes be compared to that of a beautician, but it can be a bit more challenging at times. Both professions use combs, brushes, clippers, scissors, shampoo and hair dryers. But dog groomers have the added challenge of getting an animal in and out of a kennel, coaxing it into a bath, trying to stay dry when the dog shakes off water, and lifting it onto a grooming table.

Then there are the wiggles, tail wags, face licks and sometimes shivering and barking that dog groomers deal with every day.

Renay Hundley of Danville and Adine Bouchard of Harrodsburg have worked together at their business, Uppity Puppy, for nearly five years. 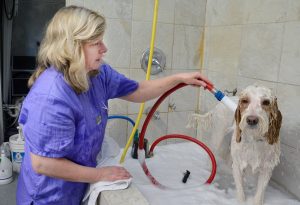 Photos by Robin Hart
Adine Bourchard rinses off Porter. She said groomers can’t do finish work on the dogs until they’re clean.

Both women agreed that their favorite part of dog grooming is “making them look good,” Renay said.

“You give them some style. Sometimes you can be creative and artistic,” Adine said.

But it’s very important to understand the dog’s owner’s preference too, they said.

For example, one of Renay’s clients prefers her dog to have “clean feet,” meaning that the fur around the feet is to be trimmed very short, even though it’s not the typical style for that breed of dog. But Renay said she understands the request: It helps keep the dog from tracking in so much dirt and grass.

While Adine carefully used scissors to trim the long fur from around a little dog’s eyes and snout, she said, “You can’t tell them to turn their head this way or that way. They have a mind of their own.”

And they have to be careful with every dog. “You are working with sharp instruments,” Adine said.

Every dog has its own personality the two groomers said. Recently, as Adine was trimming a shivering, shy little dog, she said the dog’s sister was the opposite — when she’s being groomed, the sister wants to greet everyone in the room.

Both women said they work on a lot of rescue dogs, not just pure breeds. “You never know what they’ve been through,” Renay said. So the dogs need to have consistency and learn to trust the groomer, she added.

Over the years, the women have worked on many dogs whose names fit them perfectly — Casper looks like a ghost; Wookie looks like a Wookie from Star Wars.

On an average day, the groomers take care of four to six dogs each, depending on the dog’s size and length of fur. Usually the dog is there for two to three hours, they said. There is “prep work,” where matted knots and tangles have to be taken off; then a bath, drying time, trimming, cleaning ears and nail trims are all part of the routine.

By the end of the long day, Adine and Renay say they are usually exhausted. “We’re pretty much on our feet the whole day until we leave,” Renay said.

Photos by Robin Hart Porter doesn’t appear to be happy about bathtime at Uppity Puppy.

Photos by Robin Hart Adine Bouchard sweeps up hair from her work station before bringing in another dog for grooming.

Photos by Robin Hart Between groooming one dog and waiting for another to dry before giving it a trim, Adine Bouchard checks the phone for messages.

Photos by Robin Hart Adine Bouchard, co-owner of Uppity Puppy in Danvlle, brushes out Wookie before giving her a trim.
You Might Like

A community service center established by the Housing Authority of Danville is now open for individuals and families living in... read more