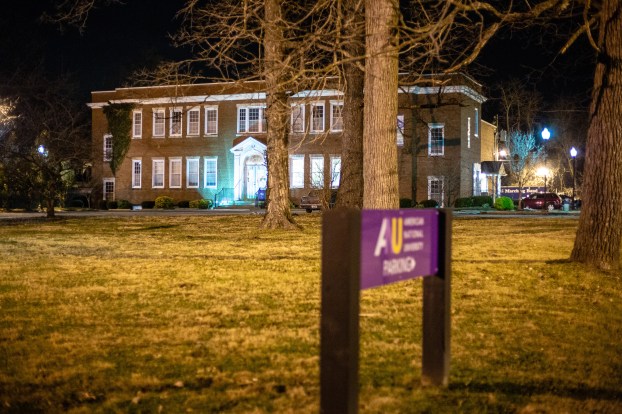 When Danville Independent School District acquires the current American National University building on Lexington Avenue later this year, the school district will get the whole kit and caboodle.

For $820,000, the district is getting the 10,700-square-foot building, the 2.36 acres it sits on, all of the existing furniture, all of the technology such as classroom projectors and even curriculum materials, such as ANU’s health science skeletons and models.

“It’s pretty much move-in ready,” Superintendent Tammy McDonald said. “… We would literally bring students in today and use this facility. It’s amazing.”

The Danville Board of Education voted Tuesday night to enter into an option to buy the ANU building pending approval from the Kentucky Department of Education.

“This building was not something that we sought out,” McDonald said. “It became available, so it became an opportunity for us.”

Shelton said the board did not make the decision lightly or without all the information — the board has been holding lengthy executive sessions to discuss possible property acquisition for months.

Newly elected board members Paul Smiley and Glenn Ball were also brought up to speed before they were asked to vote, she added.

“The week after they were sworn in, I gave them a complete update with a timeline and synopsis of every conversation the board had had,” she said. 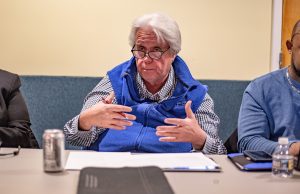 Ben Kleppinger/ben.kleppinger@amnews.com
Danville school board Chair Steve Becker leads Tuesday night’s board meeting, at which the board voted to enter into an option to purchase the American National University building adjacent to Danville High School for $820,000.

The district had planned on moving its central office and alternative school classes to the former Jennie Rogers Elementary School building on East Main Street. Jennie Rogers is being used to house Hogsett Primary School this year, while Hogsett in south Danville is being renovated.

• The district will be able to consolidate its alternative school classes from the middle- and high-school levels in a single area away from other students, and use classrooms already outfitted with chairs, desks and technology like projectors.

• The front section of the building will house the district’s central office, with enough additional space to relocate some staff with district-wide responsibilities from their current offices in specific schools.

• The ANU building and the curriculum materials that come with it can help the district expand its career pathway offerings, particularly in the area of health science, and students at the high school can easily walk to the adjacent ANU building for any classes.

• A rear basement area will provide the district with valuable storage space for records.

• The parking lot behind the ANU building will allow the district to park all of its buses on-site, next to its garage, and could provide space in the future for a new bus maintenance facility.

• A room in the front basement area will give bus drivers a better office space in which to complete paperwork and do training.

• There will be at least three conference-room-style spaces that can be used for staff training and school board meetings.

“This building solves so many problems within the district,” McDonald said. “… I’m not finding a negative at this point.”

The district expects to spend between $75,000 and $100,000 on minor upgrades and changes to the building. Most of that cost will involve running fiber internet from Danville High School to the ANU building, McDonald said.

By running fiber itself, the district stands to save money in the long run because it won’t have to pay a monthly fee to an internet service provider, she added.

“All of our current students will be fine to continue their programs,” Sutton said. “There’s no worry about that whatsoever.” 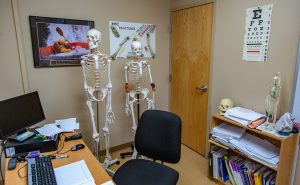 ANU has three other campuses in Kentucky — in Lexington, Louisville and Pikeville.

McDonald said currently, there may be anywhere from one to six students at the middle-school level and six to 12 at the high-school level who cannot attend normal classes and need alternative curriculum, away from the rest of the district’s students. Currently, the alternative students have designated classroom spaces at Bate Middle School and Danville High School.

Moving both alternative programs to the ANU building will benefit those students greatly, she said.

“Having them in this facility would allow us to provide more services for those students, not just academically, but to meet other needs,” she said. “Students in alternative school are some of our most at-risk students and we do need to think about providing them more services to help them get back on track. … I think I’m the most excited about being able to have the alternative school there so we can provide increased services to those students.”

McDonald said the district is on “borrowed time” in its current central office location, in a building owned by the state on the campus of the Kentucky School for the Deaf.

“That building has been surplussed by the state, so at this time there is very little maintenance or repairs that are done to that building,” she said.

The heating in the building is unreliable and there have been multiple issues with flooding when it rains, she said.

The plan had been to move the central office to the Jennie Rogers building. Now that the plan has changed, McDonald said the district is “exploring all the options for the use of Jennie Rogers.”

“We definitely will as we’re exploring these options for Jennie Rogers, will keep the building open for community use,” she said. “… I really do think of it as an opportunity for our school district. Not only is it that natural fit, but that (ANU) building really helps us preserve expansion and growth within our system, because it opens Jennie Rogers back up to being a facility possibly for students.”

Asked what kind of facility that might be, McDonald said she couldn’t get into more detail. “We’re exploring all options.”

Board of Education Chair Steve Becker said he hopes taxpayers see that purchasing the building will be good for the district in the long run.

“(Paul) Dean is a very conservative finance officer and I’m a very fiscal conservative anyway,” he said. “… I just want the taxpayers to be assured that we’re not going to be sorry we’re doing this.”

Becker pointed to the close proximity to Danville High School and the minimal renovation costs as two reasons the decision makes sense for the district.

“In my mind, (I’ve always thought) we have this building sitting next door to us that’s been used for educational purposes since way back,” he said, referencing the building’s history as part of the Kentucky College for Women. “And I never could imagine why we had never acquired the building. We have that opportunity now; our enrollment has been growing. So we need this space. And we’re going to be able to utilize it wisely. So I’m excited.”

Ben Kleppinger/ben.kleppinger@amnews.com American National University’s library would become the home for most Danville Board of Education meetings.

Ben Kleppinger/ben.kleppinger@amnews.com Health dummies and medical equipment are among the curriculum materials the Danville school district would acquire.

Ben Kleppinger/ben.kleppinger@amnews.com Danville Superintendent Tammy McDonald, right, speaks during Tuesday night’s board meeting, while board member Glenn Ball looks over documents on a laptop.
You Might Like

An increase in burglaries, thefts and drug arrests were reported on page A1 on this day, 20 years ago in... read more