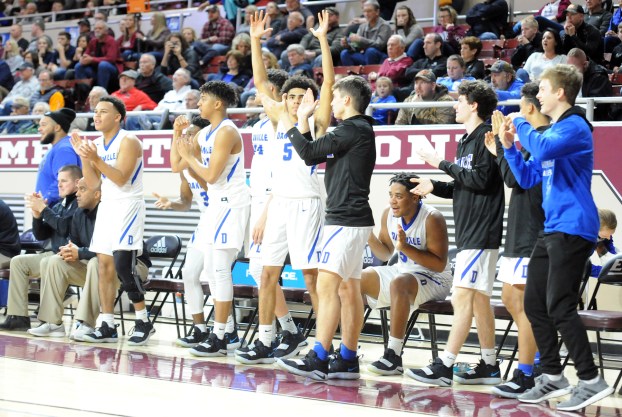 Danville defense stifles No. 1 scoring offense in All-A first round

RICHMOND — Danville did it all in the second half to win its first-round matchup in the All-A state tournament.

The Admirals came back from a slow first half to dominate the second, beating Elliott County 64-49 in the round of 16 at EKU’s McBrayer Arena.

“Zach hits a big shot so we’re going into the locker room with a bunch of momentum,” sophomore Dante Hayden said. “When we got to the locker room, we just talked about making easy shots, I think we missed like eight or nine layups in the first half. We just came in, talked about that and playing harder on defense, get our intensity up so we can have a better half.”

The Admirals had a better percentage from beyond the arc (4-for-11, 36 percent) than overall shooting (9-for-29, 31 percent) in the first half. That was the premise of head coach Ed McKinney’s halftime talk: Hit the easy ones and keep doing what you’re doing on defense.

“They’ve got a hell of a team, have been in the bright lights,” McKinney said of Elliott County. “That program has been really good for a long time. They’re pretty used to this. My halftime talk was, we’re down three to a good team and we’ve missed a lot of easy ones around the basket … I just thought, if we just get settled down, not get so panicky on the little ones, we’re going to be OK. That’s what I tried to tell them … inside, I’m still stressed over it, but I’m trying to sell them on the fact that we’re going to be fine if we make some easy ones.”

Danville responded in the second half, scoring 20 points in the third quarter to take a 43-37 lead into the final frame. The Admirals’ defense continued to limit one of the best teams in the 16th Region to limited shots on the other end.

Elliott County (16-3) had scored more than 90 points in a game eight times this season, and the Lions led the state in scoring entering Thursday’s contest (82.3 points per game). Senior guard Korbin Spencer entered the game second in the state with 31.1 points per game.

But Spencer and Elliott County were limited by the Admirals’ defense all game, and were shut down in the second half as Danville alternated between a stifling man-to-man defense and a lengthy 3-2 zone.

“We knew it was going to be a challenging game for us, Elliott County was a great team,” Thornton said. “We just had to execute on everything, on defense we had to lock everybody down. We had to make the easy ones.”

Danville locked in on defense while the offense started to click in the second half: Danville finished 14-of-23 from the field in the final 16 minutes.

“You’ve got to play well to win these, your B- game isn’t going to win these games,” McKinney said. “Our second half was as good as we’ve been. Hit shots, hit free throws. Played pretty good defense, rebounded, picked up loose balls, drew charges, blocked. We did everything in the second half, and it takes that to beat them.”

Thornton played a key role, taking a majority of the point guard duties while defending Spencer on the other end. Thornton finished with 21 points, 10 rebounds, six steals and five assists, all of which led the game.

“Obviously Zach’s shot at the end of the half was big for momentum,” McKinney said. “He played really well, made the right pass, stuck it in the basket. He made a lot of good plays late, too, making the right pass to the roll guy.”

Elliott County started the game hot — the Tigers shot 5-for-11 from three-point range in the first half — but Danville did well to attack shooters in the final two quarters. Elliott finished 8-of-16 from beyond the arc and 17-of-45 from the field.

Rebounding was the biggest difference: Danville totaled 42, including 15 on the offensive end, to Elliott County’s 20.

McKinney said Elliott County had a tough game Tuesday at Morgan County — a district game that the Tigers won by three — and said that might’ve contributed to tired legs in the second half.

“I went and scouted them Tuesday night in Morgan County, and that was an intense game,” he said. “It’s a district seed game. I think, they played at 7:30 on Tuesday night then they’ve got to practice and get down here. That wasn’t good for them, that’s unfortunate that they’ve got that game. They looked like they had played in two games in 48 hours, and that Morgan County game was a three-point game. It was a battle.That probably took a little bit out of them, which I guess worked out well for us.”

Hayden said the team has been focused in on the defensive side of the ball.

“Defense, we’ve always had a defensive mind, we’re a better defensive team than we are offensive. It sometimes doesn’t look like that, but we really are a defensive team. We just wanted to really lock down when it came to crunch time. Once we do that, I feel like the offense really opens up because we get fast break layups and stuff. That’s the way we want to play defense and get easy ones.”

The Admirals will play Shelby Valley (19-3) next, winners against Clinton County in an overtime contest on Thursday night. Tipoff is scheduled for 8 p.m. Friday.

“We just want to try to win this all right here,” Thornton said. “It’s going to be challenging because there’s a lot of good teams in it, but I think we’re up there with them.”

“We’re not coming up here to stay just one night, we’re coming up to win the thing,” he said. “Me being a sophomore, I want to win this one for my six seniors, come out and play my hardest for them.”