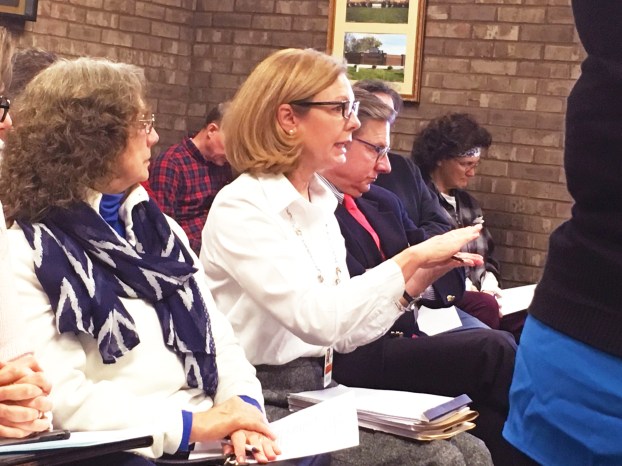 The advanced manufacturing center project at Bluegrass Community & Technical College in Danville could be fully funded by Monday night, if the city commission follows the Boyle County Fiscal Court’s lead in contributing an additional $78,000.

The fiscal court ultimately voted to contribute half of that gap — $78,000 — after getting assurance from Tipton she would be making the same ask of Danville City Commission at its meeting Monday.

BCTC was one of 110 applications that received funds through the Kentucky Work Ready Skills Initiative. Tipton said they originally asked for $4.8 million.

“The state came back and said we want to fund you … They have given us $2.736 million, which we can’t pull down until we raise the required community match, which is $1 million,” Tipton told the court Tuesday.

The Kentucky Work Ready initiative has awarded $100 million in statewide bonds to 40 applicants through the program, which was created to help modernize workforces to meet the needs of employers and promote sustainable incomes for Kentuckians.

The statewide bonds were awarded during two rounds of competition in 2016 and 2017, and included all regions of Kentucky.

Tipton said the $78,000 she was asking the court for can be funded over the next two years, and lined out several different selling points.

“This will allow us to construct a training environment that stimulates what our manufacturers look like,” she said.

Students who participate in the program will be learning about and training for their profession in an environment that looks like what they will see in an actual workplace, she said.

The center will allow the school to double the amount of graduates coming out of its industrial maintenance, advanced manufacturing and electrical technology programs. The addition will be about 15,000 square feet with four new classrooms and four lab areas, which will allow them to double the number of students from 12 to 24 in the labs at one time.

BCTC is funding $1.1 million and change toward the endeavor, as well. As of last Friday, Tipton said the school “had a generous donation from Inter-County Energy in the amount of $40,000. My intention was to ask for a little more (from the city and county), but I’m happy to say I’m asking for a little less.”

Magistrate Phil Sammons inquired if Tipton would be asking Danville for the same amount. Tipton said she is on the city’s agenda for Monday night to do just that.

Sammons told Judge-Executive Howard Hunt, “I think that’s one of the best projects this county can ever have.”

“I think it’s essential to the workforce development of the whole county, for any industry that’s coming in …” Hunt added.

Magistrate Jason Cullen asked if Treasurer Mary Conley could be brought in on the discussion to “find out where the money is, and how you feel about it.”

Conley said the center is an amazing project for the community. She said the court must approve a transfer of budgetary funds to the existing line item to accommodate the request.

Hunt said he imagined “they can be flexible on what we can do and when we can do it.”

“But until everybody gives their fair share, they can’t draw any of this money down from the state,” Conley said, who was seated in the audience beside Danville Mayor Mike Perros.

“You didn’t really look at the mayor just now when you said that ‘fair share,’ did you?” Hunt said, to an eruption of laughter.

Tipton clarified if the school has the commitment in the form of a pledge, it should be able to get to the state funding.

Conley told the court the “budget looks good,” and the county is right where it was projected to be, but reminded magistrates they will need to talk about where the revenue is as it relates to expenses. She said if the court was serious about shoring up expenses, “we’ll have to look at consolidation of services is a good start.” Right now, she said, expenses exceed the county’s revenue.

“We have a substantial surplus to rely on that will sustain the fiscal court for some years to come,” Conley said, but added that large projects can consume that.

“That’s business that we need to do on a usual, normal basis,” Hunt said.

Conley responded, “But I just have to say that, though.”

Tipton said graduates from the school’s degree program are “contributing members, tax-paying members of our society.” She said an economic impact study was done a couple of years back with all 16 colleges in the state’s community and technical college system.

“For every dollar invested in BCTC, the return on investment is $4.90. I know I’m asking for a chunk of money here, but I think you’ll see the addition of the center will help with some of the things you all are discussing,” Tipton said.

Magistrate Jason Cullen said there was no doubt about the benefits; magistrates were being conscious of what they’re spending.

It was noted the Danville-Boyle County Economic Development Partnership recently added a $10,000 contribution to the project.

Magistrate Tom Ellis asked Tipton, “Among your graduates, are they finding jobs, whether it’s here or outside the community? And do you have any data about them retaining jobs in the community?”

“Our students have no difficulty finding jobs. Quite frankly, we can’t produce our graduates quickly enough to meet the demands. That’s why we need it,” Tipton said. As far as whether they stay in the community, Tipton said she had no hard data on that.

“But we know that Danville has a large manufacturing base,” she said. She pointed out that BCTC serves a region — it has students from Mercer, Garrard, Lincoln, Casey, Washington and Marion counties — but the largest part of enrollment comes from Boyle.

“But those individuals are coming here to Danville to take classes, they’re probably buying gas here, eating, could be shopping here. And they could be looking for jobs here,” Tipton said.

Tipton said an architect has been hired with the funds the school has already raised, and handed out renderings she said are “not for public knowledge,” but she wanted the court to get a sense of what it will look like.

A Lexington-based development company gained initial approval this week from the Danville-Boyle County Planning and Zoning Commission to pursue a... read more