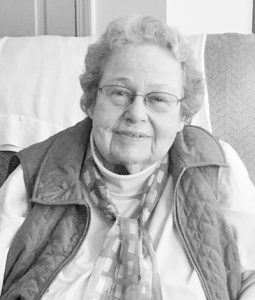 Betty Davis Watts, age 91, of Harrodsburg, widow of the late William Wayne Watts, went to be with our Lord on January 17, 2019 at the Ephraim McDowell Regional Medical Center in Danville.

Born on April 13, 1927, in Paint Lick, Ky., she was the daughter of the late Richard Jones and Theessa Clara Woods Davis. Betty spent her childhood near Herrington Lake where her parents operated several fishing camps including Gwinn Island. She was a graduate of Danville High School and attended the University of Kentucky. She was secretary for the Mercer County Farm Bureau for over 20 years, secretary for the Mercer County Fire Protection Association (formerly the Mercer County Fire Department) and a member of the Ladies Fire Auxiliary. Fire protection became a passion for both her and her late husband as they traveled the state promoting fire protection. She enjoyed spending time with her family, watching sports and playing bridge. She was a member and former Sunday School Teacher at the Harrodsburg Baptist Church. She spent her last years residing at McDowell Place in Danville where she renewed friendships, made new friends and enjoyed interacting with a very caring staff.

Other than her parents and husband she was preceded in death by a grandson, Michael Sanders.