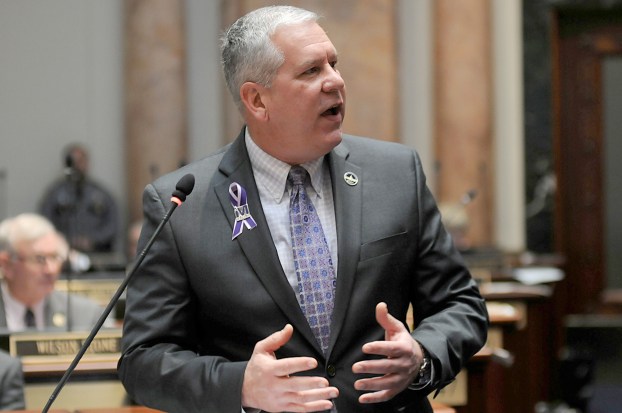 LRC Public Information Kentucky Rep. John Blanton (R-Salyersville) speaks on the House floor during last year's general session. Blanton is sponsoring House Bill 94 this year, which would reform the use of financial bail in the state.

A bill before the Kentucky legislature this year could help end the use of money bail as the main way defendants are held in jail pretrial. It could also serve as an important stepping stone toward more comprehensive criminal justice reform, according to experts from a broad spectrum of political viewpoints.

While the bill would take away some authority to require defendants to pay money to get out of jail, it also gives judges new authority to detain any defendants they determine represent “a danger to the public if released.”

Such defendants not given the option of leaving jail would be granted a “detention hearing,” at which they could attempt to prove they would not represent a danger.

The bill was drafted with substantial input from the Pegasus Institute, a non-partisan think tank that aims to “provide public policy research and solutions that help improve the lives of all Kentuckians.”

Joshua Crawford, director of criminal justice policy for Pegasus, said bail reform became a top legislative priority of the think tank last year, after it completed research on the issue in 2017.

“Perhaps no area of the criminal justice system is more in need of reform than pretrial release and detention,” Crawford said. “Here in Kentucky, like many places all over the country, pretrial release and detention is often determined not by charged offense or criminal history, but a defendant’s ability to pay. This means that poor defendants often sit in jail awaiting trial, while those with money do not.”

Pegasus’ research revealed that in 2016, there were 64,123 non-violent, non-sexual defendants held in Kentucky jails only because they could not afford their bonds. At the same time, there were at least 43 high-risk, violent or sexual offenders who got out of jail because they had enough money to pay for their bail.

“Any defendant — such as drug dealers or gang members — with access to a few thousand dollars can buy their freedom,” Crawford said.

Boyle and Mercer counties have previously led the state in requiring financial bail for pretrial defendants. The two counties had the lowest rates of non-financial bonds in the state from 2012 through 2017, according to a pair of reports from the Administrative Office of the Courts. A recent criminal justice and jail study commissioned by the two counties found that from 2010 to 2017, only 4 percent of Boyle County defendants and 3 percent of Mercer County defendants were able to leave jail without paying money.

Statewide, non-financial bonds were given 39 percent of the time in 2017, according to the AOC.

House Bill 94 would “reduce, but not eliminate, the use of money bonds” in Kentucky, Crawford said.

“The ability to impose a monetary bond on a defendant can be a useful tool in ensuring a defendant shows back up for court,” he said. “Where money bail becomes a problem is when it’s used for the purpose of detention, or results by default in detention. HB 94 seeks to eliminate that reality. Judges may still use the tool of monetary bonds to ensure appearance, but it must be an amount a defendant can afford.”

The detention hearing process would be “an entirely new process for Kentucky judges, but not a new process overall,” Crawford said.

“States all over the country, as well as the federal courts, utilize detention or ‘dangerousness’ hearings to determine who should and should not be held in jail while awaiting trial,” he said. “In practice however, Kentucky judges already detain a great number of defendants pretrial by imposing unaffordable bonds. This process will rightly change the focal point of detention (to) offense and offender, and away from ability to pay.”

House Bill 94 requires judges to use a validated pretrial risk assessment tool. That’s something Kentucky is already using and the results are provided to judges.

Judges would be required to document reasons why a defendant is being held for a detention hearing. All detention hearings would have to occur within five days. The hearings would allow judges to determine if there are any combination of conditions that could be imposed to “reasonably ensure” the defendant would show back up for their next court date and would not threaten the safety of the public while released.

Judges would be allowed to consider the type and severity of the offense a defendant is charged with; “the history and characteristics of the defendant” including their mental condition and drug-use history; and whether the defendant was on probation or parole when the new offense was allegedly committed.

The defendant would have a right to an attorney at the detention hearing and be allowed to testify.

Results of the detention hearing would include:

The decision reached during the detention hearing could be reviewed and changed later if new information with a “material bearing” on the case is discovered or if the defendant fails to comply with conditions of release.

“It’s something that’s long overdue and there’s been a lot of conversation about bail reform in Kentucky. But nobody seems to be willing to take the bull by the horns, so to speak,” Blanton said.

Blanton’s bill hasn’t gotten a lot of attention yet, but it was discussed on KET’s Kentucky Tonight last week, when four public policy experts from differing political backgrounds all agreed House Bill 94 is something they want to see passed into law.

“We believe that when it comes to both families and kids specifically, the justice system has to be addressed. Some of those issues, such as bail reform, are pertinent to adults …” said Terry Brooks, executive director of Kentucky Youth Advocates.

Kentucky leads the nation in the number of children with incarcerated parents, Brooks told Kentucky Tonight host Renee Shaw. “Think about the cost to child welfare when those kids are put into care,” he said.

“Let’s get a win,” he said. “Let’s let that build momentum for other arenas of consensus.”

Ashli Watts, senior vice president of public affairs for the Kentucky Chamber of Commerce, said her organization is behind House Bill 94 because of the impact to business and the economy when people are held in jail and cannot go to their jobs.

Watts said she believes House Bill 94 is “probably the criminal justice bill of the session. It’s the one I think there is the most consensus on.”

Jason Bailey, executive director for the left-leaning Kentucky Center for Economic Policy, and Anne-Tyler Morgan with the Pegasus Institute, also expressed support on the TV show.

“Criminal Justice reform continues to be a top priority, and frankly an issue that’s at a crisis level if you look at the crowding in local jails, if you look at the incarceration rates across the state,” Bailey said. “So bail reform is one of the issues that we need to do and we need to do it right and do it in a way that doesn’t allow discretion within the system so that it gets undermined and not implemented. That’s what we’ve seen some in the past.”

Blanton said overall, the response to his bill from other legislators has been “very positive.” He is trying to meet with public defenders, commonwealth’s attorneys and many other stakeholders to get their input and find out if there’s anything in the bill they have an issue with or might like changed.

One possible change on the way: The bill will likely be altered to improve pretrial investigations and give judges “better insight” on the defendants their dealing with, Blanton said.

“We went really conservative on the draft purposely, to bring some of these people to the table,” he said, noting there are others who feel the bill doesn’t go far enough.

Walking that tightrope has led to support from both sides of the aisle and high hopes that the bill could pass this session, he said. “Both are excited about the legislation and the possibilities that it brings.”

The Boyle County Farmers Market will hopefully be returning to set up shop at Constitution Square Park. The fiscal court... read more