Question: I’m having a time. I’m helping my auntie to move out of state. She’ll be closer to us and her last sister and brother. She’s excited and it’s a good thing. But she has so much stuff. Her mother back in the 1960s was big into lamps. We have boxes of old glass lamp shades. Small ones, big round globes with hand painting, petticoat shades and on and on. I think that she went to a lot of auctions. Most of them are clear but there are some colors, like red, greenish-yellow and several amber. Most are like this petticoat shade in clear glass in the photo I sent you.

Do people still buy these? What should I do with them? Thanks for taking time out to write about this.

Answer: I love old lamps and good old lamp shades. But the change in tastes and trends have not been kind to them. Back in the day, Oil lamps were actively collected and bought from stores like Gardner & Pinkston, here in Harrodsburg, as well as many other antiques dealers.

People loved to compete with other collectors to snag that one gorgeous, all-matching lamp. Dealers often paired gas shades with oil-burning stands or bases, and astral shades with brass-plated banquet lamps. Whatever was pretty and eye catching was the mode of the day. Then something happened.

People became more interested in lamps that actually cast light that they could read by, see by and not have to worry about it being accidentally broken by a thrown Frisbee. Beautiful as they are, they don’t give much light and they are hard to read by. But boy, are they impressive. Once a common household staple, shades and accompanying lamp bases, burners and chimneys could be bought at nice department stores, hardware stores and even jewelry stores across the country.

You don’t have a petticoat lamp shade. Petticoat shades are glass shades, usually in milk glass, that actually sat on the glass chimney. It kind of looked like a pseudo Chinaman’s hat. 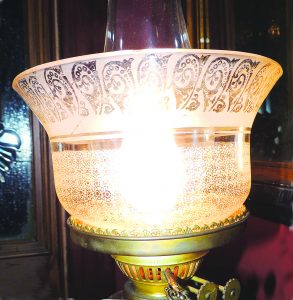 You have an etched, upturned glass shade with a 4-inch fitter. Just so you know, a fitter is the bottom that would have fit into a shade or fitter ring, it’s what attached the shade to the burner. These lamps, though often paired with oil burning fonts / lamps, were actually made for gas fixtures. They typically date from the 1890s to the early 1900s.

Let’s talk about colors. Though the ranks have lessened, there are still some collectors that covet red glass shades — be they cranberry or pigeon blood red. Red still sells today. Not for what it once did, but it does sell.

Equally popular is vaseline — that’s the greenish yellow you mentioned. Green, blue and other colors are searched out.

Amber — don’t get me started on amber glass. I don’t care how fine, rare or by what company, I have to say that amber today is one hated color. Amber glass is one hard sale.

Clear shades like yours aren’t hated but they aren’t loved either. It’s a shame too. Crystal or clear is the one color, or lack thereof, that actually allows more light to be shed and is easier to replace if broken.

Unless it’s something really special, they just don’t bring much money, even to active collectors. I’ve passed on buying dozens over the years.

Decorators have long since favored fine silk shades on old oil burning lamps for that antique touch in a home. People who re-purpose old things have tried to use clear lamp shades, flat on plates or cake stands, with small votive candles glittering inside. That’s not terribly popular or functional.

All in all, I think that a pretty shade like yours, in a retail store, would be priced for about $20. At an auction, it will likely be grouped with other similar shades, probably amber, and it will bring only a few dollars for the group. You might donate the clear or amber shades to a charity organization. Check with local antiques dealers for the colored items.

Sorry this wasn’t a happy ending on this question. I hope I was able to help some. Thank you for a great question anyway.

Talented photographer was an important fixture in Danville community