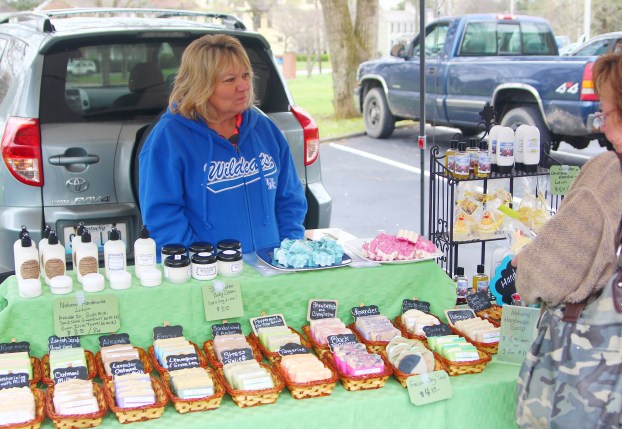 File photo by Ben Kleppinger Vontella Peak with Lancaster-based Natural Creation helps a customer at the farmers market in the Danville High School parking lot in 2017.

The Boyle County Farmers Market will hopefully be returning to set up shop at Constitution Square Park. The fiscal court voted unanimously Tuesday in favor of the idea.

Jennifer Kirchner, Convention and Visitors Bureau director, told the court she recently attended a board meeting of the farmers market.

“There was a lot of excitement about coming back to the park, and everyone sees the value and the appropriateness of being in that space,” Kirchner said. One of the topics discussed was how the area can accommodate all of the trailers, and the group decided having Second Street closed would be a benefit.

The width of the street is the same as where the group has been setting up, in the parking lot of Danville High School. Kirchner said she contacted City Manager Ron Scott, and said “he’s willing and open to have that conversation.”

Russ Goodwin was also present Tuesday, on behalf of the farmers market. He said it opens the beginning of May and runs through the last week of September, usually from 9 a.m. to noon or 1 p.m. on Saturdays.

The farmers market set up shop in the DHS parking lot three years ago, and it’s gotten bigger each year, Goodwin said. In 2018, around 300 people came each Saturday morning.

“That would be 300 bodies coming downtown, and I can’t help but think foot traffic would be worthwhile to downtown merchants,” he said. “Usually, Saturday morning is not a big time downtown.”

Goodwin said the move hasn’t been discussed with “all of the farmers — the last time they were ready to go, and it fell through at the end. Dr. (Keith) Look (former DHS superintendent) was nice enough to let us go to the school.”

Goodwin said a priority for the market is continuity.

“One of the things we’ve proven to ourselves is continuity is really important. We’ve been at various places. We’ve been at the fairgrounds, on Third Street across from Derby Shoppe, now at the high school,” he said. “The more continuity you can give and the more people depend on you, the more will come. It will be nice to have a home in downtown.”

The fiscal court was supportive of a two-year contract initially.

Goodwin shared that the City of Corbin previously had 40 percent of its downtown with vacant buildings, before moving its farmers market there. “Now, it has 5-percent vacancies, and spun off three or four businesses from the market. It’s turned their downtown into a different area.”

He said there’s been some enthusiasm about bringing an artist to sell at each market, as well.

Magistrate John Caywood, who owns the downtown business The Derby Shoppe with his wife Martha, said, “When you were across from us, we changed our openings to 9 instead of 10 (Saturday mornings). You made enough foot traffic where we could make that investment in staff, so I can attest to that.”

Goodwin said the group needed to know something over the next couple of weeks or within a month, due to planning needs.

“I was against this before … and it didn’t pass,” Magistrate Phil Sammons said. “But after giving it a lot of reconsideration … and (Goodwin) is for it. And I don’t have a business downtown, but we have two magistrates that do, and they seem to be supportive of it. I’ll give you my proxy, Judge.” Sammons had to leave the meeting before it ended.

Magistrate Jamie Gay said he’s a big fan of seeing that area of downtown “being not just a farmers market, but a marketplace on Saturday mornings, as much as we can.” He’d like to see artisans and crafters set up shop and sell their wares, in addition to farmers.

Goodwin said there has also been some discussion of having an evening market.

Magistrate Jason Cullen asked about guidelines that apply to who can sell. “I wouldn’t like it to turn into a big section that is nothing but food trucks and clothing vendors. That kind of stifles what we’re trying to do with downtown as well.”

Goodwin said right now, the group is serving Boyle County farmers and all contiguous counties. “Mercer, Washington, all the ones that touch Boyle, farmers can come from them,” he said.

Magistrate Tom Ellis said Cullen “really brings up an important point, the types of folks jurying that can be there. Can you all development something? You’re going to have a certain number of parking spots on Second Street, a time frame. You could stipulate what qualifies them to be here …”

“They have that in their organization already, within the structure,” Kirchner said.

Since there was already a motion on the floor, Gay said he was willing to make a second motion relating to “overseeing management and who gets to set up shop at the market.” He asked if the court needed to “integrate the CVB and the Heart of Danville in that process as well, basically a committee …”

Kirchner said that can be discussed. “We could have a seat on the farmers market board, or a separate standing committee. But I’d look to the farmers — they’ve been doing this for so long, I’d like to see what they think.”

“To follow up, if you don’t have it down, extraordinarily specifically, that guy is going to come from Georgetown, Kentucky with his honey shop and he’s going to say, ‘How do you have the right to keep me out of here?’ And you will say, ‘Well, officer so-and-so is here to tell you,’” Ellis said.

“I don’t think we even need that,” Kirchner said. “I think we can be in the driver’s seat and head those things off.”

Ellis said, “I caution you on that.”

The motion was passed unanimously, contingent upon the city agreeing to the closure of Second Street for market Saturdays.