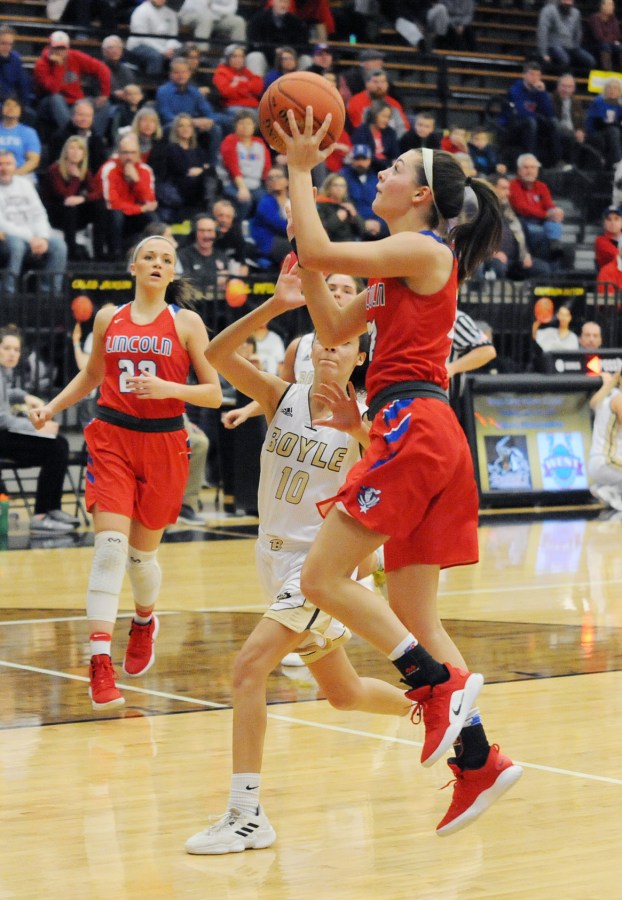 Lincoln County won Friday’s girls basketball game 75-60 at Boyle County, but the result wasn’t anything like the team’s first meeting earlier this month.

“I thought we came out well, really we came out and did what we’ve been doing the last two or three games,” Boyle head coach Greg Edwards said. “We’ve been playing really good basketball. I just thought tonight in the first half carried over. I thought we were active, kids were working hard, we made shots, we moved the ball. We did a lot of good stuff.”

The Patriots, on the other hand, are coming off a prolific 3-game tournament in the Toyota Classic, where they took down George Rogers Clark, No. 1 Scott County and Simon Kenton. Friday’s win was the 13th in a row for head coach Cassandra McWhorter’s team.

“We definitely didn’t start the game or play the first half the way that we’re capable or how we’ve been playing basketball,” McWhorter said. “I don’t know if the halftime speech was it, I didn’t really get after them too hard. They know they weren’t playing to their capabilities.”

But as the third quarter was about to begin, McWhorter gathered her team and gave them the choice: Play hard or go home.

“I think right before we went out for the third quarter, I huddled them up and threatened them with going back home instead of staying for our boys game,” she said. “I said we can go back to our gym and have practice if we’re not going to put forth more effort. We weren’t playing to the level of our capabilities.”

Her team responded, going on a 14-2 run to extend its lead to 56-33. Star senior Emma King scored eight of her game-high 21 points in the third quarter.

“Lincoln’s just hard, they’re just hard to play because they’ve got scorers at all five positions and, in my opinion, Miss Basketball,” Edwards said. “It’s hard to defend that but I thought, for the most part, we did a pretty good job. They’re going to make some shots, obviously. They’re a top team in the state. I’m proud of our effort, I thought we played well. We had a couple spots in the second half where we didn’t get rebounds, but I’m pleased with our team’s effort.”

But Lincoln would slow down at the end of the third quarter, in part due to senior Maddy Boyle going down with leg cramps.

“It was good to see that first 3-4 minutes there,” McWhorter said. “It was a weird third quarter, Maddy cramped up and there was a lot of stoppage in the game, whistles. It was hard to stay in that rhythm and flow. I just hope we come out (Saturday) night more ready as we match up with Casey.”

Edwards said he’s happy with the way his team performed against one of the best in the state, and said his team is trending in the right direction.

“We went from scoring 11, kind of shell-shocked, to tonight, where we competed,” Edwards said. “We came out with the right frame of mind, all good things you want to see as January winds down. I’m real happy with where we are.”