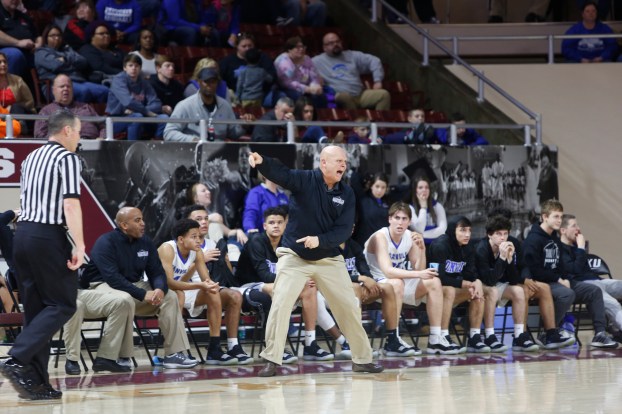 RICHMOND – This is what Danville’s offense looks like when the shots don’t fall. Spoiler alert: It isn’t pretty.

Defense has driven Danville’s success so far this season, and they hoped it would help them drive deep into the bracket at the boys All “A” Classic. But it couldn’t save them from what happened on the other end of the floor Friday night.

The Admirals managed only 11 baskets as they posted their lowest point total in more than two years in a 47-30 loss to Shelby Valley in the quarterfinals of the statewide small-school tournament at McBrayer Arena.

They missed one shot in the paint after another as they saw their 11-game winning streak and their dreams of the school’s first All “A” championship go up in smoke.

Danville made only two of its first 20 shots from the field – missing 15 attempts in a row during a stretch of more than 10 1/2 minutes. The Admirals finished at just 23 percent from the field.

Coach Ed McKinney wasn’t left at a loss for words, but he was left without a definitive answer for why his team was as cold as the night air outside the arena.

“It’s just frustrating for all of us. We just couldn’t make a shot – and a lot of them were point-blank,” McKinney said. “We’ve seen it before, but we haven’t missed that many easy ones. I thought in the first half (of the first-round win Thursday over) Elliott County we missed a lot of easy ones. I’ve always thought in these bigger gyms it’s a little different finding the rim, the depth perception’s different. But, gosh, when you’re right on top of the rim … .”

Danville shooters were right on top of the rim time after time, and time after time they came up empty. An unofficial accounting shows that the Admirals missed 18 of 24 shots from the block or closer.

They finished with less than half of their season average of 68.8 points per game, far below their season shooting mark of 48 percent from the field and with fewer points than they have had in any game since a 48-30 loss to Dixie Heights on Dec. 19, 2016.

McKinney said Shelby Valley’s defense was good, but it wasn’t the only reason why Danville’s shooting was so bad.

“They were long, they were physical, I thought they did a good job on us. But I still think we had a lot of shots right around the basket that just didn’t go in, and then you start pressing,” he said.

The trouble started right from the start, as Danville (19-2), which was looking to reach the All “A” semifinals for the second time in 10 trips to the tournament, missed layups on two of its first four possessions.

Dante Hayden hit a pair of 3-point shots to give the Admirals a 6-4 lead, but they never led again and tied the game only once at 7-all after Shelby Valley (20-3) scored three straight points.

Hayden’s second 3 at the 5:51 mark of the first quarter was Danville’s last basket until DeShaud St. Martin got a layup to go down with 3:09 left in the second quarter. The Admirals missed 15 straight shots during that stretch, including seven shots that were layups or similar shots, as they fell behind 19-9.

In one possession during that cold spell, two Danville shooters saw three shots from point-blank range roll off the rim.

“I don’t know how to explain that,” McKinney said.

The Admirals had 15 offensive rebounds but only seven second-chance points.

“It makes you not a good play-caller,” McKinney said. “I don’t know what to run.”

Shelby Valley stretched a 23-15 halftime lead to 30-18 in the first 3 1/2 minutes of the third quarter, but Danville rallied with seven straight points on two baskets by Ethan Wood and a three-point play by Zach Thornton to pull within five.

The Admirals were still within striking distance at 36-28 early in the fourth quarter, but they were shut out for the next 5:12 – they missed another six shots in a row and turned the ball over three times during that stretch – while the Wildcats scored nine straight points to secure their spot in the semifinals.

Shelby Valley shot 46 percent from the field, but the Wildcats fell just below the average of 49.7 points per game scored by Danville opponents this season. The Admirals have held 13 of their 20 opponents below 50 points.

Cody Potter led Shelby Valley with 16 points, well below his average of 24.3 per game.