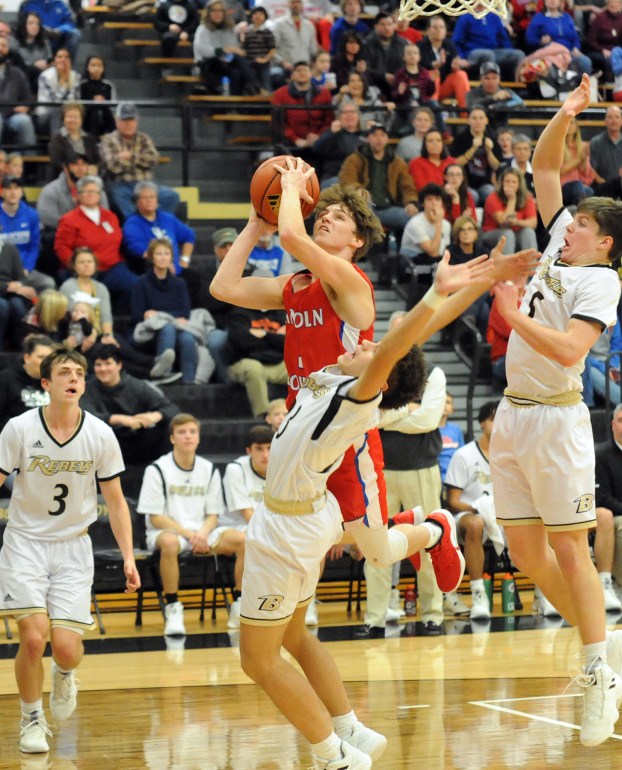 Lincoln boys even series with Rebels

The Patriots rallied from a nine-point first quarter deficit to beat the Rebels 68-56 on the road to improve their 45th District record to 2-2.

The two teams were near even at halftime, with Boyle holding a 29-27 lead entering the break. But just before halftime, Boyle starting guard Grant Hotchkiss left the game with a shoulder injury and did not return to the game.

Hotchkiss’ absence slowed the Boyle offense in the third quarter, while the Patriots continued strong on offense. Blake Smith scored 17 of his game-high 23 points in the second half as the Patriots took a 41-38 lead into the fourth quarter.

That lead quickly ballooned to 10 points before the Rebels rallied to cut Lincoln’s lead to 52-48 in the middle of the quarter, but the Patriots again made a run.

“We made some breakdowns there, after we cut it to four,” Boyle assistant coach Dennie Webb said. “We did some things that just weren’t smart, gave up a couple buckets that we shouldn’t have. We didn’t finish, we put a lot of energy into getting it down to four, then just let it go.”

Lincoln head coach Jeff Jackson was proud of the way his team fought to retake the lead and secured it in the second half.

“I thought our kids played hard, were focused,” he said. “We got off to a rough start but we came back and we battled. I thought we did some good things on both ends, it’s just always a great rivalry and a great game. I’m just proud of our kids and the effort that they gave.

“Just hopefully we can continue to get better, we have a lot of work to do. We’ve got to come in ready to go, have good practices, be efficient and hopefully we’ll continue to play well. I was real proud of our effort, all eight kids played and gave good effort. It’s a good win for us.”

The Patriots’ offense opened up when Smith started hitting from beyond the arc — he didn’t attempt a three in the first half — and that’s no coincidence.

“When he’s stroking it, it opens it up for Jaxon (Smith) and Elijah (Frye) to get in the lane,” Jackson said. “I thought everybody played well. Blake, Bryson Yaden and Darius Napier are seniors, they played hard. Blake, when he shoots it and Riley played well, they both had big games. Riley Bodner is a big factor for us because he’s long and can block shots, get rebounds and score a little bit. I thought it was a complete team effort, from all eight kids who played. Just real proud of our kids.”

The Rebels fall to 2-3 in district play, but Friday’s mood was low without knowing Hotchkiss’ diagnosis.

“Grant goes out, that kind of throws your rotations off, something we haven’t had a chance to work on,” Webb said. “Not to say that was everything but it’s a part of it. The kids fought and played hard.

“I’d say this year’s team has, as a whole, has had more adversity than we’ve had in awhile just with injuries and other things going on. But they keep practicing hard, keep playing hard and we’ll see what happens, rally together. The kids work hard, they know how to battle through adversity. But with our district, the slightest little error and you can be done or you get beat like we did tonight. You’ve just got to be sharp and ready to go.”