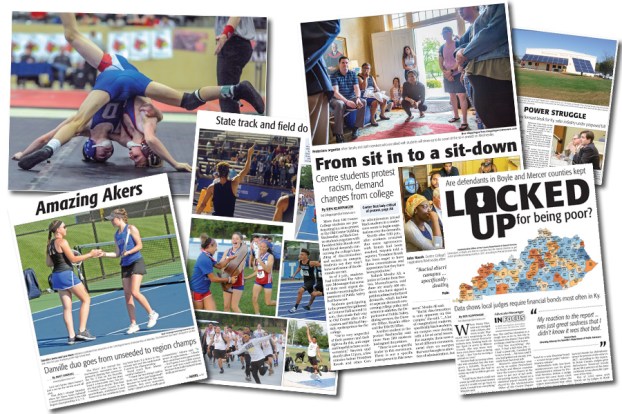 The Danville paper earned a pair of first-place awards in its mid-size daily division: One first went to Editor Ben Kleppinger for best editorial writing; the other went to Sports Editor Matt Overing for best sports picture.

The judges said Kleppinger’s editorials had “lots of balance and background for the reader and a strong opinion in closing. All the hallmarks of an engaged newspaper.”

The winning entry consisted of three editorials: one encouraging Boyle and Mercer officials to work cooperatively on solving local jail problems; one calling for honest conversations in the Danville Schools community after Superintendent Keith Look was let go; and one warning Danville and Boyle County governments not to repeat mistakes of poor communication and bickering when it comes to their joint parks and recreation efforts.

Overing won his first-place award for his photo of Danville wrestler Morgan Sallee and Christian County wrestler Austin Gibson, both on their heads at the same time as they wrestled each other in the second round of the KHSAA state wrestling tournament.

“Great photo, both athletes on their heads at the same time?” the judges wrote. “Are you kidding me. Definitely first place! Great job!”

Overing and contributing sports reporter Mike Marsee nearly claimed another first for the paper in the best sports picture essay category. Their photo package from from the state track and field championships was “a very close second place,” according to the judges. “Good faces, strong composition, sharp and clear.”

Contributing columnist Eric Mount won second place for best column writing. His winning columns addressed the nationwide problem of cash bail for poor defendants and the continuing difficulties of eliminating the problems of racism identified 50 years ago by the National Advisory Commission on Civil Disorders.

“From unseeded to regional champs? That’s a winning story no matter how you write it,” the judges said. “Good sense of place and personalities. Good job.”

Kleppinger got second-place awards in the enterprise and investigative reporting categories.

His enterprise story headlined “power struggle” detailed a legislative battle between independent solar companies and government-regulated power companies over how much money solar power should be worth. The story gave readers “a well-reported and timely analysis of a pressing state issue being considered by lawmakers,” according to the judges.

Kleppinger’s investigative reporting award came for his in-depth reporting on the use of financial bonds in the 50th District and Circuit courts in Boyle and Mercer counties. The same story also won Kleppinger the 2018 Media Award from the Kentucky Association of Criminal Defense Lawyers last year.

“… overall, the reporter puts this important issue affecting a vulnerable population in context from recent history and what surrounding counties are doing,” the judges wrote. “Good sourcing and quotes — from the woman who went to jail to the lawyers. Nice original analysis of court records to give a sense of where this could be happening in your community.”

Advocate-Messenger Reporter Bobbie Curd won second place for best ongoing or extended coverage for her reporting on pollution issues in Herrington Lake that residents allege are due to coal ash stored at the E.W. Brown power plant. She also earned a third for best investigative story or series for the same reporting.